The most anticipated individual race of the day turned out to be as good as expected. Eastern Maine Champion Aaron Willingham went to the front like he has done in all his races this fall, and was followed by Bryce Murdick of Falmouth, Lewiston's Osman Doorow, Mt Blu'es Dan Lesko, Scarborough's Jacob Terry, Caleb Lord of Hampden & Western Maine Champion Iid Sheihk-Yusuf of Deering and his teammate Yahya Hussein as the hit the bowl for the the first time.

After the mile heading up the superhghway, the pack had dropped Hussein & Lord but it was still anyone's race with Willingham setting the pace.

With a little less than 800m to go as the entered the bowl for the second time it was still Aaron WIllingham in front followed closely by Bryce Muridck & Jacob Terry with Sheikh-Yusuf about 5m back in fourth place as they prepared for the final kick.

Murdick made his move on the downhill section in the woods, and emerged in the lead in his attempt to win the race. Murdick held the lead but was unable to shake Willingham & Sheikh-Yusuf as the hit the final stretch all with a chance to win.

Murdick recalled the finihs after the race, "I got the lead coming up the hill at end, I was focused on moving my arms to keep my legs going, I had tunnel vison, then as we got closer to the finish I saw a silhouette."

Willingham dug down and found the extra gear as he would come from behind to take it in the fastest time of the day, 16:00.62, Murdick held off the hard charging Iid for the runner-up finish, the margin between the two was just .61 seconds.

"I have no idea, I usually don't have a kick." Willingham said of his finish that took him to victory. "I just thought this is states and last race of high school."

Terry was unable to match the closing speed of those in front of him but he finished a strong 4th in 16:05.18. Dan Lesko was next in 5th place, followed by Gorham junior Jesse Southard in 6th. Massabesic senior Michael Aboud ran 16:33.34 for 7th holding off Osman Doorow. Hampden Academy sophomore Paul Casavant ran a strong race to finish 9th, 16:35.82, while Yahya Hussein rounded out the top 10. 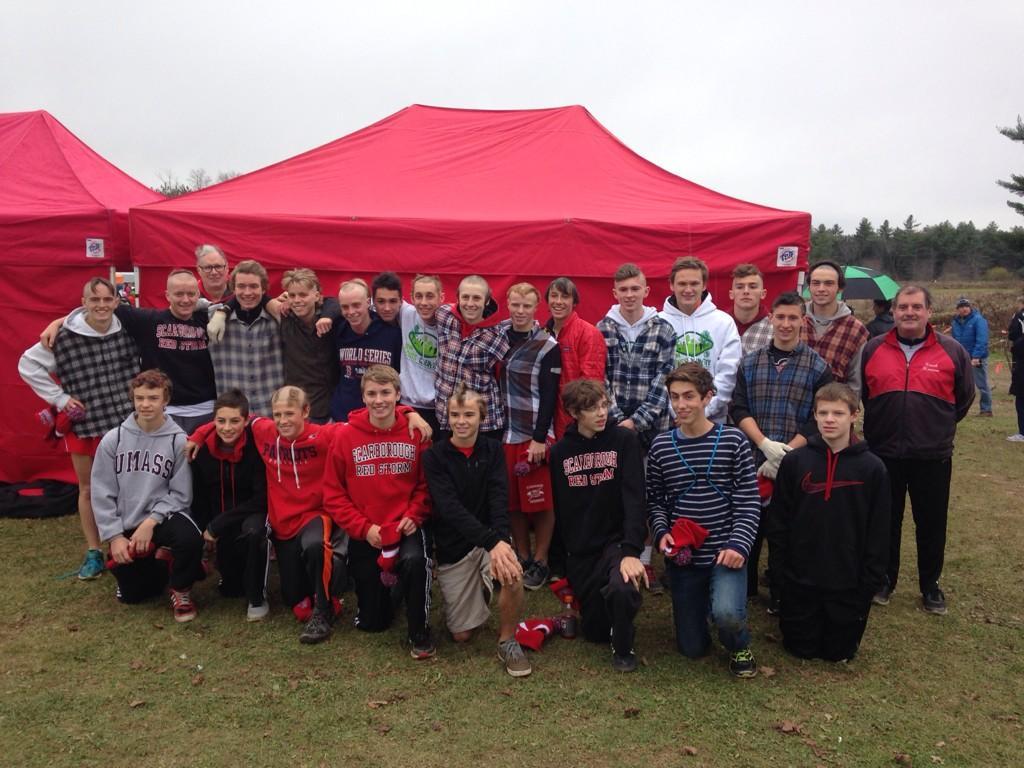 The boys team race came down to the three Western Maine teams Falmouth, Scarborough & Massabesic as expected. Early on all three teams established there positions and it was neck and neck. Over the final mile the Red Storm of Scarborough working as a pack was able to seperate from the Yachstmen & Mustangs to open up enough of a gap to go on to win by 13 points over Falmouth, with Massabesic a tantilizing two points back in third. The title was the first for the Red Storm since 2011, but overall their 7th title in the last 11 in Class A.

Scarborough was paced up front by the fourth place finish of senior Jacob Terry. Junior Connor Doherty had the race of his life in the tough conditions, usually Scarborough's #4 runner he would finish 14th overall as the Red Storm's #2 runner today. He was closely followed in 16th by Colin Tardiff & Andrew Sholl in 17th.  This gave Scarborough four runners in front of Falmouth's #3. Senior Jacob Bloom who faded in the final mile at regional last week got his redemption as he powered home in 22nd to secure the title.

Falmouth put up a valiant effort in earning the runner-up plaque, they got a huge effort up front from senior Bryce Murdick who narrowly missed winning the race as he was just outleaned at the line. Murdick's low stick was huge as the next Falmouth runner didn't cross until 15th with junior Sean Soucy. Falmouth packed there remaining scoring runners in spots 21-25, with Spencer Brown, Scott Lambert & Josh Simesnky.

Massabesic was paced up front by a 7th place finish from Michael Aboud, he was followed in 12th by Andrew Mongiat in 11th place. Freshman Alexander Sweet had another strong performance in placing 20th followed by Remington Gaetjens in 24th. Rounding out the scoring for the Mustangs was Donovan Duffy in 31st.

The individual race in Class A had several contenders capable of winning the race and that played out in the early stages of the race.

As the runners hit the bowl for the first time there was there was a huge pack of girls led by Elizabeth Labun of Hampden, Tessa Cassidy of Brunswick, & Anne Guadalupi of Cony. Also in the lead pack was the Westbrook duo of Halee Phelps & Gabbi Pabst, Casey Loring of South Portland, Mira Wyman of Falmouth.

Not much changed after the mile as they headed up the super highway, Cassidy & Gaudalupi were at the front. Joining the lead group was Maddy Doyle of Marshwood, along with a pair of freshman Anna Slager of Gorham & Katherine Leckbee of Mt Ararat.

As the race entered the bowl for the second time the race was down to three as Guadalupi, Doyle & Phelps had broken away, the champion was sure to come from this group. There was a 15m gap back to Cassidy who was followed Leckbee who was running the race of her young career.

It was Phelps who was able to make her move with 600m to go, only Doyle would try to go with her but the runner with excellent track speed was able to pull away to win in 19:10.42. That time was the fastest on the day between three class races and a personal best

Phelps who was 5th last week in the Western Maine Regional a week ago wasn't one of the pre-race favorites.

"I just told myself I could do it, and stayed positive." Phelps said when asked how she stayed with the leaders and was able to pull it out.

Doyle was just 2 seconds back in 19:12.53, her effort was good for the second fastest time on the day. Sophomore Anne Guadalupi of Cony was next in third place, 19:18.90.

Cassidy crossed the line in fourth then came Katherine Leckbee. Leckbee's performance was a 47 second personal best, and her post season run was impresive 4th in the KVAC, 4th in EM Regional & 5th in the state meet. Following closely behind in 6th was Elizabeth Labun.

The next group was led by Casey Loring of South Portland, & Anna Slager of Gorham, they finished with the exact same time 19:46.78. Brunswick's Tiffany Tanner ran a strong race for 9th then it was Gabbi Pabst of Westbrook rounded out the top ten.

The Class A had lots of quality as 12 of the 25 individual New England qualifiers came from this race. 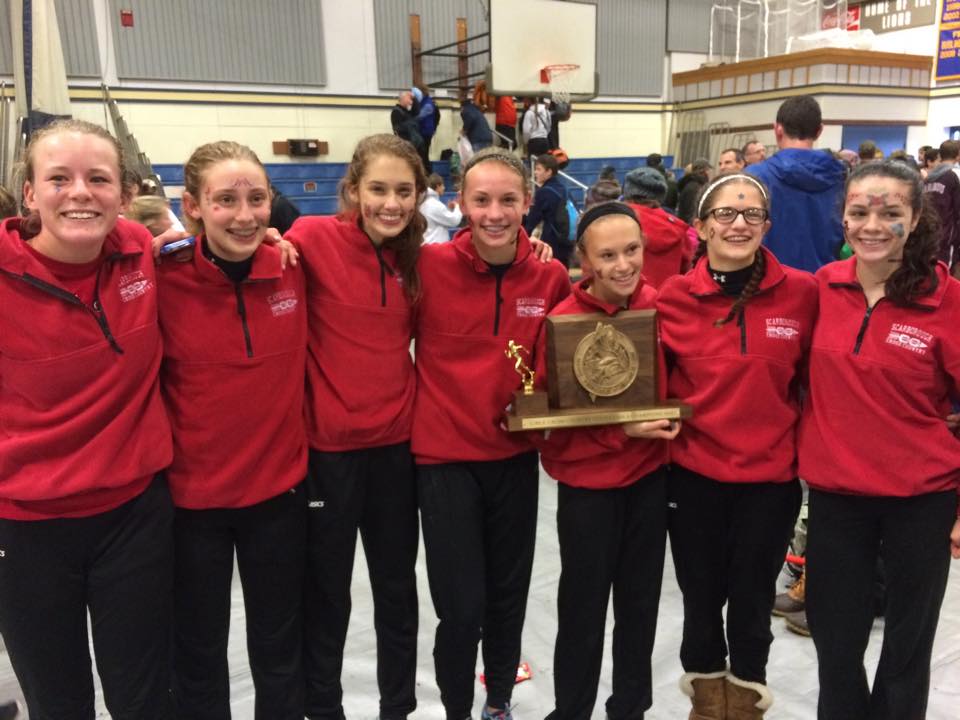 The girls state title was figured to be up for grabs coming into the meet with Massabesic a slight favorite based on the regional results. The race turned into a duel between Western Maine Regional champion Massabesic & Western Maine runner-up Scarborough. The Mustangs were seeking that elusive state title that they had come close to winning so many times, while Scarborough was hoping to peak just right and win with a young group.

Early on in the race Massabesic was controlling things, but Scarborough was lurking.  At the half-way point the Mustangs were still winning but the Red Storm weren't going away as there pack up front led by freshman Bethany Sholl continued to move up. As the teams went by the red shed, Scarborough had erased the early deficit, and looked like it was primed to win as their number 5 runner was running right with Massabesic's 5-7 runners. Over the final 800m Massabesic fought hard gaining back several spots, and once both teams had 5 runners across the line it was to close to call.

In the end, Scarborough pulled out the four point win 92-96 over Massabesic. The young Red Storm led by Sholl's 11th place had great support with junior Laura Volan in 14th, sophomore Marissa Carbone's 17th, & freshman Sam Saraceno in 18th. No state title is won with a great effort from the 5th runner, and Scarborough got just that from junior Morgan McKeown who finished 46th, three spots better than she did in the regional meet a week ago. Her time was a personal best by 26 seconds. With all 5 scorers runners back for next fall, Scarborough will enter 2015 as the favorite.

Massabesic fought to the end, leading the way was junior Emily Wasina in 13th, followed by senior Gabby Johnson in 15th. Junior Rachelle Morrison was the 3rd mustang across the line in 22nd & junior Brianna Drew followed two spots later. Closing out the scoring was junior Maquila Dimasrantonio in 35th. While they came up four point short this is a program that will be back and with 6 of their top 7 back will be looking to chase down the Red Storm in 2015.