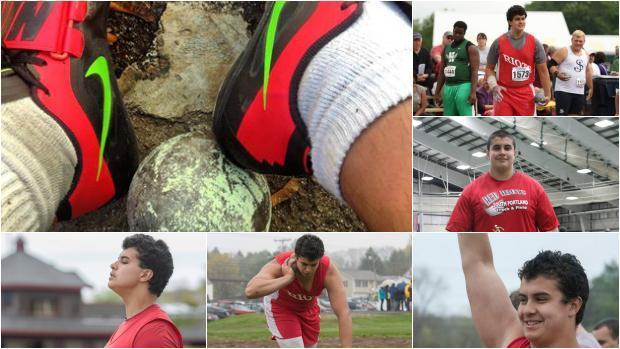 The indoor season is coming to a close, as the Class A and B State Championships kickoff Monday.  All I have to say, is what a crazy winter season it has been. I've seen some great competition over the course of the season, and though I wasn't able to compete, I had a blast. I saw guys on my team constantly improve through the out the year, and have some big time performances. Noah Blake, who has just been working so hard to become elite in the sprints and jumps. Jake Maloney who just impresses myself and the coaches by how determined he is to be one of the best Distance runners in the state, and we got to see him place 2nd overall in the Mile at south westerns, along plenty of other sprinters and jumpers working hard! And I'm so excited to see them all compete this coming Monday.

As most of you may have heard, the MRI results came back, and nothing is torn or broken, so I will have a outdoor season to look forward to. I still have a good amount of inflammation going on, on the inner elbow, but after PT and some more rest, I should be able to go soon. I have been looking at the injury as a whole, and I think there were some good things that came out of this. The injury aloud me to fine tune my technique, and change some things up, and to be honest, my form has never been better. I'm much wider out the back, and have more speed from the middle of the ring to the finish. Another thing is that I've strengthened my lower body by so much over this period of time. I've done a lot of leaping and bounding, plyometric workouts, things to make me more athletic and faster, and I've been eating much better. Other than my arm, I've never felt better at an athletic stand point. Lastly, I've been able to really buckle down and just solely focus on my school work, and I must say I've had a fantastic year academically. So, all sorts good things things came out of the injury.

I'm excited for outdoor this year. I want to have a big season in all three throws. And be very competitive. I'm looking to break the 70 foot barrier for shot put, throw in the mid 180's in discus and throw in the 160's in javelin. I've never competed in the javelin in a state meet, because last year I wanted too focus on just discus and shot, but I'd like to win a state title in the event or come very close to it. As far as shot put is concerned, I'm not going to put any pressure on myself or any unneeded stress, I just want to go out there, throw far, set a new best, and have a good time. Last year, I put so much pressure on myself and I think it affected my performance half the time. Lastly, for discus, I want the All-Time best in the event. I had many throws over the 180'3" mark set by Dan Smith, and I believe I'll break it by the time the season comes to an end.

As far as getting back into actually throwing is concerned, judging by pain levels and how PT has been going, I honestly see myself throwing in a couple weeks. The diagnosis for me after reviewing my results, was no throwing until the discomfort is completely gone. If it takes longer, it takes longer. There isn't really a big rush, but I believe the discomfort will be gone in that period of time. Another big thing is going to be building my arm back up to after words. Lots of forearm and grip workouts, and obviously putting my upper body workouts back into my routine. It will be nice to throw again though. It has been around 9 1/2-10 weeks since the last time I've thrown the shot and it feels very weird. Just think about doing something everyday for years upon years, something you love, then take 10 weeks off from it, and get back to me about how it feels. So strange! But I will soon enough.

I'd like to take the time to thank my coaches, and parents, and everyone who showed me support during this injury. It honestly means so much, and has really helped me power through it. The first couple weeks I was just extremely down about the whole situation, and people calling, messaging and talking to me just made all the difference. Coach Kahill played a HUGE role in all of this. He made sure that I stayed involved, that I helped others out as much as I could, and kept me going in the right direction. He got a sense of how much this season meant to me, and how upset I have been, and he kept me feeling like I was still part of the team. I think it was hard for him also, because we've been working with each other for so long, all leading up to this year..senior year, just for an injury to end the whole season. But, my point is that I'm very lucky to have him as my coach. Coach Stinson, Reardon, Owens, all also helped me keep a positive attitude through it all, and It's been very great having them all around me.

I will be working hard for the spring, and continuing to improve my technique as much as I can, and hoping for a full recovery soon, all in hopes for a big spring season. I wish everyone, and every team the best of luck this week at states, I'm very excited to watch!

Check out Danny's first practice session on 2/17 after he was cleared, let's just say, wow!