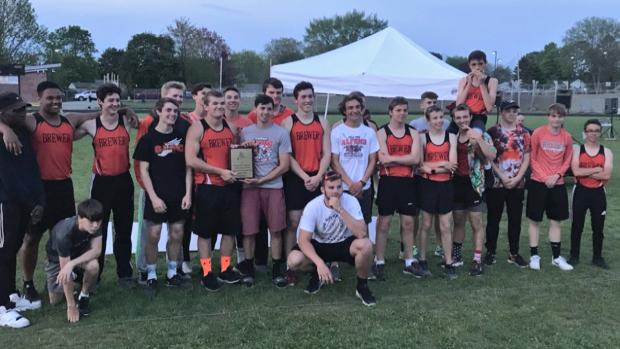 All season long, the Brewer Witches have relied on its depth in the throwing events to establish themselves as one of the top contenders in the PVC.

That proved to be a big factor in two more trophies getting added to the Witches' growing collection of track and field hardware.

Brewer, which hosted the large-school competition Friday, held off some tough competition in picking up a sweep, with the girls squeaking past Hampden Academy 142.75 points to 136 on a hot, windy afternoon.

Old Town and Mt Desert Island tied for third in the girls' meet with 79 points, with Bangor's 70.75 rounding out the top five.

The Witches wound up with a solid 36 points between the shot put, discus and javelin, with Lilly Blakeman powering a 1-4-5-6 discus finish with a toss of 110 feet, 9 inches.

Ashley Tanguay was victorious in the javelin for the Witches, coming in at 99-2 while Blakeman was also second in the shot put, which was won by Old Town's Claudia Damboise.

Ashlee Vilasuso wound up winning the 300 hurdles for Brewer, covering the distance in 49.01 while taking second in the 100 hurdles. Olivia Mosca also completed the distance triple, picking up silver medals in the 1,600 and 3,200 to go with a fifth-place run in the 800.

In the boys' meet, Jacob McCluskey continued his bounce-back season for Brewer, picking up two wins and a fifth-place finish to help the Witches pile up 115.90 points.

Hermon tallied 99 points to hold off Hampden (95) and MDI (87.50) in a three-team battle for second, while John Bapst concluded the top five with 55 points.

The efforts of McCluskey and Graham, who was fourth in the discus, were huge in helping Brewer overcome the throwing depth of defending league champion MDI.

Like the girls, the Brewer boys were able to prevail with strength in numbers, as McCluskey and Graham were the Witches' lone individual winners.

Andrew Gillette picked up a second place in the pole vault, clearing 11-6, while Jon Donnelly earned second in the 1,600 and fourth in the 800.

Bendix Gerling was also a silver medalist for the Witches in the 200.

Among the other multi-event winners were James Petersen and Zach Beaton of Hermon, Ben Cotton of John Bapst and Wyatt Lord of Hampden.

Beaton was victorious in both hurdle races and the high and triple jumps, while Cotton claimed the long jump and 100 dash.