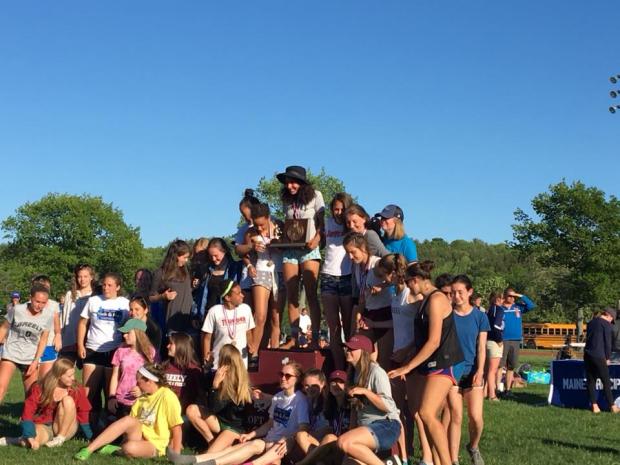 DOVER-FOXCROFT -- Ties are a rarity in track and field, particularly in championship competition where the combination of talent and depth typically rewards a team with hardware.

Both of those assets were on display for the Mount Desert Island and York boys on Saturday, and the end result was both teams sharing the first-place podium at Foxcroft Academy.

The Trojans and Wildcats shared Class B state championship honors, both accumulating 86 points while PVC champion Brewer was third with 66. Hermon and John Bapst tied for fourth with 39 points while Yarmouth scored 34.

The Wildcat boys can thank freshman Aidan Martin and Brewer senior Garrett Graham for finishing tied with MDI, as Martin won the javelin (159-11) and Graham the shot put (54-4.75), each time edging MDI's Croix Albee on their final throw.

The fact that York was a top contender was no surprise, as the Wildcats were favored entering the meet, but MDI coach Aaron Long admitted he believed his team would be somewhere in the fourth to fifth-place range when he seeded out the points.

But his Trojans are battle tested between track, football and basketball, having earned some hardware in all three sports over the last few years.

"These kids, they've been working hard the last several years and they've been on this stage before," said Long. "We've talked a lot about, it's (just) a track meet, we don't need to make it bigger than it is."

Albee wound up with three second-place finishes on the afternoon, and his 24 points were vital to MDI's success. "I wanted to throw a little bit further but when it comes down to championship meets it's where you place," Albee said.

Brewer managed to hang in until the late events but ran out of points after leading for some of the middle of the meet, and was hampered by the loss of sprinter Bendix Gerling, who was injured in the 100 dash.

Mt Desert Island's only individual winner was Griffin Maristany's 23.12 run in the 200, and the Trojans' Billy Kerley, Jose Chumba, Owen Mild and Maristany also claimed the 4x400-meter relay, which turned out to be huge as York exceeded its seeding and finished second.

Zach Westman was York's only other individual champ, taking the 300 hurdles in 40.24, but he and Jake Martin went 1-3 and Martin and Westman went 2-3 in the 110's, which was won by Hermon's Zach Beaton.

Another small nugget that helped the Wildcats came in the 800 after Waterville's Nicholas Dall was disqualified for too many steps inside of the curb. That not only allowed Cony's Travis Nickerson to take first place, it allowed York's Jacob Young to move up from eighth place to seventh, giving him and his 'Cats what proved to be a crucial point.

Cotton expected the 100 to be awfully close, and he took care of business in the prelims to assure himself a prime spot in the center of the track for finals.

In the girls' meet, it was the 1-2 distance punch of Todd and Provencher that gave the Greely Rangers 36 crucial points and powered them to a state title.

In both the 1,600 and 3,200, Freeport junior Lily Horne cruised to victories, but Todd and Provencher held off the rest of the chase pack, and their efforts in the 3,200 vaulted the Rangers in front to stay.

Belfast had led for much of the afternoon. Greely would also finish third in the 4x400 to salt things away, and Elizabeth Brown was its lone individual champ, clearing 5 feet in the high jump.

Erskine Academy senior Kaylee Porter, who will run for the University of Maine in the fall, won her third state championship in four years at 800 meters, covering the two laps in 2:20.70. Porter, one of the favorites, showed no mercy, bolting out to the lead early in the race and was never challenged.

"It's really important to me that I go out and give it my all especially towards the end of the season," said Porter, who will study nutrition at UMaine.

"The main thing that affected me was the wind, but I love running," said Porter, the beaming smile on her facing reflecting her passion for the sport.

Porter added that setting the tone and taking the lead from the gun was part of her plan, and it worked to perfection.

Cochran did go on to pick up two wins, sweeping the hurdles.