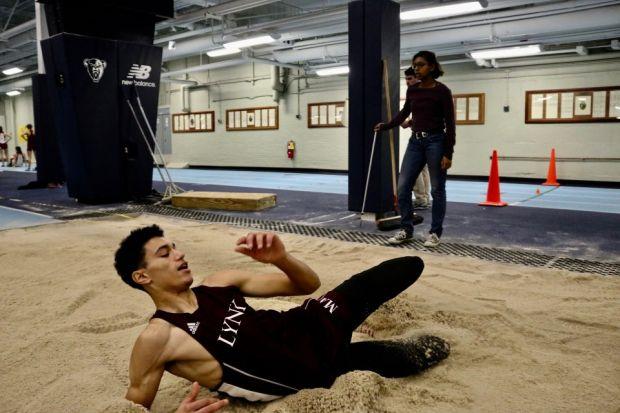 Cayden Spencer-Thompson has competed the last two indoor seasons unattached in open meets, and then suited up for the Mattanawcook Academy basketball team on the hardwood. In his senior season the Louisville bound senior decided to participate in both sports for his high school.

For the first time during indoor Spencer-Thompson suited up in the Lynx jersey for a meet inside the New Balance field house at the University of Maine. Cayden didn't waste long erasing two of the longest standing PVC-EMITL records in the long and triple jumps.

First up was the long jump where the conference record was set back in 1989 by Ellsworth standout Rob Pendergist at 22-8 1/2, Thompson went out over 23 a couple of times breaking the record with his best jump of 23-7 1/4. That mark is the second best of his career just off his 23-10 1/4 mark set at the New Balance Indoor Nationals last year. His jump currently ranks US #2 as of Monday Decemeber 24th.

The All-American triple jumper laid eyes on the 47-0 3/4 league record next. Brewer's Peter Phelan set that mark back in 1996 when he was the best jumper in the state, one that everyone was watching when he hit the runway. Spencer-Thompson jumped 48-10 1/4 finishing fourth at New Balance Indoor last winter, he opened his 2018-19 campaign with a mark of 47-4 1/4 good for sixth in the US, and surpassing Phelan's 22 year old mark.

Spencer-Thompson also erased the 22 year old triple jump record with a leap of 47-4 1/4.

In meet two defending Class A pole vault champion Sofia Wittmann opened with a leap of 9-6 to equal the state leading mark in the event. She also adding a win in the 55m hurdles crossing the line in 9.90 in the final.

Orono standout Camille Kohtala had a strong 16-11 1/4 opening season mark in the long jump, Kohtala was the Class B runner-up last winter.

Alyssa Elliott of Bangor hop skipped and jumped her way to the state number two ranking in the triple jump with her mark of 34-9 1/4.

The boys 55m dash featured some excellent opening season times as Wayne Dorr of Old Town edged Landyn Francis of Bangor as they had identical times of 6.82, Andrew Munroe of Bangor clocked 6.85, while Carter Tolmasoff was next in 6.86. Liang-Kang Lin of Old Town finished fifth in a strong 6.87, he clocked 6.81 in the trials.

Hampden Academy distance standout Helen Shearer got her indoor season off to an excellent start as she won the mile in 5:25.87 then doubled back with a strong 11:36.15 in the two mile to sweep the events. Her mile ranks her fourth statewide, while the two mile has her ranked third.

Hampden Academy senior Wyatt Lord started his campaign with a 2:02.35 in the 800m, that mark ranks second statewide.