The Untied States Olympic Track and Field Trials start on Friday afternoon at Hayward Field in Oregon. Several native Mainers and those with ties to the Pine Tree state will be competing for a spot on the United States team that will go to compete in the Olympic Games in Tokyo, Japan later this summer. I will be in attendance at Hayward Field as a spectator and hope to be able to share my thoughts here each day.

Day 1 schedule will see plenty of action as former Bates standout David Pless competes in the shot put qualifying round. Pless enters with a mark of 21.13m which is tenth best amongst athletes entered. Lewiston's Isaiah Harris is one the best hopes to make team US in the 800m. Harris has a best of 1:45.50 on the year but has raced sparingly In the build-up to the Trials. In the latest form chart on Track & Field News Harris is ranked fourth. In 2016 as a collegiate freshman he placed 6th in the 800m final. Joining Harris in 800m race is former Brunswick High School 800m state champion Mitchell Black. Black who was a four time NCAA Division III champion at Tufts was the last athlete into the 800m with his 1:47.43 effort run a week ago.

Rachel Schneider will get her Olympic Trials underway with the first round of the 5000 meters. Schneider who announced prior to the Trials that she was parting ways with sponsor Under Armour has the fifth fastest qualifying time with her 14:52.04. She'll run in heat 1 looking to finish in the top five to automatically advanced to Monday's final. 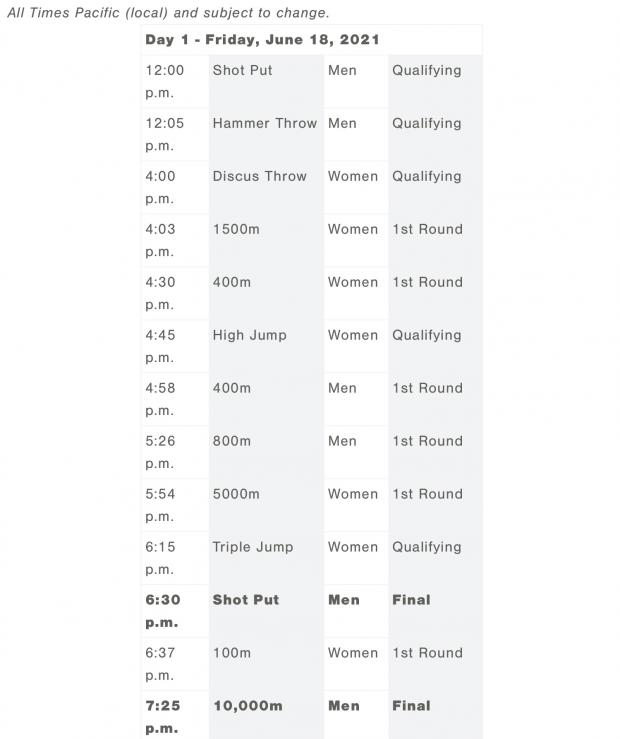