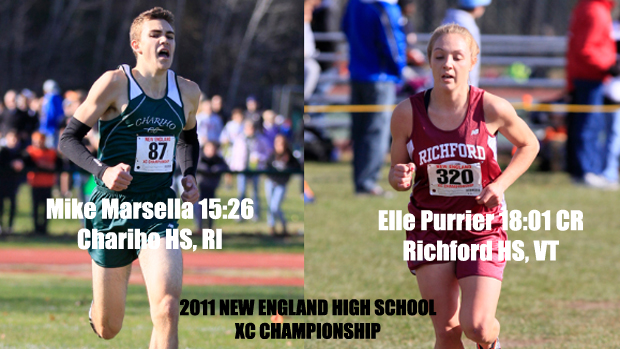 Running at the front of the race is nothing new for Elle Purrier (Richford, VT), and she showed today at the NE XC Championships that she is comfortable doing it. Purrier the D3 Vermont state champion, led the race from the gun today and never looked back on the Ponaganset covered bridge trail course. When the race was over Purrier had crossed first in 18:01, taking 13 seconds off the course record, it was also good for a 10 second victory over runner-up Molly Keating (Lasalle, RI).

The junior from Richford was unfazed by the 5:30 first mile she laid down, although it took her by surprise. "I didn't expect to see 5:30 at the first mile" Elle would say post-race.  Purrier who won the D3 state championship in VT on the tough Thetford Academy course powered through the hilly part of course never relenting. I knew I had the race won when we went by the tennis courts the final time, I had saved enough in case she (Keating) came up on me. Purrier was shooting for a new pr (17:49) but came up short, but was very pleased with winning the title.

What's next for Purrier? A trip to the NXN regional meet 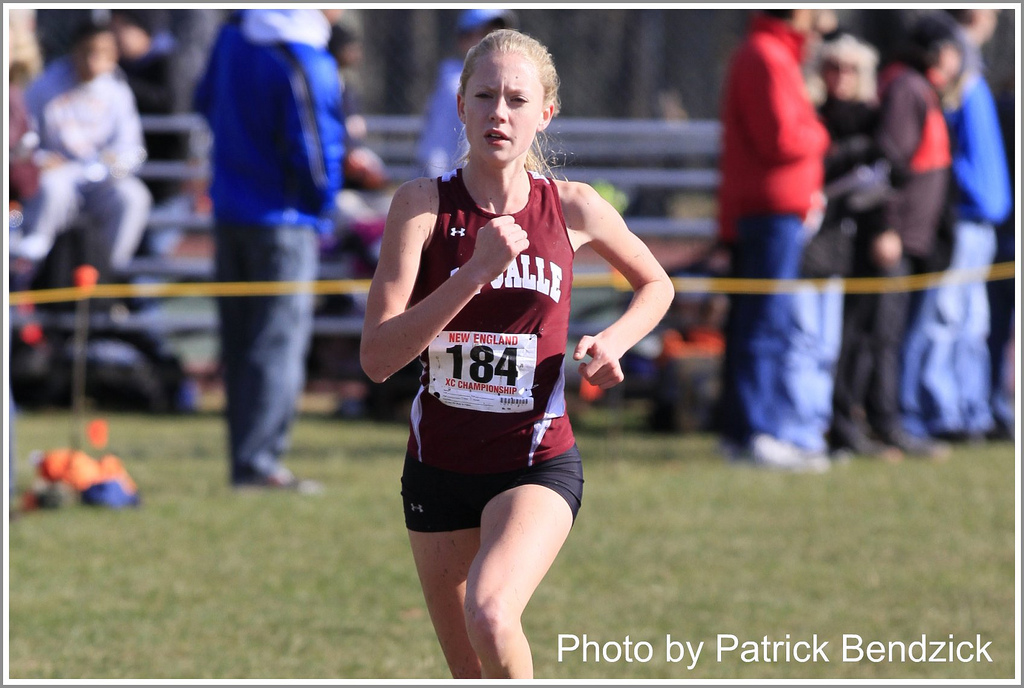 For LaSalle's Molly Keating despite finishing 2nd it was a great run for the senior from RI. Running on the course she had won the RI State meet just last week, Keating clocked a lifetime best on the course of 18:11, which was under the old record of 18:14. Keating nabbed the school record, as the record was held by former LaSalle standout Jeanne Mack.

Cheverus's Emily Durgin became the first female runner in Maine to earn All-NE honors 4 years in a row. Durgin the 2009 NE champ, and twice runner-up 2008/2010 started out conservately and moved her way up. Emily was very satisfied with her 3rd place finish, saying she is feeling much better, after struggling with anemia just a month ago that forced her to almost shut down her season, with her iron levels returning to normal so isn't the championship form. "In two weeks I hope to feel even better at FL." Durgin commented post-race.

Taylor Spillane (Champlain Valley, VT) was 4th 18:32, Spillane led her team to a repeat victory while Bethanie Brown (Waterville) who was only 5th fastest in the Maine State Championships two weeks had a huge race to finish in the top 5, Brown running xc for the first time this fall capped off her season in fine fashion.

US #22 Champlain Valley, VT repeated as NE champions led by the 4th place finish of Taylor Spillane (18:32). Despite having just 1 runner in the top 25, Champlain once again used a tight pack with runners #2-#5 finishing between 36th  & 52th place to tally 112 points.  They averaged 19:23.8 with the top 5 all running 19:42 of faster. NE runner-up went to LaSalle Academy who didn't win the RI State Championship just a week ago. LaSalle bounced back behind the runner-up finish of Molly Keating (18:11) while averaging 19:27 & all 5 scorers under 19:59. Coe-Brown Academy the NH Meet of Champions winner earned their first podium finish at the NE Championships with a 3rd place finish, freshman Hannah Parker 33rd (19:23) & senior Alex Archambault 34th (19:24) leading the way.

Having run on the Ponaganset course the previous two weeks allowed Chariho senior Mike Marsella to toy with some race strategies as he prepared for the NE Championship race. Marasella the RI State Champ learned a valuable lesson at the state meet a week ago, despite winning with a time of 15:50.7, he found that going out at 4:47 pace was a bit too much for him. "I'm glad I got to run on the course the previous two weeks, I knew I had to go out slower than I did a week ago, I was like 2:16 at the 800m mark" Marsella said post race.

Marsella watched a teammate take the pace out hard today but didn't panic. "I had a plan & followed it, I didn't get caught up in the fast pace, I was 4th or 5th at the mile."  After the mile Marsella moved up & joined Conor Rog & Matt McClitnock (Madison, ME) at the front.  Rog & Marsella started battling back and forth after the mile mark switching off the lead during mile 2, but as the hills started just before the 2 mile Marsella made his move. "I planned to go hard on the hills" Marsella said of his strategy, it proved to be a good move as he opened up a slight gap over Rog, one that he wouldn't relinquish.

Marsella & Rog broke away from everyone during mile 3 opening up the gap over the rest of the field, Marsella held off a strong kick from Rog to cross the line first in 15:26, a new personal best on the course, while Rog settled for the runner-up finish in 15:27.

Rog had nothing but compliments for Marsella post race. "It was a great battle between me & Marsella, it was great to get to race someone of his quality today."  Rog won the CT State Open championship on Tuesday in course record fashion, didn't think that race took to much out of him. "Obviosuly it would have been nice to race last Saturday to get a little more rest, but those are the breaks." The CT State Open meet was postponed due to a fresk October snow storm that postponed some of the state meets and made most courses unrunnable for over a week.

Matt McClintock of Madison HS in Maine made the most of his last NE XC race as the senior raced to a 3rd place finish. McClintock who dominated the Maine racing scene this fall, earned his first All-NE honors after a couple of disappointing races in future attempts.  Matt was right with the leaders as the hit the mile in 4:46, and tried to stick with Rog & Marsella in the 2nd mile but their pace proved to be too much to handle. "I knew that I had to stay focused after they broke away because their was a pack right behind me." He wouldn't let up, using his past race experiences as motivation.

Harry Warnick (Fairfield Warde, CT) nabbed 4th place with his 15:43 effort while Dylan LaFond of Manchester Central, NH who won the NH Meet of Champions title last week rounded out the top 5 with his 15:46 clocking.


US #39 Bishop Hendricken won their 11 New England team title with an easy win over the rest of the New Engalnd competiton as they tallied 116 points, 56 better than the runner-up. Hendricken coming off a win at the RI State meet once again ran well on the Ponaganset course. Leading the way was sophomore Colin Tierney in 20th (16:20) with freshman Michael Potter in 31st (16:32) providing a great run. Potter was the top freshman in the race. Hendricken averaged 16:39.40 with all 5 runners under 16:58. The runner-up trophy went to Fairfield Prep, CT who tallied 172 points, behind the runner-up finish of Connor Rog. Chariho, RI earned the last podium spot with 177 points, they were led by the individual champion Mike Marsella & 8th place Jake Kilcoyne (15:58).