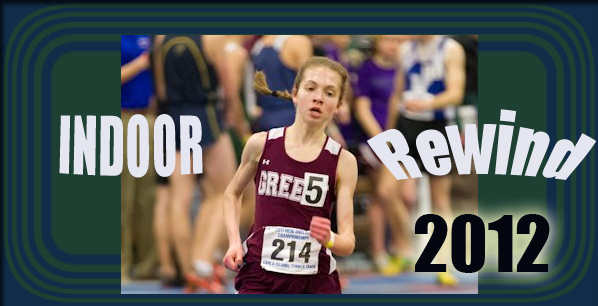 The Class of 2014 had a strong indoor campaign with Tifanny Gray (Triple Jump) & Carly McKenna (HJ) winning state titles. Gray was a standout jumper who had the ME#1 Triple & the ME #2 in the long jump. Tiffany broke the PVC record in the long jump this indoor season, & with her marks has established herself as one of the top jumpers in state history indoors already. Mckenna was tops in the HJ this winter at 5-3, she also scored in the hurdles at the state meet.

Distance runners Aleta Looker & Kirstin Sandreuter had outstanding seasons. Looker was the state runner-up at 800m as well as 5th place in the 2 Mile. Aleta later went on to a 5th place finish in the 1000m @ the New England meet then capped her season with a personal best ME#2 2:16.04. Sandreuter had a record breaking year that saw her take down the WMC Mile & 2 Mile records. Kirstin ran finished 2nd in both the mile & 2 Mile @ Class B States, she then went on to a runner-up finish in the 2 Mile at the New England Championship meet, breaking the 11 minute barrier for the first time.

Other standouts ranked in the top 5 of their respective events state wide were Edie Pallozzi (Deering) in the 800m, she was the Class A runner-up at the same distance. In the 2 mile Brittany Bowman (Camden Hills) was ranked #3, she was 3rd in both the mile & 2 mile at the Class B state meet. In the shot put Thornton Academy's Kaeleigh Harrison was ranked #3, matching her finish at the Class A state meet. Rashad Zagon of Deering equalled the #2 jump in the state this winter, she was the A runner-up at states. While Traip Academy's Jocelyn Lorrey was ranked #4 in the triple jump with a mark of 34-10 1/2, she also broke the WMC record.

Click each event for complete listing of every athlete