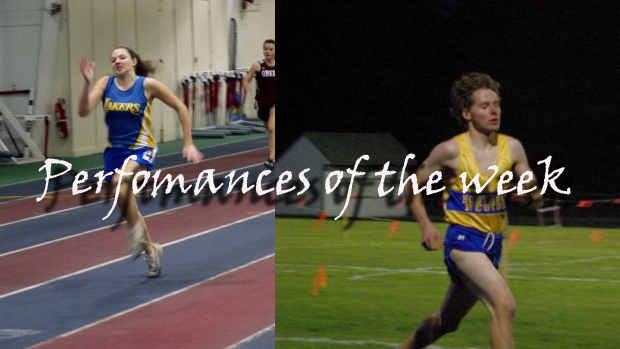 Freshman sensation Kate Hall of Lake Region had a great meet last week, she scored three individual wins (100m, 200m, LJ) her mark of 25.64 is the top time in Class B, it broke the Lake Region school record as well. Hall added a state leading and school record jump of 17-0 in the long jump, additionally she add a 12.54 win the 100m dash. Hall who won 3 events at the indoor state meet is on pace to add 3 more outdoors. On the boys side Chase Brown of Boothbay, had a great week setting two personal bests as he clocked 4:27.63 in the 1600, which ranks him #2 in Class B  & 5th in the state, Brown added a fast 3200m of 9:37.77, which ranks #2 in the State. Chase will who will have to battle Matt McClintock in the distance races to win a state titles, looks primed to clock some fast time in the next 2 weeks. Congratulations to both Kate & Chase on being selected as the Maine Running Company Performance of the Week