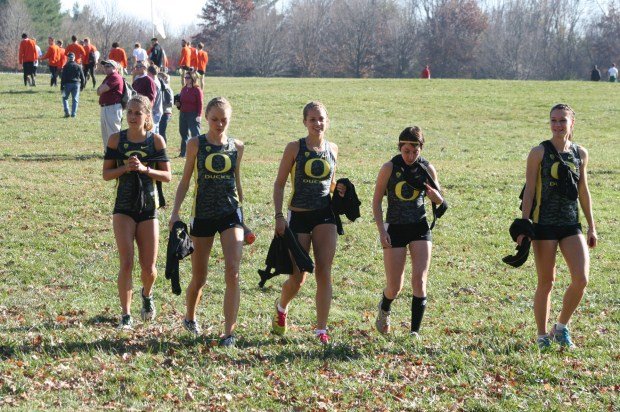 Womens: Maine's lone representative was University of Oregon's Abbey Leonardi. Leonardi competing in her first national championship was the Ducks 7th runner finishing in 162nd place. The freshman who ran for Kennebunk HS last year clocked 21:12.2 for the 6k course. While Abbey didn't figure in the scoring for Oregon, her team ran very well in front of her as they took home the national title by 69 points. Interesting stat, she was the 2nd best 7th runner in the field.

There was plenty of drama though in deciding who actually won the national title. The Oregon woman originally though they had won the title, but when the results became official Providence had been declared the winner by 6 points over the Ducks. However after careful inspection the Ducks #2 runner Alexi Pappas who placed 8th was left out of the race, wih her added back in the title was back with Oregon. Check out the team reaction

Mens: Oklahoma senior Riley Masters competed in his first XC National meet for the Sooners helping them to an 8th place team finish. The former Bangor HS standout worked his way up over the 10k course running 30:30.5, he was the 3rd runner for his team.

Purdue Freshman Matt McClintock has a great showing in his first ever National meet experience, as the true freshman started out in the back of the pack and worked his way through the pack over the 10k course. Matt would finish 103rd overall running a personal best 30:45 for 10k.  He was the 11th best freshman in the field. At the 2k mark of race McClintock was as far back as 208th 3k into the race but was able to move up over the races final 7k

Mens:  Bentley University senior Craig Robinson competing in his first NCAA XC Nationals ran to a 185th place finish. Robinson a former Scarborough HS standout covered the 10k course in 32:35, he was the 4th runner for the Falcons. At the halfway point Robinson had covered the first 5k in a fast 15:35 whihc had him in 170th place, he fell back just 15 spots over the next 5k.

Womens:  Haverford freshman and former Cheverus HS runner Fiona Hendry has a great race to lead the former Maine HS contingent. Hendry placed 23rd overall as she covered the 6k course in 21:44 to earn All-AMerican honors in her first national meet. She led her team to a 13th place finish.

The Bates women were the only team from Maine competing, the Bobcats had a strong showing as they placed 19th overall. Junior Gabby Naranja was the top Mainer on the squad as she was the 3rd runner placing 129th (22:57). USM's 2011 All-American Molly Carl had a tough race as she finished 190th covering the 6k course in 23:24.4

Mens: Bowdoin College junior Sam Seekins ran his way to his first All-American award at the D3 National XC Championships via his 17th place finish. Seekins who starred at Erskine Academy in HS, covered the 8k course in 24:51.2. His teammated Coby Horowitz who placed 9th, as the Bears placed 16th overall in the team race.

Bates College was the top team from Maine as the Bobcats put it all together behind junior Tully Hanan's 5th place finish to finish 6th place one spot higher than they did a year ago.