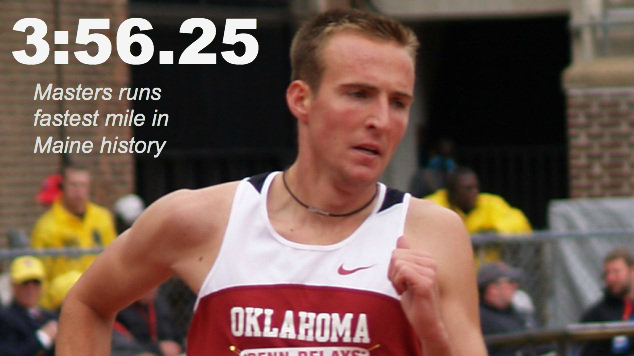 Former Bangor HS runner Riley Masters currently at the Univeristy of Oklahoma, but running unttached this winter won the Tyson Invitational Mile @ the University of Arkansas on Friday evening. Masters clocked a huge personal best of 3:56.25 in winning, the time currently ranks him #2 in the US/World behind only Galen Rupp.

What does Masters think about the World #2  "I try not to invest too much into the stats like that. It's fairly arbitrary since it so early in the year. It will be cool to know I'm #2 tonight, I'm sure after that mile in Washington gies off tomorrow I'll move down a few spots."

Before the race, Master's personal best was 3:57.74 run just 2 weeks ago at the Terrier Classic, where he finished 3rd in the same race Galen Rupp ran the 5th fastest indoor mile of all-time 3:50.92.

"The race was actually set up for one of my teammates Frezer Legesse to run a time that would get him into nationals. Harasyn was suppose to take the pace through 1k, and I was supposed to take over from there and go trhough 1300-1400"- explained Masters.

"I ended up feeling well enough with a lap to go to finish the race, luckily I ended up with a personal best." Masters said via text post race.

Masters next race will be a 2 Mile race at the Millose Games where he'll take on Bernard Lagat, who will be aiming the get back his American Record in the event. It's safe to say that Riley should finish that race with a new personal best as well, his fastest 2 Mile is from HS, a 9:38.