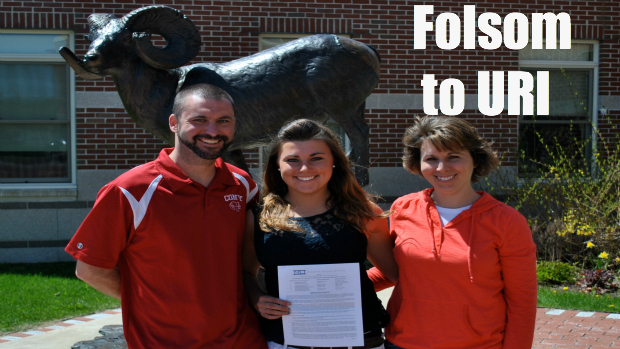 Augusta- Cony’s Lindsey Folsom has signed a scholarship offer with the University of Rhode Island Rams (Rhodies). “It’s a big weight of my shoulders,” Folsom said of her decision. Over the past few months she has made several official visits while attempting to narrow her school search. In March she visited both Sacred Heart University (CT) and URI on two consecutive weekends. Having received scholarship offers from both institutions she relied on these visits to make her final decision. Folsom commented on her visit to URI, “Sacred Heart was beautiful and the coaches were great, but by the end of dinner I knew I was going to URI.”  She signed her National Letter of Intent on May 3rd.


During her senior indoor season Folsom PR’d (personal record) multiple times, culminating in a KVAC league record tying 11’6” jump at Dartmouth Relays in January. Weather conditions forced the cancelation of the KVAC Championship event and ended athletes’ hopes, including Folsom’s, of entering the record books. With over three weeks off between competitions Folsom had a disappointing finish in state competition. “The [pole] vault requires consistency and routine,” said Cony’s pole vault coach Peter Marsh. “Its hard enough to provide during the winter season as is, the cancelation [of the KVAC championship] made it impossible for me to provide the jumpers.”  Folsom rallied to finish in the top 30 at the New Balance Indoor National Championships in New York City. 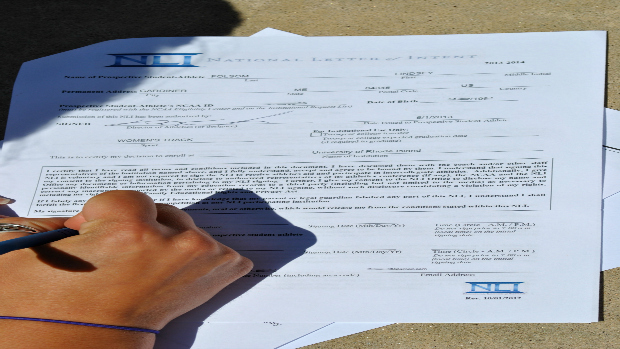 Heading into her final outdoor season Folsom holds 5 state titles (indoor and outdoor) in the pole vault.  She hopes to add a 6th to her impressive resume before heading to URI in the fall.  But most importantly with the school search over and a commitment to URI made, Folsom said, “Its time to have fun [pole vaulting] again.” As league and state championships come up on the horizon her sights are set on challenging the records of former Cony standout vaulter Bethany Dumas.  Folsom’s PR of 11’6” ties Dumas’ KVAC league and Class A State records- and a 12’ vault will set a Maine All-Time Record. “She definitely has it in her. At this point, meet timing is everything,” Marsh said.