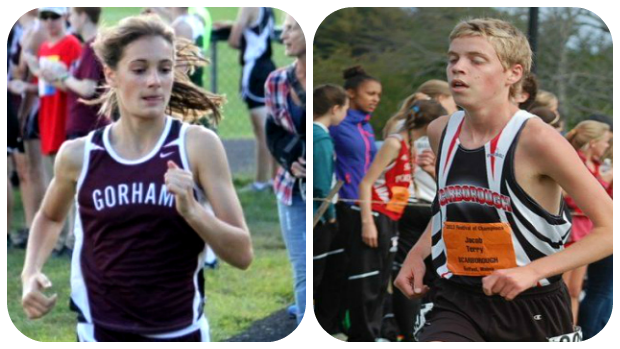 The SMAA Relays marks the official start of a new year in Class A West! After a few preseason invitationals, the league met up for its annual 1.54 mile showdown today at Thornton Academy.  Scarborough’s Jacob Terry and Gorham’s Anna Slager were the top finishers on the day with Terry covering the course in 7:41 and Slager running an impressive 9:10. Slager comes in to the season as one of the big freshman names to watch after posting some incredible performances as a middle schooler for Gorham and Jacob Terry looks to cap of his 4 year campaign at Scarborough with a top finish at the State Meet.

The boys meet was dominated by Scarborough (58:14) who won 6 of the 7 relay legs. Jacob Bloom and Andrew Sholl joined their teammate Terry in the top 10 going 9-10 giving Scarborough a powerful 1-2-3 punch going into the season. This was without one of their top runner Colin Tardiff running, he competed in the JV race after not being able to run last week do to a reaction to medicine. Massabesic 60:58 was the #2 team behind Scarborough led by a 3rd place finsh of Michael Aboud. After losing several key runners from last year, Massabesic has had several young athletes step right up in their place in the early part of the season. Rounding out the top 5 were the teams from Gorham (61:59), Windham (62:00), and Westbrook(62:31) all separated by 32 seconds of combined time! Gorham was helped by the 4-5 finish out of Ben Foster and Jesse Southard, Windham by Ben Breton’s 7th place overall finish, while Westbrook was led by newcomer James Phelps and sophomore Josh Lombardo (14th-15th). This meet showed everyone what kind of team depth Class A West has, and just how difficult it will be to edge into the state meet in 2 months time.


The girls meet was just as close…actually closer. The top 5 teams were separated by 1:53 of total time with Massabesic (49:51), a early season title contender, leading the way. Massabesic put 3 of their 5 girls in the top 15,  to hold off Scarborough (49:56) who looked great only 5 seconds behind. Maquilla Dimanstrantonio stepped up to lead the Mustangs with a 9th place finish while Emily Wasina and Gabby Johnson went 12th and 15th. Laura Volan picked up where she left off from outdoor track with a big 4th place finish and freshman standout Bethany Sholl cracked into the top 15 with a 13th place finish as well. Both performances were key for Scarborough’s success today. South Portland (50:44) put a good day together to finish 3rd led by a huge 2nd place finish by Casey Loring and a strong 10th place finish from Serena McKenzie. Westbrook also put together a strong day finishing 4th while missing runners #3 and #5 and getting great contributions from underclassmen in their place.  Gabbi Pabst finished 7th for the Blazes while Halee Phelps was 11th. Rounding out the top 5 was Gorham who was helped in large part by the dynamic freshman duo of Anna Slager and Bridget Rossignol.  The 1-6 finish by those two was impressive enough, but throw into the mix that they are both freshman and will be around for 4 years and it makes it all the more exciting for Gorham running fans.

Scarborough's Colin Tardiff won the boys JV race in 8:34 while Eliza Bennett of Windham took the girls JV race in 10:07. In the freshman races, Massabesic's Alex Swett took the win with a impressive 8:40 clocking while Lucy Tumazicus of Deering crusied to win with a 10:20


What we learned from today…If you were hoping to learn who the clear cut favorite on either side is, you watched the wrong meet. This fall promises to have many great story lines and a lot of drama by the end. At this point in time, it is anyone’s race!