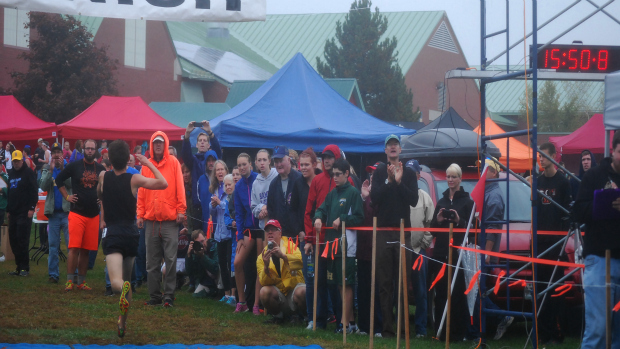 Fast, wet, and muddy make for traditional running conditions for Maine's biggest cross country race, Maine XC Festival of Champions. Even though it wasn't perfect running conditions, there were still fast times posted with the top 35 boy runners under 17 and the top 28 girls running under 20. 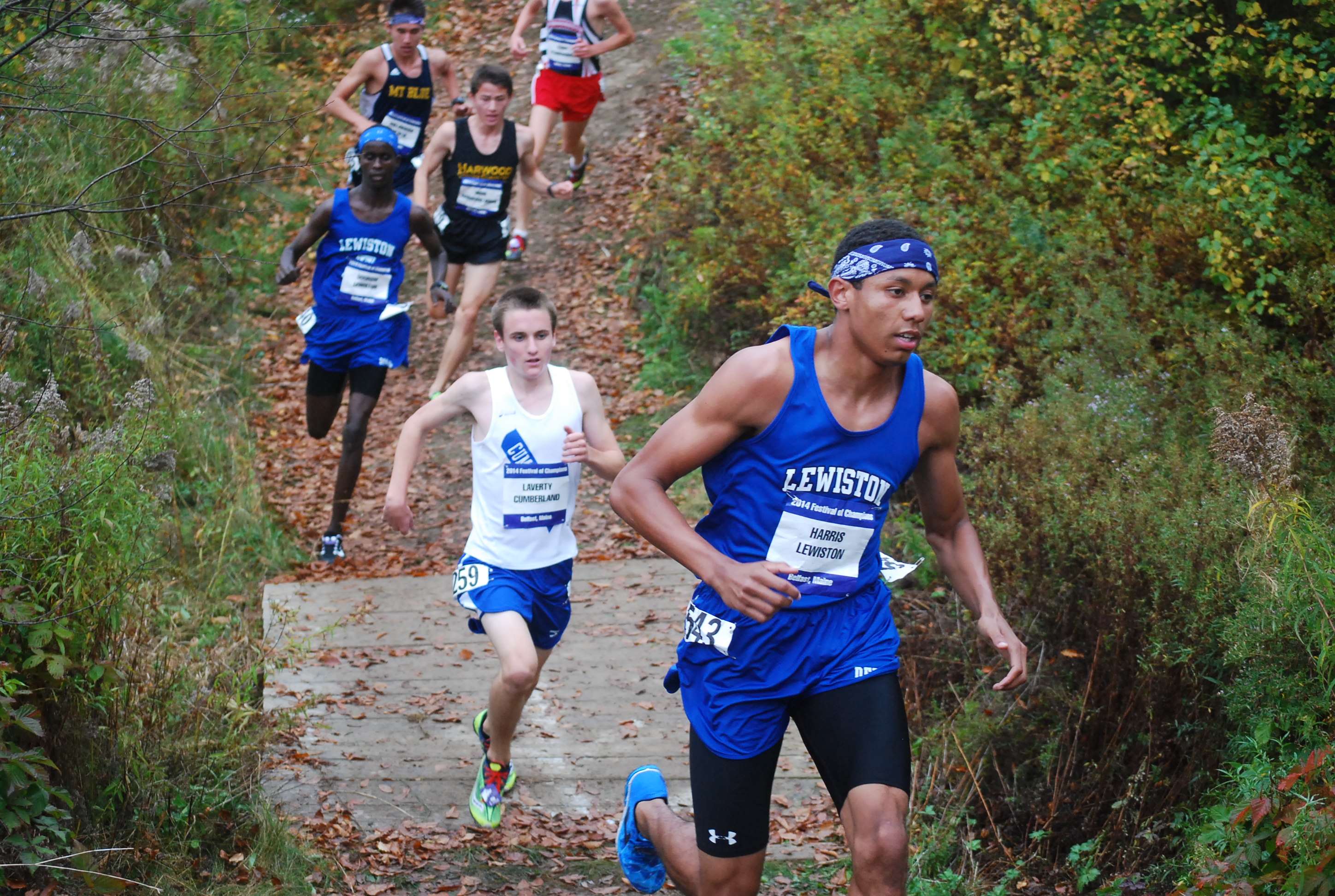 The most exciting and anticipated races of the day were the seeded races with the boys starting off. Like every year, it was a fast start. Leading the way through the first 800 was Aaron Willingham and Dan Lesko of Mt. Blue, Isaiah Harris and Osman Dorrow of Lewiston, Sam Nishi from Harwood Union-VT, and Sean Laverty of Cumberland, RI as they clocked 2:18.

They'd continue the intense pace through the first mile clocking 4:51, as Willingham took a spill and fell back behind the lead pack, Laverty of Cumberland, RI started to push the pace and separate from the pack, but not from Nishi. Nishi would stick with Laverty for a long time. Making his way up to the front pack was senior Jacob Terry of Scarborough, Michael Aboud of Massabesic, and Christopher Walfield of Morse.

Up the super highway into the woods and out for the first time it was Laverty and Nishi leading the way going into the 2 mile. Chasing them down was Terry with Willingham a few strides back with Lesko and Walfield stride for stride, further back was Harris and Dorrow then Aboud in 9th with the duo from Cape Elizabeth Kyle Kennedy and Mitch Morris striding together for 10th. 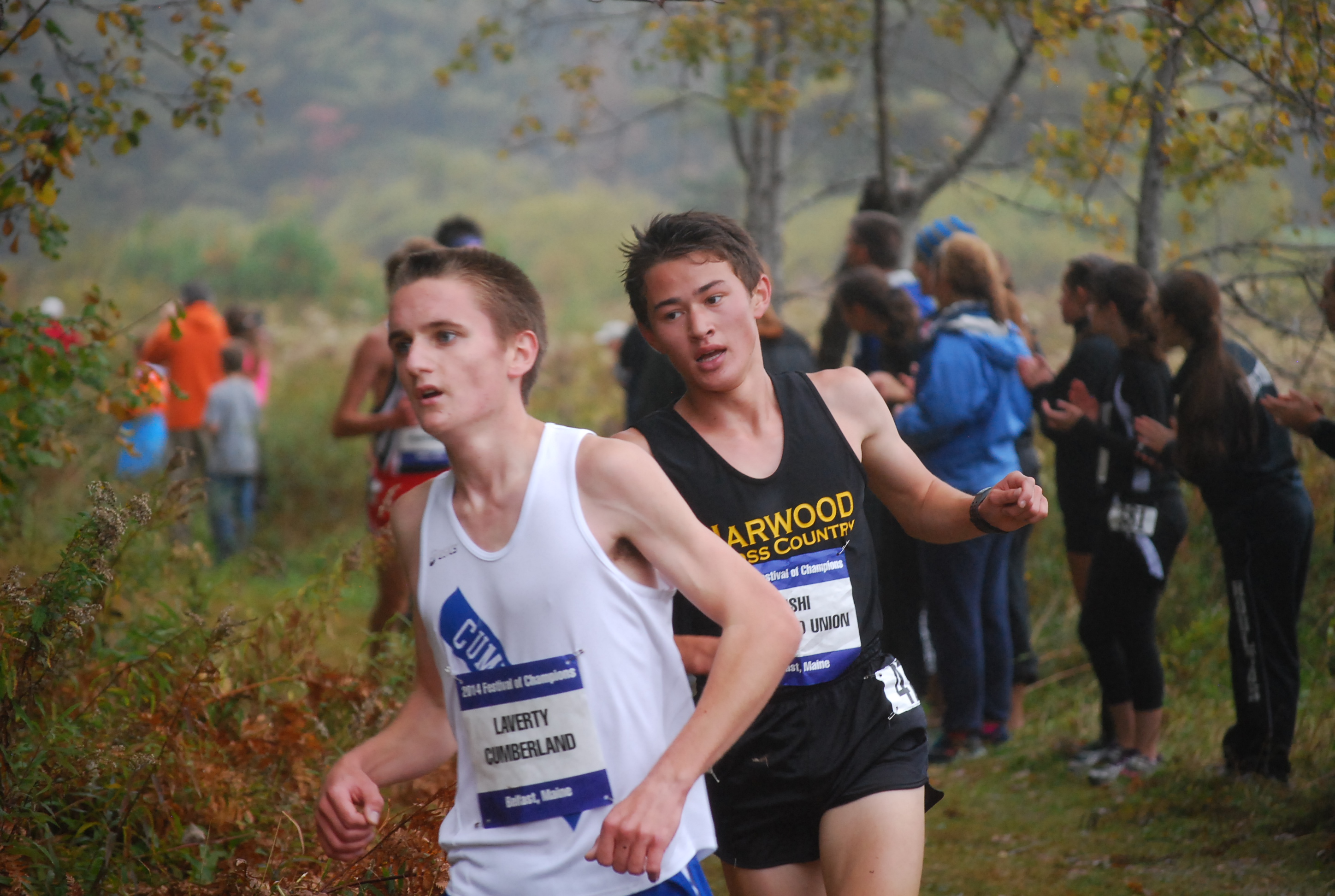 Through the two mile and into the third, it was Laverty leading Nishi by a stride, they hit the roller coaster hills and Nishi over took the lead with 1000 to go. Gaining ground on the two front runners was Terry with Willingham further back. Morris was making his way up chasing Willingham. All within a short span of 5 seconds was 5 runners with Lesko leading Harris, Dorrow, Kennedy, Harrison Knowlton and Walfield.

Coming down to the finishing stretch, Nishi would hold onto his lead over Laverty and win the FOC Championship race in 15:50.48. His winning effort was the 9th fastest time in meet history and was 8 seconds faster than he ran a year ago in perfect conditions. Laverty battled to the end and was rewarded with a fine 15:54.1, the 11th best in meet history. Jacob Terry would hold onto his 3rd place finsh with a 16 flat, a new personal besy by 30 seconds. Terry also lays claim to fastest runner from the State of Maine. Cape's Mitch Morris would run pass Willingham to take 4th in a new personal best 16:06, he was the top Class B runner in the field. Isaiah Harris used his powerful kick to finish 5th as he edged out Willingham 16:12 to 16:13, not far behind was Willingham's teammate, Dan Lesko, clocking a 16:15. Kyle Kennedy would take 8th in a strong 16:17, just enough to hold off a pair of Class B foes, Harrison Knowlton,16:18 & Chris Walfield 16:19.

With a bit of a surprise, Cumberland of Rhode Island would win the team title, behind Laverty's runner-up finish plus two more in the top 25. Cumberland averaged 16:43 with a pack time of 1:29. They didn't coast to an easy victory, the whole way they were pushed by Scarborough and Falmouth. In the end the three teams were separated by just 13 points, 135, 144, 148. Scarborough would take second averaging 16:48 with a tight 1:08 5 man pack time. Falmouth would take home some hardware as well. They were lead by Bryce Murdick and Spencer Brown, as they went 18th and 19th running 16:34.4 and 16:34.65. Rounding out the top 5 was Class teams Hampden and Massabesic, who tied with 239. York was next in 6th with 290 points, the Wildcats were the top Class B team in the meet. Windham & Mt Blue were seperated by 14 points in 7th & 8th. Colonel Gray, PI  & Messalonskee finished in a tie for 9th with 405 points.

The Girls Seeded race was just as exciting as the boys, if not more. Getting out front and running through the first 800 it was defending champion Kialeigh Marston of Bonny Eagle, Tessa Casidy of Brunswick, Anne Guadalupi from Cony, Maddie Doyle of Marshwood, Anne Mckee from Kents Hill and Amy Laverty from Cumberland, RI as they clocked 2:45.

Cranking through the mile Marston would still lead the pack of girls going through at 5:47. with Marston was Cassidy, Guadalupi, Doyle, Mckee, Laverty, and moving there way up was Casey Loring of South Portland, Betsy Dumais of Burrillville, RI, Tia Tardy of Mattanawcook, and Halee Phelps from Westbrook.

Running strong, and running smart, when the pack hit the super highway, Marston, Cassidy and Doyle started to create some seperation and break away from the pack. Also moving up from a far was Hannah Steelman of Orono and Laverty’s teammate, Nichole Barger. In and out of the woods, it was a dual between Cassidy and Doyle as they lead Laverty and Steelman with Guadalupi just a few strides behind. Marston had dropped from the race with a sprained ankle. Holding there places were Dumais, Steelman, McKee, Loring, Barger, and Lily Koffman.

Making their way through the 2nd mile and into the final mile, Cassidy and Doyle were still leading, going stride for stride, but making up ground was Laverty and Steelman with 1000 meters to go. Moving up was Barger and Dumais with Loring not far back. Coming into the final stretch, Cassidy, Doyle, Laverty, and Steelman were all coming in at once and finished 4 seconds apart from each other with Laverty taking the win in a 19:01, coming from afar was Steelman as she worked her way all the way up to 2nd place with a 19:03. Doyle would finish where she started with a strong 3rd place effort, and top Class a finisher and Cassidy was 4th. Moving up strong was Barger as she finished 5th, another out stater, Dumais was next as she ran to a 19:15 to place 6th. Loring would run pass Guadalupi in the home stretch and take 8th with a 19:16, while Guadalupi would run a 19:24. Ellsworth's Haley Lawrence rounded out the top 10 with her 19:26 performance.

Coming into this race, #2 ranked Yarmouth and #3 ranked Cape Elizabeth were expected to duel it out on this fast course. The two matched up once this year where Yarmouth ran all over Cape Elizabeth, and the Capers were looking to bounce backthis week with their new #5 runner. Cape Elizabeth stole the win going 137-166 over Orono. The capers averaged 20:03 with a 58 second pack time. The girls put all 5 of their scoring runners in the top 41, including 2 in the top 16. The young Orono girls placed second, upsetting Yarmouth 166-175, and averaged 20:05. Their #5 runner was far off from the pack, making their split over 2 minutes. The Yarmouth girls ran to a strong third place. as they just edged out Cumberland of Rhode Island. Yarmouth and Cumberland were tied with 5 runners across, it came down to their 6th man and Yarmouth was better than Cumberland. They put their 1-4 runners in a 17 second spread while their #5 runner was still further out. Rounding out the top 5 was Harwood Union of Vermont. Defending champion MDI was 6th with 273, in front of the top Class A team Massabesic who tallied 304, the mustangs were missing their #5 runner. Scarborough was just 5 points back of Massabesic in 7th, then came Falmouth in 9th with 338 points. Rounding out the top ten teams with 428 points was Brunswick. 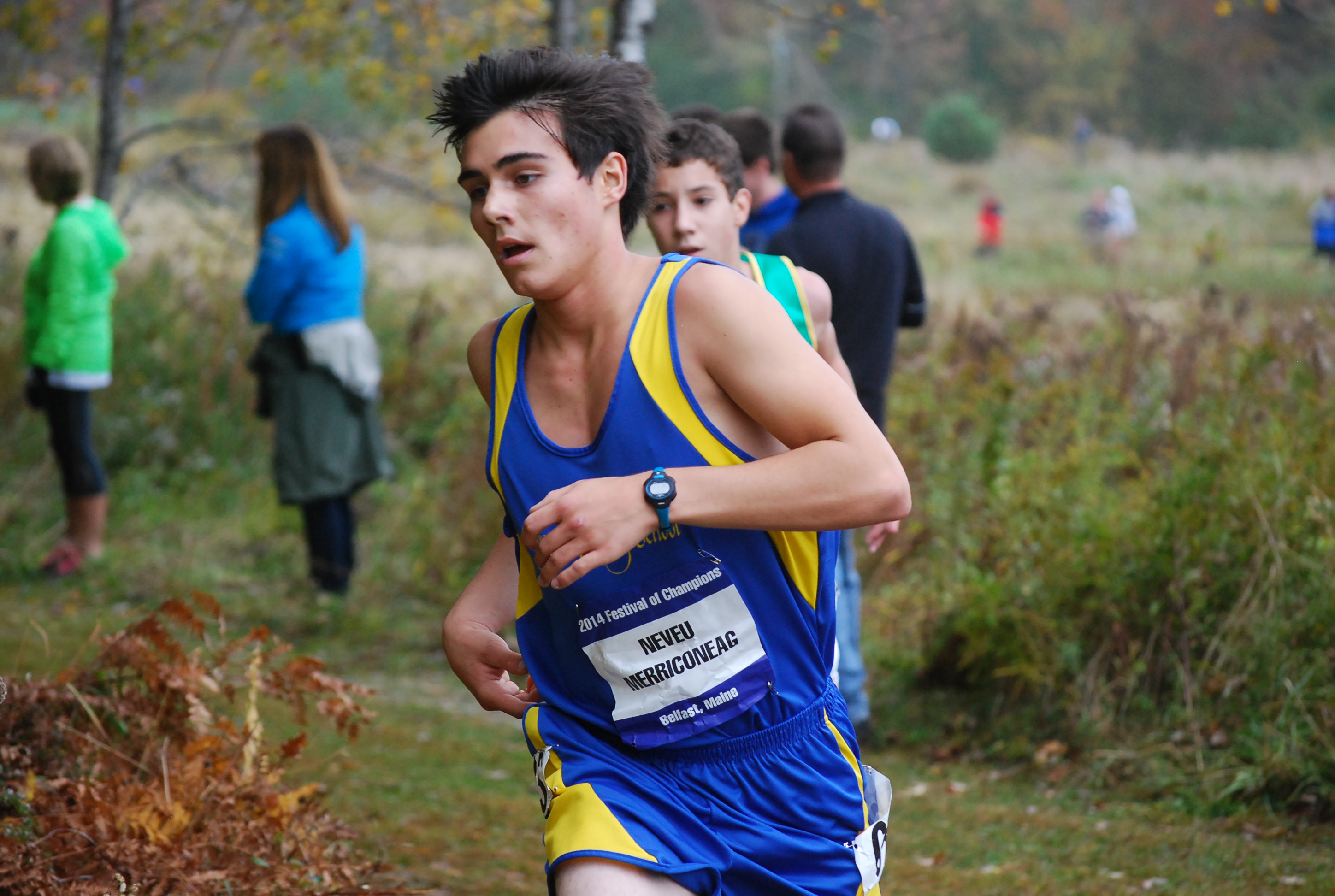 Yarmouth freshman Luke Laverdiere was the heavy favorite to win the boys freshman race at FOC, the up and ocming star came into the meet with a best of 16:33 on the year. He wasted no time in setting the tempo at the front of the pack copvering the first mile in a eye popping 4:59. Laverdiere was well clear of the field after the first mile, and he continued on despite the fast pace. He would reach two miles in 10:40 well on his way to a sub 17 effort. But it wasn't to be, his vocal cord dysfunction kicked in, a breathing in a regular manner became a chore. For those unfamiliar with the vocal cord dysfucntion (VCD) instead of your vocal cords opening when you breathe in, the vocal chords close, so getting air out becomes much harder, often you'll here an athlete weezing when this happens. Luke was a gamer though and continued onto the finish, his time 19:58.99.

Not to take away from the rest of the race, Merriconeag's Nick Neveu had the race of his short career, as he took over the lead, and ran away with the race. Neveu clocked an impressive 17:16.52, his time was good for 48th overall. Coming shortly behind him was Alexander Swett of Massabesic who kicked hard but was ubnable to catch Neveu, but was still rewarded with a lifetime best 17:21.18 (54th overall). Harwood Union's Morgan Baughman rounded out the top 3 in the freshman race with a 17:43.84 performance. 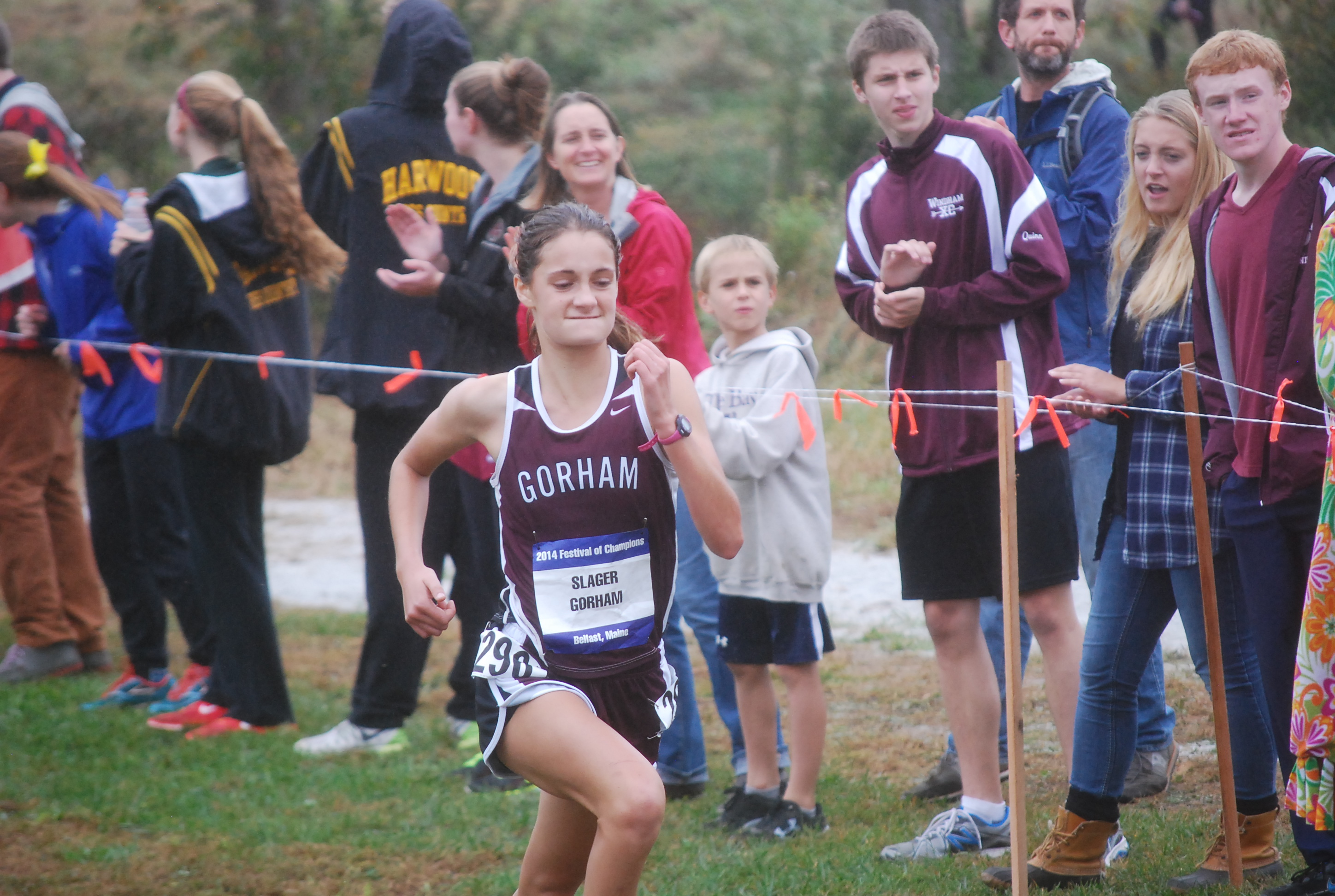 The girls freshman race had several contenders in the mix throughout the race. The early race leader through the mile was Anneka Murin of Yarmouth, she was followed a few strides back by Anna Slager of Gorham, Erin Magill of Harwood Union, VT, Aidan McDonald from JH Gillis & Olivia Skillings of Merriconeag.

A little after halfway, Magill took over the lead opening up a 5 meter gap back to Slager & Murin, while McDonald was a few strides back of them. The race was far from over though with a little over a mile to go. Slager of Gorham who came in with the fastest personal best in the field, 19:33 wasn't above to let this one go without a fight.

As they entered the bowl for the final time Magill continued to lead by 5 seconds, but Slager had her eyes focused ahead, as the hit the dirt trail Slager used the downhill section to turn on the afterburners, once they emerged from the trail, she had seized the lead, and never looked back. Slager would sprint down the home stretch alone corssing the finish line in 19:15.82, good for 7th fastest time on the day. Magill would finish 12 seconds back in 19:27 good for second, then it was Aidan MacDonald who moved up nicely over the second half of the race, her finishing time was 19:46.21. Roght behind MacDonald was Murrin in 19:49.69. rounding out the top 5 was Bethany Sholl of Scarborough with a 20:09 effort

Check back later for the unseeded recap