That's a Wrap From the WMC 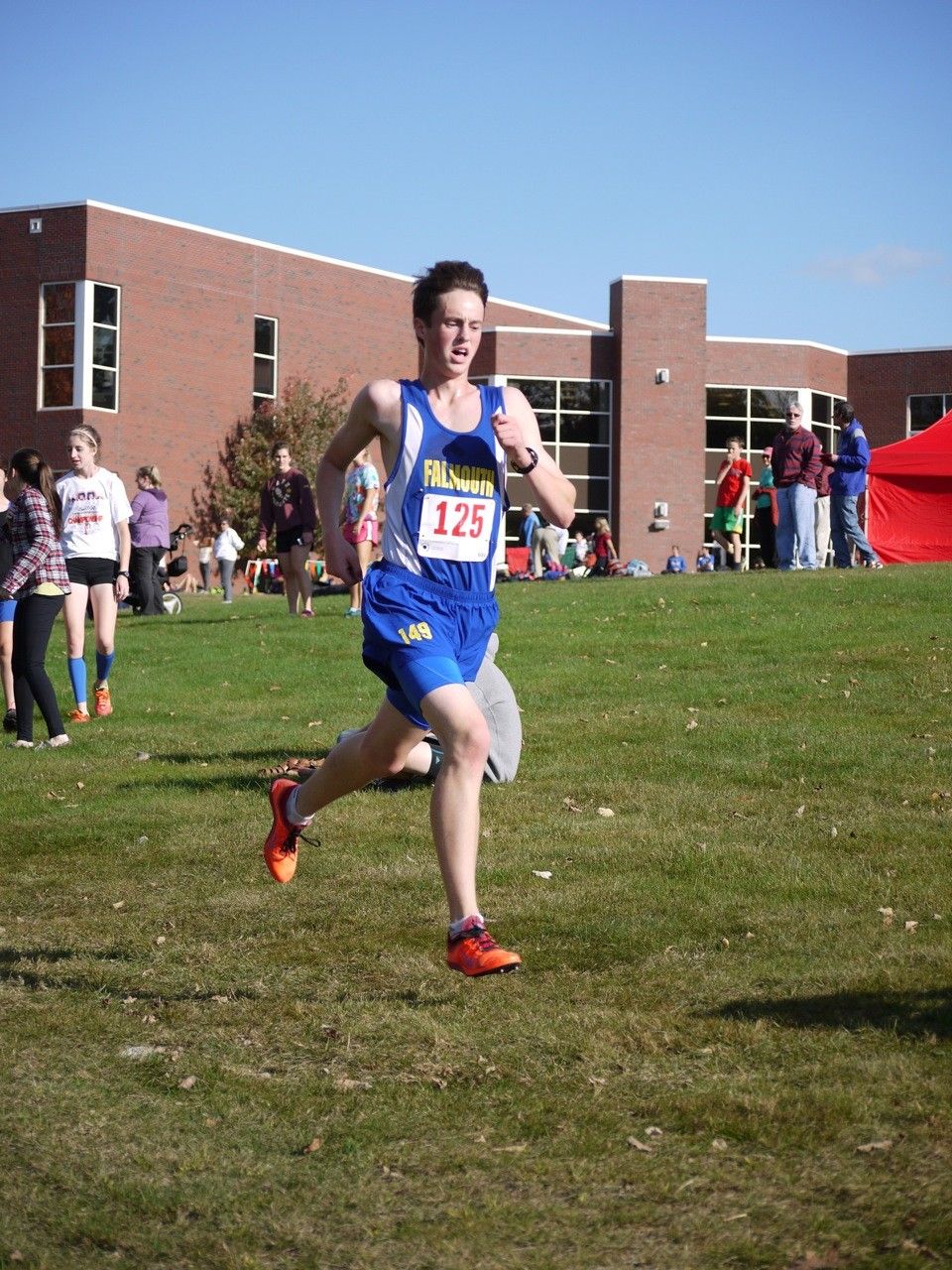 The WMC season is finally over and we're onto Regionals. The final race took place at St. Joes college on Friday and it was 72 degrees with a slightbreeze making it alright conditions to run. But this was better than alright conditions for Falmouth, as they swept all four individual races.

The day started with the Varsity boys toeing the line. The siren went off and the boys took off as they crossed the parking lot and down the trail. 400 meters into the race, no one had taken charge of the race so senior Bryce Murdick volunteered to do so. Murdick took off from the pack and no one saw him again. Murdick went through the mile at 5:12 as he was by himself. The first chase pack went through at 5:20 with Cape's Mitch Morris leading Kyle Kennedy and Luke Laverdiere, the second group followed with Ryan Morrison of Greely leading Patrick Carty of Fryeburg and Spencer Brown of Falmouth through the mile at 5:24.

Murdick would hold his lead through the second mile and would increase it even more! Murdick clocked a 10:30 through two mile and into the third. Morris and Laverdiere would pull away from Kennedy as they went through the two at 10:48. Kennedy a second behind the two as the chasers Patrick Carty and Spencer Brown chased them. Moving up into that mix was Matt Malcom of NYA, Scott Lambert of Falmouth, and Chandler Vincent of Freeport. 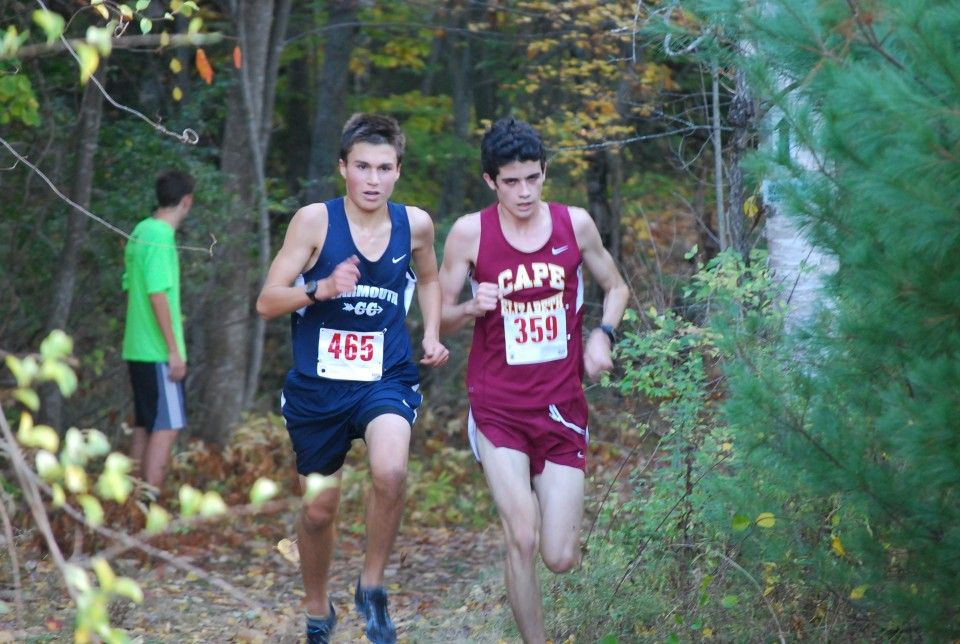 Coming up the hill and into the finish, Murdick would hold onto his lead and pull the upset over xc watchlist #2 Mitch Morris and win by 10 second in a 16:49 manner. Mitch would cut the gap down on Murdick but not enough, he was able to pull away from Laverdiere though finihsing in 16:59. Laverdiere finished well though in 3rd with a 17:10, an impressive time for a freshman. Spencer Brown would work his up to finish 4th with a 17:13. Kennedy would drop back to 5th running a 17:17. Patrick Carty would hold onto his 6th place from the two mile and would finish that way in front of Vincent. Rounding out the top 10 would be Morrison, Lambert and Tucker Pierce of Merriconeag, as they all finished with in 4 seconds of each other. In the Boys JV race, Ben Wyman of Falmouth would win in a 18:23 fashion, making him the 28th fastest on the day.

Falmouth would dominate the whole meet and win. They won the division 1 title of the WMC as they scored 29 points over second place York, who had 60. Falmouth averaged 17:26 with a :58 second split. Next week will be all new competitors for the Yatchsman as they go into the Class A regionals being just behind #1 Scarborough. York averaged 17:58 with a tight split of :34 seconds and rounding out the top 3 would Greely, who finished close to York with 62 points. Greely averaged an 18:04 with a 1:01 split. Being that close to York, Greely will go into Regionals with high hopes and expectations as they run their home course.

In Division 2 Fryeburg would edge out Merriconeag 42-47. Averaged 18:33 with a 2:02 split as Merriconeag went 18:36 with a 2:13 split. Merriconeag will go into this weekend as a favorite to win the Class C Western Regional title next week. Rounding out the top 3 was 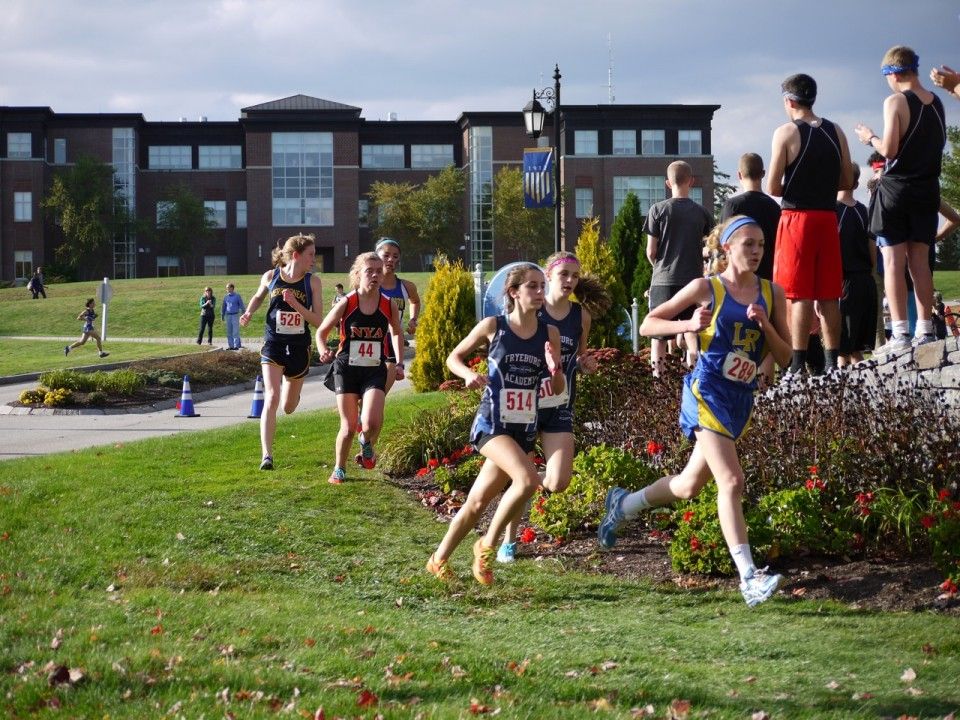 On the girls side of the race, there wasn't a front runner but a pack through the first mile and a half. Through the first mile it was Audrey Blais of Lake Region running with Emily Carty and her teammate Anna Lastra of Fryeburg. Three strides behind them was Hannah Austin of NYA, Olivia Skillings of Merriconeag, and Mira Wyman of Falmouth as they all went through the mile at 6:25. Trailing the pack was the pack of Cape girls, With Rhoen Fiutak leading Liv Palma and Sam Feenstra, with Kathryn Miller of York just behind Feenstra.

Through the woods and back into the starting area, they'd run through the two mile, the pack would grow with new runners and as some dropped off. Mira Wyman and Hannah Austin would lead the pack as they went though the two at 13:11. The pack consisted of Grace Cowles of Yarmouth, Skillings, Fiutak, Palma, Feenstra, Carty, Miller, and Caitlin Teare of Yarmouth.

In and out of the woods for the final time, it was Wyman running by herself as she won in a 20:17. This was Wyman’s third win of the season and a big win it was. Passing Austin in the woods, Cowles would take second place with a 20:26 as Austin was 3rd in 20:33. Coming in 4th was Skillings, clocking a 20:43. Feenstra had a strong race as she 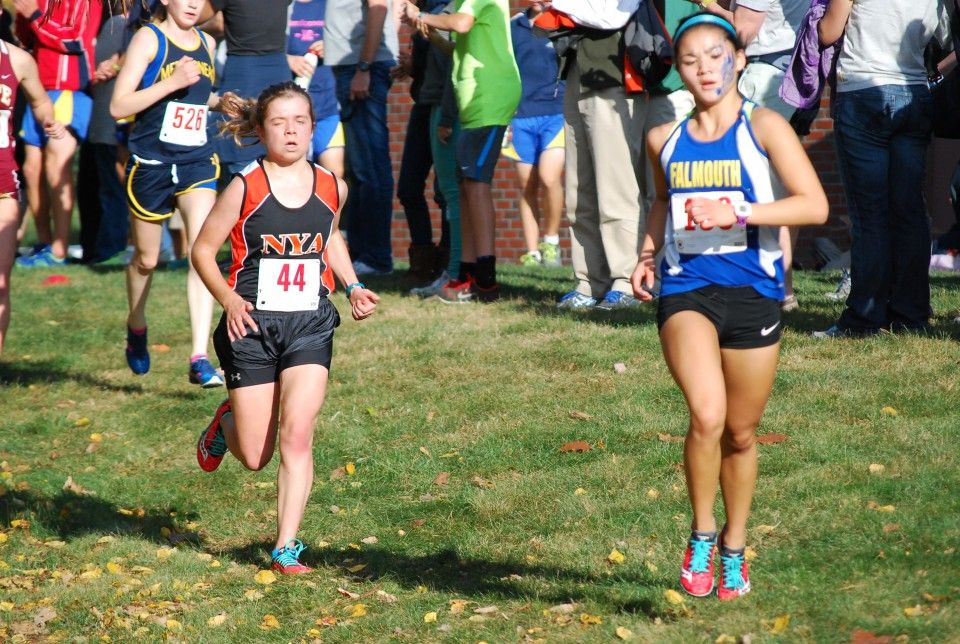 finished ahead of her teammates Fiutak and Palma with a 21:01. Moving up well and running to a 6th place was Abigail Hamilton of Yarmouth. Palma and Fiutak finished 7th and 8th respectively. Anneka Murrin also of Yarmouth would move up well too as she placed 9th in front of Emily Cart, who rounded

out the top 10. Vishva Nalamalapu won the girls JV race in a 22:16 making her the 16th fastest girl on the day.

In Division 2, Yarmouth would dominate as they scored 28 points over second place Waynflete, who only scored 62. Yarmouth would average 21:18 with a 1:51 split. Waynflete would pull an upset over Merriconeag, as they averaged 22:20 and a 2:02 split. While was 3rd Merriconeag and averaged 22:40 with a large split of 5:17