In spite of the previous week’s near-consistent rainfall, a beautiful day shone through at Belfast’s XC course, home of this years Eastern Maine Regional Championship meet. Though the course was wet and muddy, the competitors were not deterred, turning in many impressive performances. With temperatures hitting low 60’s with plenty of sunshine, it was a great day for the races and spectators alike. 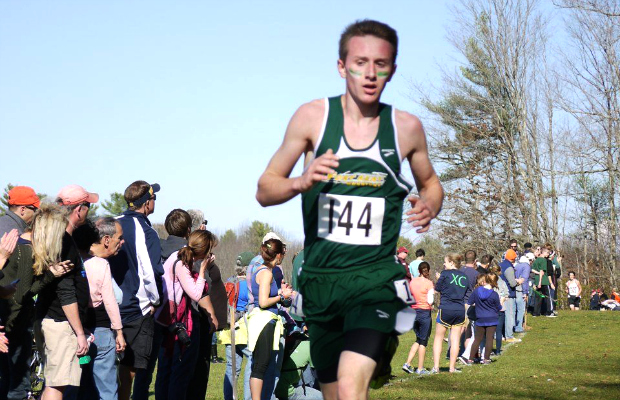 The Class C boys were first up and Matt Toussaint, a senior from Fort Kent High School, turned in a very underrated sub-17 minute performance. Using a strong final 1k, Toussaint’s time of 16:50.92 helped outdistance himself from 2nd place finisher sophomore John Hassett (17:00.66) of George Stevens High School to take home the Class C title. Junior Tristian Butterfield (18:00.73) just missed breaking the 18-minute barrier, but had plenty of room to take 3rd before Washburn junior and 4th place finisher Derek Baker (18:07.20) crossed the finish line. Matt Keresey (18:13.56) of Orono, who is only a freshman, rounded out the top 5 in the race.

In the team standings, the Orono High School boys stood at the top, getting 4 of their top 5 finishers inside of the top 10. Led by Butterfield’s 3rd place finish and Keresey’s 5th place performance, Orono got help from two more underclassmen – sophomore Lowell Ruck (18:36.05) and freshman Jonathan Spencer (18:40.28). George Stevens High School put up a valiant fight, as they finished 2nd by 13 points. Despite a great performance by Hassett and 9th place finisher Devin Valle (18:25.89), George Stevens High was not quite able to get the job done. Fort Kent High School was 3rd, helped greatly by Toussaint’s victory. 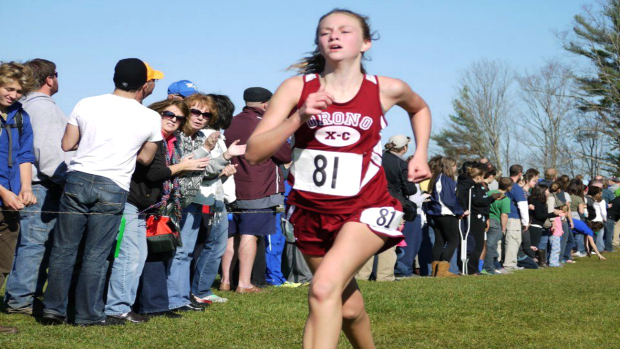 Sophomore Hannah Steelman of Orono High School got the sub-20 minute performances started early on the girls side in the Class C regional championship. Steelman seems to thrive on the Belfast course, turning in the day’s overall best time for the girls with a 19:23.20. She led start to finish, beating Class C runner-up sophomore Tia Tardy (20:08.29) of Mattanawcook High School by 45 seconds. In a race dominated by underclassmen talent, sophomore Kassidy Dill (20:22.84) of Orono High School and freshman Eliza Broughton (20:49.94) of George Stevens High School finished 3rd and 4th respectively. Junior Olivia Fandel (20:55.79) of Orono High School broke up the trend, finishing 5th. On her heels was teammate and freshman Liza Gallandt (20:56.05). 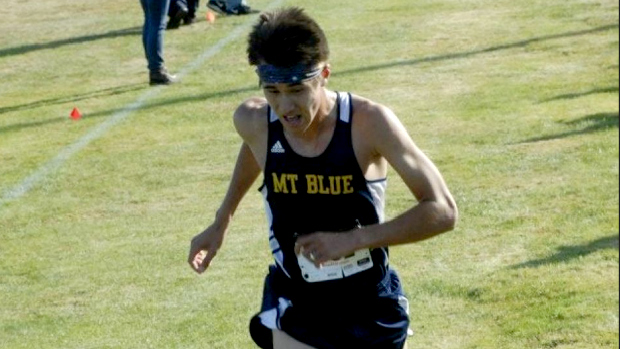 Next up was the race of the day – the Class A regional championship. With 6 finishers under the 17-minute barrier, this was by far the deepest field of the afternoon. It was up for grabs early, as eventual 4th place finisher junior Osman Doorow (16:43.61) found himself in the lead as far as a mile in. However, by the homestretch, it came down to whether senior Aaron Willingham of Mt. Blue High School had enough in him to hold off a hard charging Isaiah Harris of Lewiston High School. It turned out that he did, as Willingham took home 1st place with the day’s best time of 16:24.77 to Harris’ 16:26.52. Willingham’s wingman senior Dan Lesko (16:32.83) was not far behind, taking 3rd place. Senior Caleb Lord (16:48.52) of Hampden Academy came in 5th behind Doorow and was followed by teammate sophomore Paul Casavant (16:53.24). 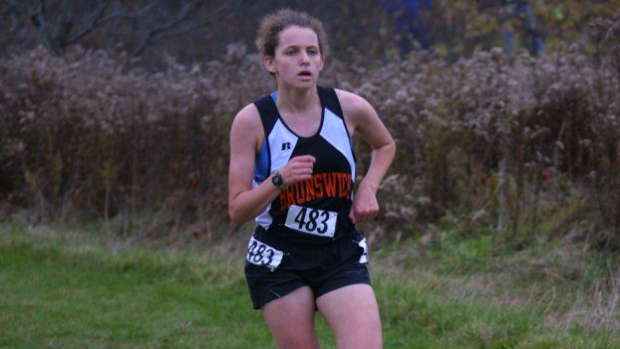 Similar to the boys Class A race, the girls Class A race fielded the most talent, with 3 finishers breaking the 20-minute barrier. Junior Tessa Cassidy of Brunswick got the job done in impressive fashion, turning in a very respectable time of 19:29.93. She took the title by 11 seconds over runner-up Anne Guadalupi (19:40.91) of Cony High School. Elizabeth Labun (19:51.94) of Hampden Academy was the final runner in the race to break 20 minutes, taking 3rd place. Katherine Leckbee (20:20.41) only a freshman at Mt. Ararat High School was 4th and junior Tiffany Tanner (20:27.00) of Brunswick High School rounded out the top 5.

Despite Brunswick High School fielding a better top 3 than Hampden Academy’s top 3, Hampden Academy got the team victory to complete the Class A Hampden sweep thanks to a strong 4th and 5th tandem of Bryanna Parker (21:50.59) and Erin Murphy (22:20.56). Brunswick was runner-up behind Cassidy’s victory and Tanner’s 5th place finish. 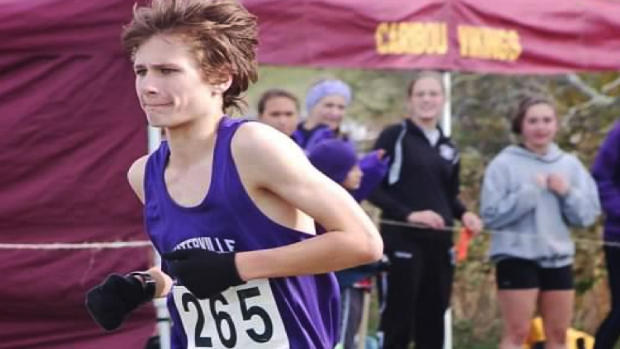 If you thought the Class A team standings were close, you wouldn’t believe this one; Caribou High School squeezed out a very narrow 3 point win over MDI. Despite not having a finisher in the single digits, Caribou High School used a very strong 3-5 runner pack to pull off the win. They were led by Elijah Verhoff (18:18.00) and his 10th place finish, followed by Chathu Karunasiri (18:23.26). The real heroes for Caribou may not have stood out as much, but were equally vital, taking the 17th, 18th and 19th places. Those finishes belonged to Lukas Lagasse (18:39.81), Daniel Randolph (18:41.69) and Mitchell St. Peter (18:43.44). MDI nearly got the win behind that tandem of Magnani and Harris, even getting a 13th place finish from Peter Philbrook (18:26.34), but they fell just short. 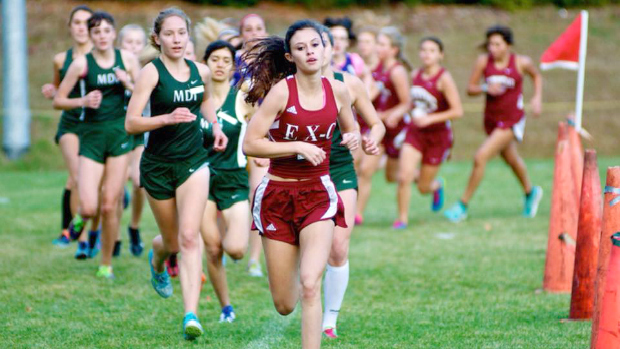 The final race of the day was the girls’ Class B regional championship race. Haley Lawrence, a senior from Ellsworth High School, did not disappoint, turning in the final sub 20-minute performance of the day with a 19:51.28. She distanced herself from the field on the rolling hills, winning by 15 seconds over runner-up Caroline Driscoll (20:06.33) of MDI, who beat Lawerence just a week ago at the PVC championship. Lauren Brown (20:14.76) was 3rd, who had room to spare before 4th place Amanda Boyd (20:23.58) and 5th place Lydia Dacorte (20:27.74) crossed the finish line.

Had the MDI boys pulled off the close team win, MDI would have enjoyed a Class B sweep, as the girls team took the title by 10 points over Caribou High School. Led by Driscoll’s runner-up performance and Dacorte’s 5th place performance, MDI got more help from a deep squad, with Waylon Henggeler (20:41.50) and freshman India Janes (21:45.25) finishing 6th and 11th respectively. Robyn Larrabee (21:07.93) led the way for Caribou finishing 7th.

Hopefully we’ll get an equally beautiful day at the state meet a week from today, as the Eastern and Western Maine regions are set to clash. It should make for some interesting finishes, with many runners performing at top form right at the perfect time in the season.