The best in New England converged on Wickham Park in Manchester, CT on Saturday morning for the 80th New England Cross-Country Championship meet.

The New England Championship meet is often the culmuniation of many month of hard training for all those toeing the line. With all the New England states competing with the exception of Massachusetts, you had the top 6 teams from each state along with some top rated individuals.

As expected Darien, CT senior Alex Ostberg the course record holder easily won the race as the nationally ranked runner would finish 32 seconds ahead of the field in a fine 15:07 effort.

Class A state champion Aaron Willingham of Mt Blue & Class A runner-up Bryce Murdick got off to a strong start as they navigate there way through an opening in the fence, and headed out into beautiful park side.

Through the mile in 5:09 the duo was running side by side as they placed themselves within the top 15. Working together they were able to keep each other motivated throughout the tough 5k layout. As they hit the hill known as the “Green Monster” just about the 3k mark of the race they continued to hold their places in the top 25 as they headed up the hill and onto the fast closing mile.

In the end it was Murdick who would close out the race the fastest for the Maine runners as the senior powered his way to up the finishing hill to the finish line. Crossing the line in a subperb 16:15 would net him a 19th place finish. Finishing just one second behind was Willingham in 21st securing his first All-New England honors.

Murdick said he will continue his season as he plans on running at the Footlocker Northeast Regional in famed Van Cortlandt Park in New York in three weeks.

“Fantastic, I’ve never run out of state before” Willingham said of finishing in the top 25, he too will continue his xc season as he plans to run in the Nike XC Regional at Bowdoin Park in New York after Thanksgiving.

Iid Sheikh-Yusuf of Deering continued his strong post season push as he placed 37th averaging 5:20 per mile for his 16:32 effort. Right behind him was Class B state champion Mitch Morris of Cape Elizabeth who got off to a slow start in the first mile, and ran out of race. Morris was timed in 16:33 good for 38th.

Nationally ranked LaSalle Academy of Rhode Island was the boys team champion with 67 points, amazingly 77 points up on runner-up Danbury. They had all 5 scoring runners in the top 32.

Falmouth who was the Class A runner-up was the top Maine team as the Yachtsmen finished 13th overall tallying 385 points. Masaabesic who was third in state meet in Class A was one spot behind in 14th with 400 points. Scarborough placed 16th with 433 points. Class B state champion Freeport finished 26th, Windham was next in 27th, and Class C champion Merriconeag rounded out the field in 30th. 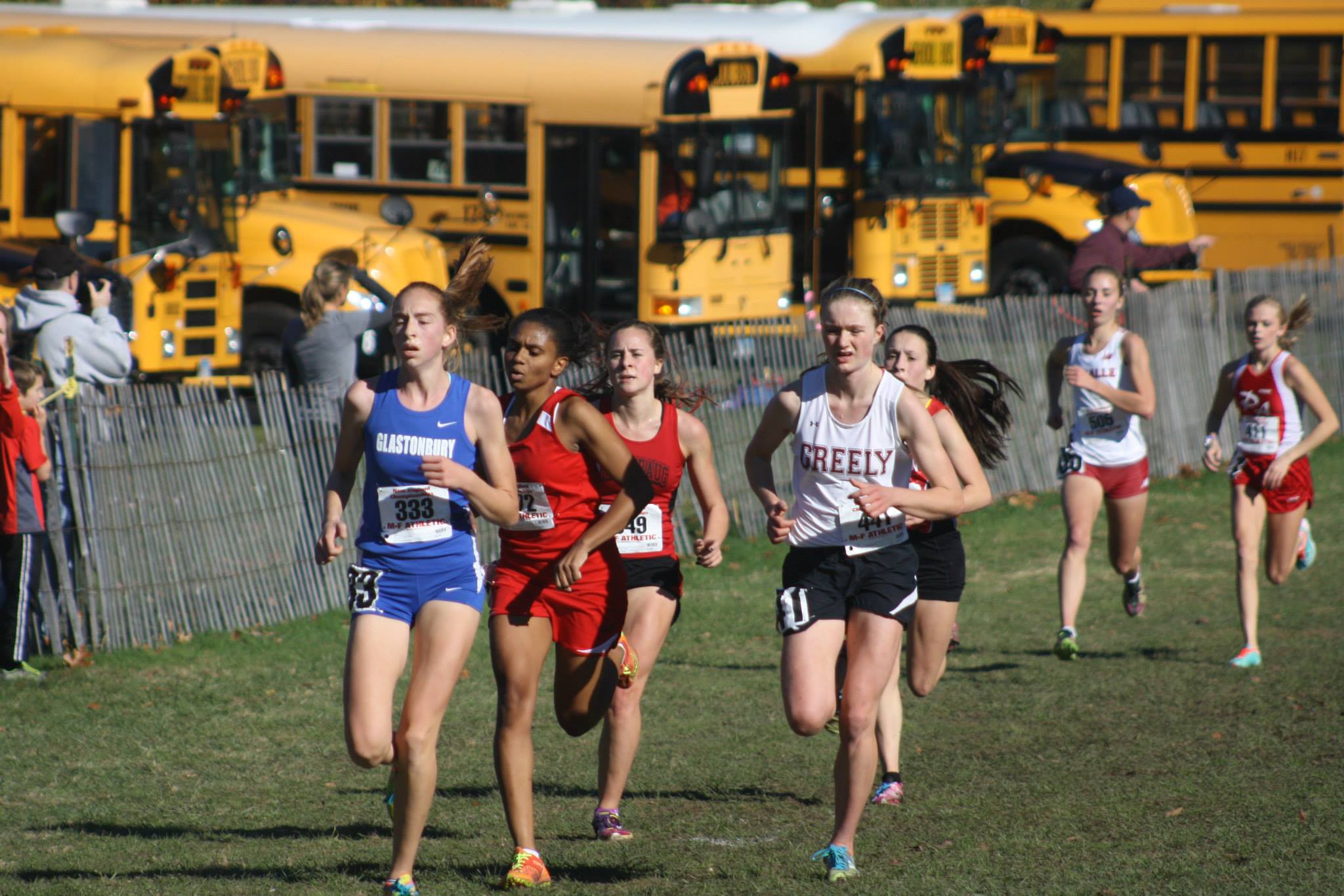 With the sun shining high above the girls race got underway at 12:30pm as 255 of the best female cross-country runners in New England sprinted off the line.

Staples, CT junior Hannah Debalsi the defending champion, and one of the best female distance runner in the country established herself at the front and never looked back. Debalsi would cross the finish line in 17:58, good for a 5:48 per mile average and more importantly a 25 second victory.

Class A runner-up Maddy Doyle of Marshwood was next across as the senior nabbed a 48th place performance with her 19:46. Freshman Anneka Murrin of Yarmouth was the sixth best freshman in the field today, and finished as the 4th best Maine runner with her 62nd place finish. Behind her were a pair of freshman, Izzy Evans of Greely (70th) & Anna Slager of Gorham (71st). Maine should be well represented by this trio in the future.

Teamwise it was LaSalle Academy, RI defending their title with a score of 80 as they held off a strong challenge from New Hampshire’s best Coe-Brown Academy who was 13 points back.

Leading the way for Maine teams was Class B runner-up Yarmouth who was 16th with 412 points, next was Class B champions Greely in 20th with 472. Cape Elizabeth was next in 24th, then Class C champion Orono in 25th. Massabesic the Class A runner-up was 28th just in front of Class A champion Scarborough.