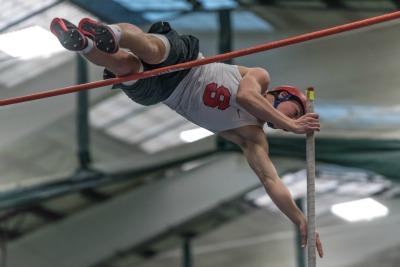 Sanford junior Peter Hegarty competed indoor for the first time in his career this winter, the move paid off as he took home the state title in the pole vault with a 13-6 clearance. We caught up with Peter to ask a few questions about his preparation before the meet, his mindset on meet day, what it meant to win his first individual state championship.

Leading up to the state meet, I practiced a couple times at 6am before school and made sure I got to bed early.

Over my time of being an athlete I've discovered I almost thrive and compete better with pressure so I just competed the best I could like any other meet.

For my last attempt at 13-0 I switched to a different pole in hopes of a more successful vault which luckily paid off, but before I jumped I just knew I had to give this attempt everything I could if I wanted a chance at 1st. Before attempting 13-6 I talked with my coach briefly and he just told me to do the same thing as my last attempt at 13-0 but try to get more vertical and swing my hips all the way into the pole. When I cleared 13-6 on my first attempt I was instantly flooded with excitement knowing that it could possibly be the winning vault but tried to remain composed and in the right state of mind if in fact the competition did go on.

Coming into the season my goal was to break Sanford's long standing pole vault record of 13-6 and I did achieve this goal and set the new school record at 13-7.

How do you think winning an individual state title will effect you heading into outdoors?

I think winning the individual state title has definitely boosted my confidence for going into the outdoor season and I look forward to getting back at it this spring!