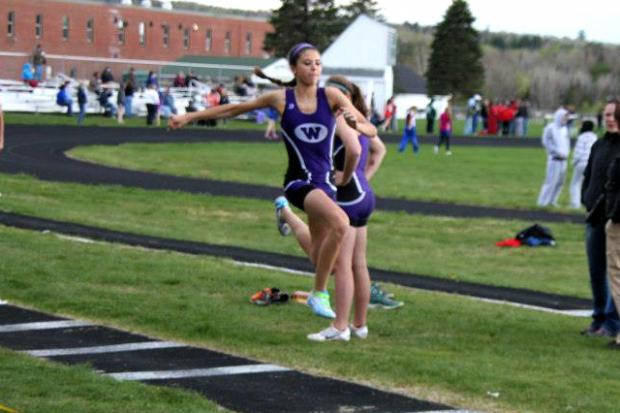 Waterville senior Kellie Bolduc won here third straight Class B triple jump title with a personal best 36-6 1/2 mark. Bolduc also was the runner-up in the high jump and 3rd in the hurdles helping her team to a 5th consecutive state title. We caught up with Kellie to ask her about her preparation before the meet, her mindset on race day, and about winning her third triple jump in a row.

work hard in practice and give 100 percent everyday. I had to prepare myself physically, mentally and know who my opponents were going into the meet.

Being a senior I have experienced many state meets and although it can be stressful I know how to focus and get the job done.

You won the triple jump state indoor title for the third year in a row, and did so with a strong first jump in the prelims, how did that first jump feel and did you think the distance would hold up throughout the competition?

I was relieved and excited that I got a good distance on my first jump. After prelims my goal was to stop worrying about the competition, because I was already in the lead, and to set a personal record.

My goals were to set personal records, and in doing so, score well in the state meet to help my team win another state championship.

What was it like transitioning to a new coach in your senior year?

It was different with a new coach because I have had Wilson as a coach my whole high school career. This experience will make my transition into college easier because I will have to adapt to new coaching as I did this year. As a senior captain I had to help the team and the coach communicate and work together.