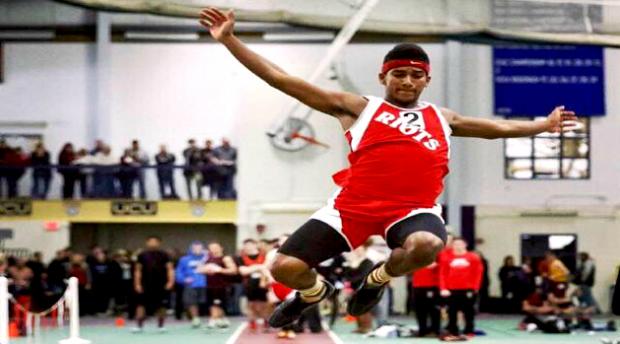 Senior Michael Cuesta won his first long jump state title and added his second straight triple jump crown at the Class A state meet. We caught up with Michael to ask a few questions about his preparation before the meet, his mindset on meet day, and how he dealt with being down to his final attempt in the triple jump trials without a mark.

Leading up to the state meet it was mostly mental preparation, I knew I was capable of doing big things it was just a matter of getting my form to come together again. This became a bit more difficult when I sprained my ankle the week of Southwesterns but I pushed through it and stayed motivated and didn't let it affect me too much.

State meets always have an odd feeling, you're no longer competing with "average" athletes expecting to see "average" performances. I usually keep things to myself and stay quiet at meets so at the state meet I really just went off on my own and concentrated. After seeing my teammate foul out on his throws there was slightly more pressure put on me as we were already down 10 points at the beginning of the meet, but I handled it well as I scored 20.25 of our 21 points that day.

After you won the long jump did you feel more relaxed for the Triple jump? When you were down to your final attempt in the trials in the TJ with two fouls what was going through your mind on the runway? What was your feeling right after you got a fair mark?

I was slightly relieved after winning long jump. I was worried joy was going to pop a huge jump and take the win because I was struggling to get on the board. But I finally did and came out on top which I am very proud of. Having two fouls in any event is tough, especially when those two fouls could be some of your biggest attempts. But my coach always tells me I am a very clutch jumper so I focused myself, as well as back up 2 feet from my mark(just to make sure I wasn't anywhere near the board) and took my jump. It was still 44+ effort no where near the board which even surprised me

My goals for this season where very specific, Nationals has been my goal since last indoor season. I missed qualifying by 2 inches so I was hungry for it in outdoor. This season the bumped it up to 45-9 in triple which I wasn't too concerned about. At the Colby meet I had a jump of around 46-2 but since it was a foul nothing came of it. I'll be up at Umaine this Sunday competing at a USATF meet for one last chance at 22 and 46 on my indoor season.

You've won the triple jump state title two years in a row indoors, what are your goals for the outdoor season?

I am very proud I can say I successfully defended my indoor tj title. Now for outdoor I would like to hopefully take the LJ tittle as well as the triple jump. Last outdoor season was easily my toughest season, coming up .25" short at the state meet to take 2nd was a tough thing to get over. But I know I have what it takes to blow everyone away with what I can do. There's no doubt in my mind I haven't gotten anywhere near my best jumps