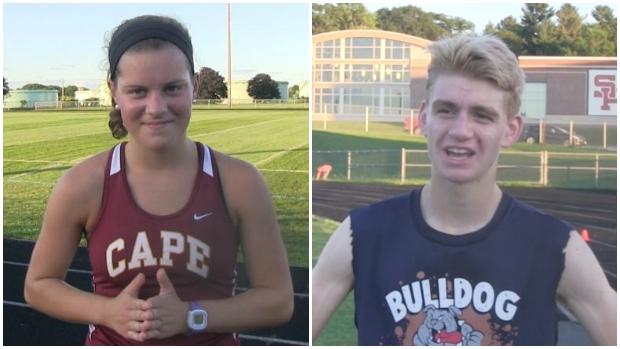 Cape Elizabeth's Sam Feenstra prevailed in the Paul Brogan Invitational on Tuesday evening as the senior went with the fast pace early, and pulled away from South Portland's Serena McKenzie in the latter stages of the race to cross the line first in a time of 18:27. Feenstra's winning margin over the 2.69 mile course was 10 seconds. McKenzie racing for the first time this fall was easily second in 18:37, she was followed by three more Capers with Emma Shedd finishing 3rd (18:53), Liv Palma a stride back in 4th (18:54) & freshman Alicia Lawrence rounding out the top 5 with 19:28 effort. Cape Elizabeth was the top team behind 4 in the top 5 to score 20

On the boys side Portland's Brad Ravenelle was content with the slow early pace before deciding to take control off the race halfway when it was apparent no one was going to push the pace. Ravenelle a senior cruised to a 22 second win over South Portland junior Xander Keiter, his winning time was 15:47, Keiter pulled away from teammate Gavin Damian-Loring to finish 2nd in 16:09, with Damian-Loring clocking 16:31 for 3rd. Freshman Joe Harrington of Portland had a strong showing in his first high school race as he placed fourth in 16:39. Scout Tucker of Cheverus rounded out the top 5 (17:01). In the team scoring host South Portland took it 32-39 over Portland