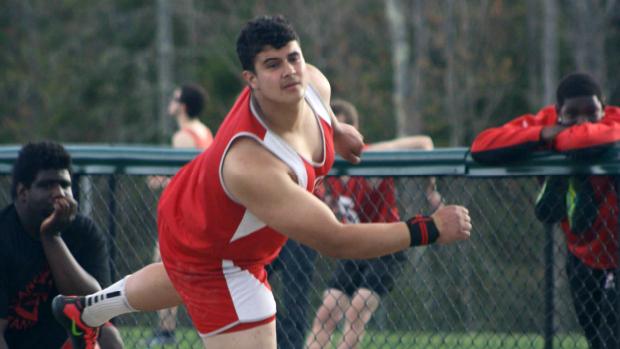 Daniel Guiliani is dedicated. That's how the South Portland High School senior described himself. Guiliani prepares for meets by doing plyometrics, cleans, squats, and deadlifts. That dedication has paid dividends throughout his career and was on display at the SMAA regular season meet #2 Wednesday. The Iowa State signee launched the shot put 67'11.5", a new state meet and New England record. He says he the throw on his last attempt and just brought it all together despite the freezing temperatures and rain.

"My first throw was 64'3", my second was 67'4", and my third was 60'6", so sort of all over the place. I thought it was a descent throw when I let it go but I didn't know it'd be that far. The cold doesn't really bother me, and it just doesn't get to me. I don't do anything different I just do my thing. It was a sloppy day, but everything clicked on that last throw."

Guiliani's throw was three inches farther than his state record toss earlier in the year and three quarters of an inch better than Massachusetts's Jeff Chakouian who owned the New England record of 67'10.75" from back in 2000. The Maine standout says the records mean a lot, but with a month to go until the state meet, he isn't done yet.

"It really means a lot, just all the hard work paid off. My goal is to break 70', maybe even go farther. I have some technique stuff to work on and I think I can do so this season."