The SMAA Conference Championship this Saturday is bound to be one full of intense competition and elite performances. 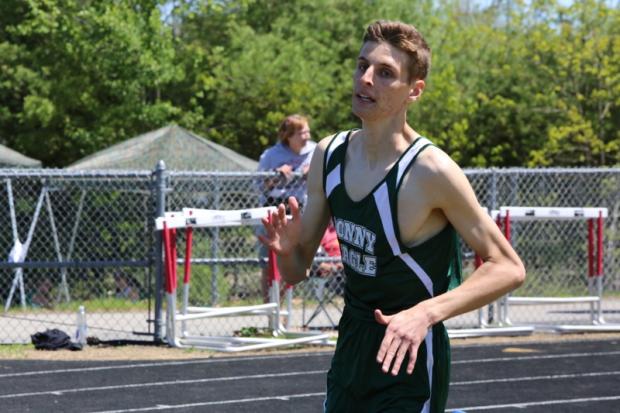 Expect a possible 4x800 showdown this Saturday, with Bonny Eagle, Massabesic and Scarborough all being seeded within two seconds of one another. It will be interesting to see if the teams give it everything they've got in order to get into the states mindset, or try to save some gas for the following weekend. Regardless, expect a strong kick from Ben Steeves against any anchor leg who tries to challenge him. Massabesic is coming into this race having just broken their 4x800 school record, and that momentum may just carry them to do so again. Don't count Scarborough out though - if the first three runners can gain some distance, Brian Farino has the wheels to possibly hold off Steeves' 1:55 speed. 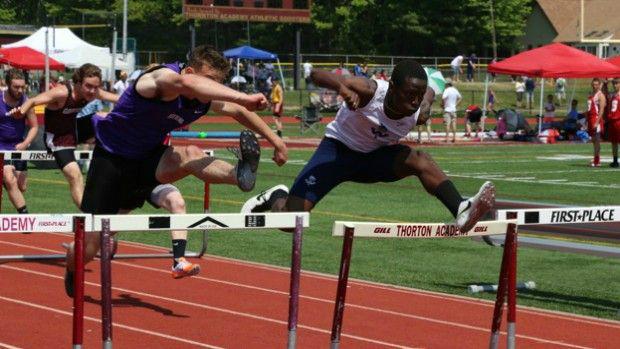 Shammah Gahomera of Westbrook has been killing it in the both the 110 and 300 meter hurdles this season. If he can hold off Michael O'Clair of Bonny Eagle and Ben Batoosingh of Scarborough in the 300m hurdles he has a good chance at sweeping the hurdling events. Expect a photo finish though, as Shammah, Michael, and Ben are all seeded at 41.x. If Westbrook can go 1-2 in the 110m hurdles with Shammah and his teammate Dominic Creenan, as they're seeded, they could get a potential of 28 points from the hurdles alone. 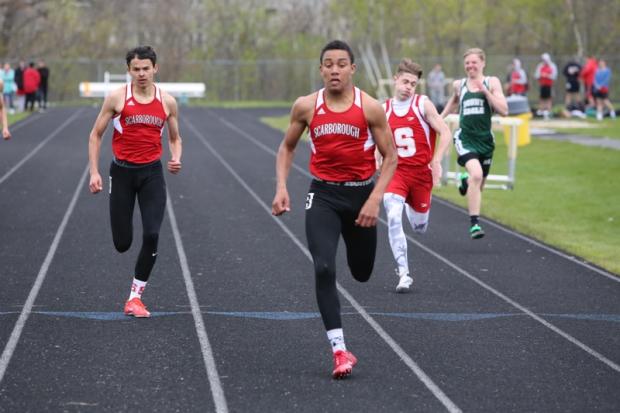 Moving over to the sprints, expect big things from freshman Jarett Flaker of Scarborough, who is seeded to sweep the 100, 200, and 400. Johnny Rosario of Thornton Academy poses a threat however, being seeded a mere .01 off Flaker in the 100 and .06 off of Flaker in the 200. Expect a showdown from these two in the shorter sprints, likely in the low 11's in the 100 and in the mid-high 22 range for the 200. As for the 400, Flaker is seeded first by over two seconds with a 51.51, but expect a showdown for second between Ramadan, Holmes, and Cole.

Expect big things in the 800 from Ben Steeves. With hopes to go 1:53 this season he's got a chance to continue lowering his state leading time of 1:55.31. He'll be coming off of the 4x8 though, and may run smart just to win to save some energy for states. Josh Lombardo of Westbrook is seeded second at 2:00.42, and maybe racing against Steeves will give him enough competition to go sub 2. Fighting for third, expect a showdown between Troxell of Deering, Malia of Scarborough, Morris of Sanford, and Heidrich of TA. 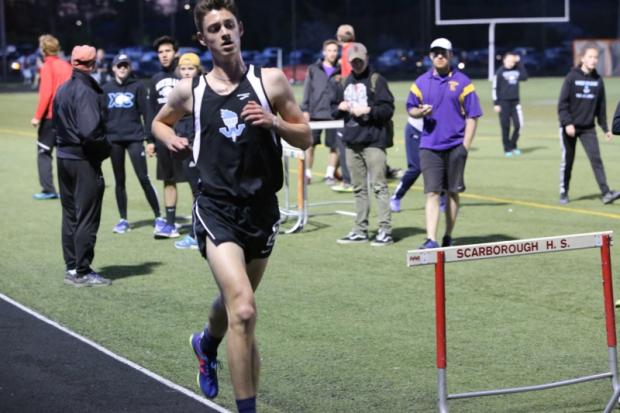 In the 1600 it will be a tight race between Lombardo of Westbrook and Pendleton of Bonny Eagle. Both seeded at 4:33.x, it's bound to be a quick race. Pendleton will be running the 4x800 prior though, so that may give Lombardo the upper hand. There's going to be some battling for those 3-7 scoring positions as well. Morris of Sanford is seeded third at 4:35.27, and after that Swett of Massabesic, Breton of Windham, Bowie of Noble, and Malia of Scarborough are all seeded in the 4:37-4:38 range. With many of these runners being fresh for the 1600, expect some fast times to come with the competition.

The 3200 may just result in some standout performances. Yahya Nure of Deering is the only runner seeded sub 10 with a 9:56.50. Alex Swett of Massabesic will be coming off of the mile, but went sub 10 back in indoors and will likely be looking to do it again. Third seed Brian Farino of Scarborough has only run the 3200 once, so it's possible he may perform better this time around with some experience under his belt.

Steven Smith of South Portland is seeded at 6:42.09 in the race walk, which seeds him over a minute faster than second seed Carlos Monsen of Gorham at 7:51. Recruited to race walk down in West Virginia, expect another elite performance by Smith as he continues to impress.

Scarborough's 4x400 team is seeded first by almost 2 seconds with a 3:31.22. Bonny Eagle is seeded second with a 3:33.13, but it's possible that Ben Steeves could close that gap with his 51.x speed. Scarborough is also seeded first in the 4x100, with a time of 44.30. Deering is seeded second with a 45.03, and will likely be trying to edge closer to Scarborough while maintaining a lead over third seed Westbrook with a time of 45.30. 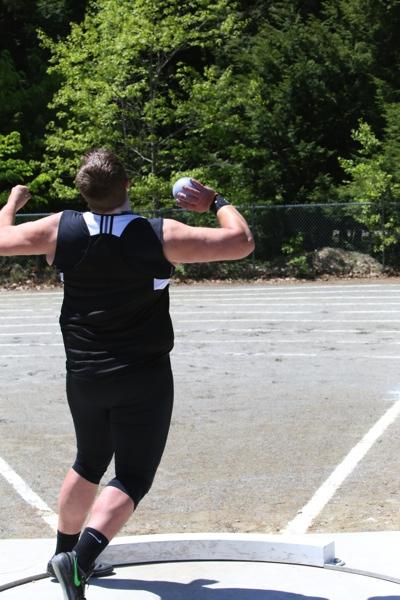 In the throws Matt Brady of Biddeford is the favorite in the shot put and discus. He's seeded 166-03 in the discus, which is a safe gap from second seed Sebastian Osborne of Scarborough at 147-06. In the shot put, Brady is seeded first with a 62-02, almost ten feet further than second seed Jason Montano of TA with a 52-10. 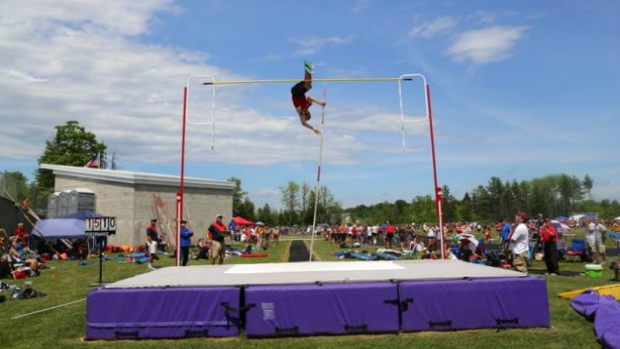 In the pole vault, Sam Rusak is the reigning champion and first seed with a vault of 15-00 feet. He's coming off an injury, so it'll be interesting to see what kind of vaulting shape he's in. Second seed Travis Snyder has jumped 14-08.5, and maybe he'll continue to edge his way closer to 15 feet. Regardless, expect good performances in the vault from Scarborough, with Rusak, Dionne, and Gardner all seeded to score.

Expect a close finish in the high jump between Grassi of Cheverus, Clavette of Scarborough, Anda of Deering, and Santeusanio of Noble, as they're all seeded first at 5-10. In the long jump Dominic Creenan of Westbrook is seeded to do well, going in first with a jump of 21-11, well over a foot and a half over second seed. In the triple jump, Ezra Chapola goes in seeded well ahead of the rest of the field with his 43-02.5 foot jump, and will likely go unchallenged.

The javelin throw will most likely be dominated by Sanford, with seeds 1, 2, 5, and 7. Eli Alexandre of Sanford is seeded first with a throw of 163-08, and goes into the meet comfortably ahead of second seed Jason Gil of Sanford with a throw of 148-09.

Kicking off the meet on the girls side, expect a fast 4x800 relay from Bonny Eagle. Seeded at 9:58.51, they're the only girls team seeded under 10. Gotham is seeded second with a 10:16.5, and Marshwood third with a 10:32.32. With fast distance runners like Amy Beaumier and Kayla Raymond of Bonny Eagle, and Anna Slager of Gorham, it'll be interesting to see how things pan out. 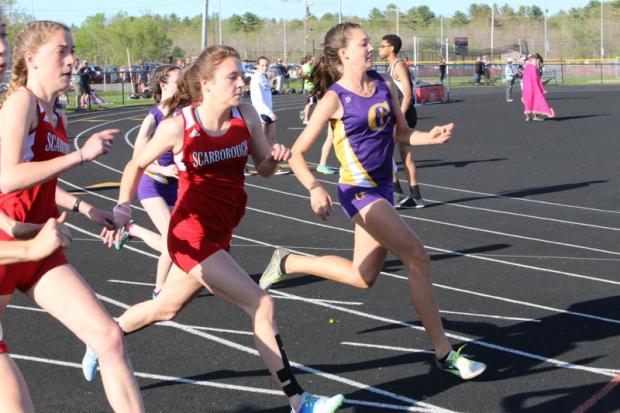 The girls 100m hurdles is bound to be a fast and competitive race. With freshman Emily Labbe of Scarborough, Nina Tasker of Noble, and Ellen Shaw of Scarborough all seeded under 16 seconds. Labbe is seeded first with a 15.75, followed closely by Tasker with a 15.79. Shaw isn't far behind, and is seeded third at 15.88. Expect a photo finish. In the 300m hurdles, Tasker is seeded first with a 47.58, followed by Shaw with a 47.72. Annah Rosvall of Deering isn't far behind, and comes in with a seed of 47.92. Shaw will likely be trying to take that SMAA title from Tasker, so it will definitely be a race to see.

In the 100m dash Gaby Panagakos of Scarborough is the first seed with 13 seconds even. She's seeded in front of Merrifield from TA with a 13.02 and Page from Marshwood with a 13.04. Panagakos will likely be trying to hold Merrifield and Page off, and may even break 13 seconds in the process. Maggie Kelly of Noble is seeded first in the 200 with a time of 27.20, followed by Biener of Massabesic with a 27.50 and Roy of TA with a 27.59. Kelly has a relatively safe lead, but will likely be pushed harder with the extra competition. 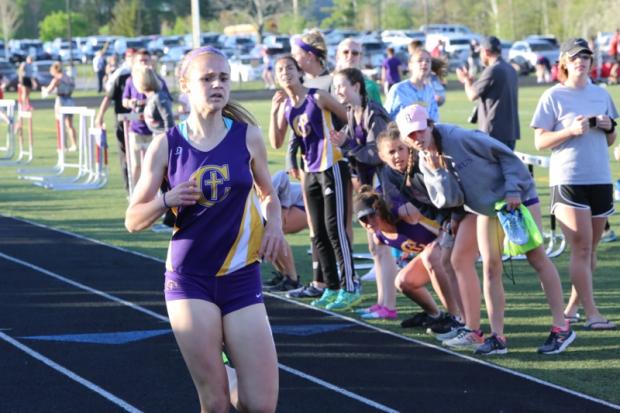 In the 400, Cheverus is seeded for a 1-2 punch with Emma Gallant seeded at 59.14 and Emily Turner at 1:00.30. It wont be easy however, with Biener of Massabesic, Griffin of Noble, and Panagakos of Scarborough all in the 61-62 range. While a couple seconds in the 400 is a lot, it's championship meets like these where some runners have breakthrough wins. Expect big performances from Gallant and Turner, but also expect for them to be pushed by the rest of their heat. This will be one of the best races of the day to see. 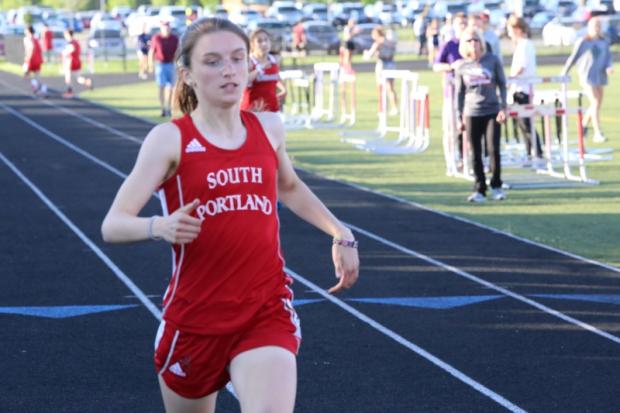 In the girls 800 Juliana Selser goes in seeded to dominate with her 2:16.46, seeded far ahead of second seed Bethany Sholl of Scarborough at 2:28.4. The race to see will be for second place, between Sholl, Abbot, Hosmer, Lyden, and Whipkey, who are all in the 2:28-2:30 range. Sholl has the endurance of a 3200 runner, so expect her to be able to hang on for the ride regardless. It will likely come down to a kick for second unless somebody manages to separate themselves early on.

The girls mile is going to be one of the best races of the day. Anna Slager of Gorham is the top seed with a 5:20.14, followed closely by her teammate Iris Kitchen with a 5:20.19. Also in the race will be Juliana Selser of South Portland, Kayla Raymond of Bonny Eagle, Bethany Sholl of Scarborough, and Amy Beaumier of Bonny Eagle. These are some of the top distance runners in the state, and they're all going head to head. We can expect a winning time that will likely be sub 5:20. Slager goes in as the top seed, but she'll have to truly push herself in order to come out on top. 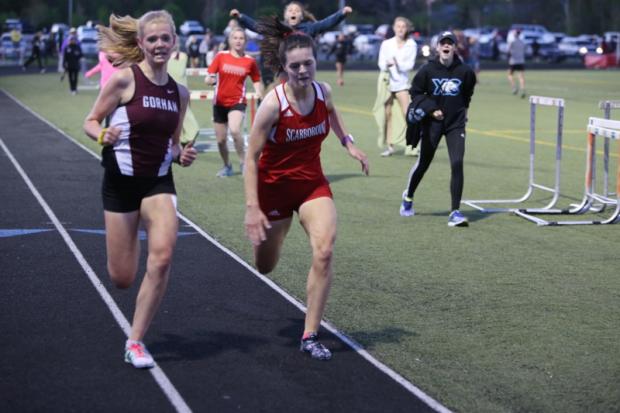 In the girls 3200 Iris Kitchen of Gorham is seeded first with an 11:41.17, followed by Amy Beaumier of Bonny Eagle as the second seed with an 11:48.04. The third seed is Anna Slager of Gorham, seeded with a 12:01.05. These three girls are all running multiple events, so it'll be interesting to see how they go about executing the race. Kitchen has a bit of a lead within the seeds, but will have to grind for all eight laps in order to keep Slager and Beaumier at a distance.

Thornton is the first seed in the 4x100 relay with a 51.23, followed by Cheverus with a 51.93. The Cheverus girls will likely be shooting for that number one spot, especially with the speed of Emma Gallant and Emily Turner on their relay. Noble is the third seed with a 51.95, and is known for their excellent sprinters. TA will have to make sure they don't give Cheverus or Noble the chance to take that title. 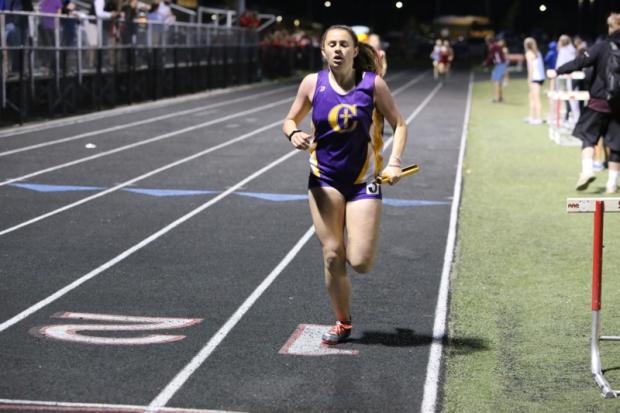 In the 4x400, Cheverus is the first seed with a 4:15.02. With Gallant and Turner, they're likely to come out on top here. Second seed is Noble with a 4:18.15, followed by Deering with a 4:19.24, and South Portland with a 4:20.03. These teams will likely be battling for second, and trying to get as close to Cheverus as they can. South Portland's Juliana Selser has 2:16 speed, so expect a strong kick from her to put South Portland in a good position. 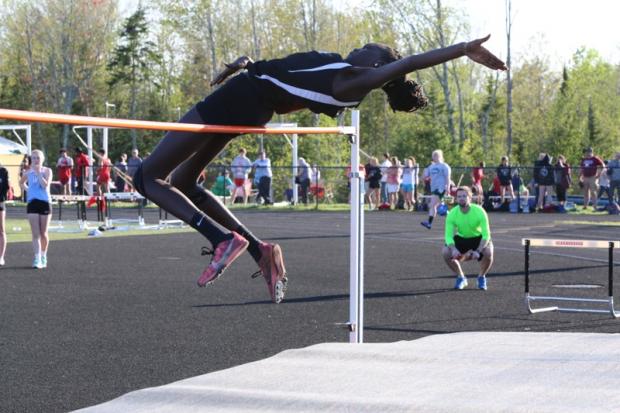 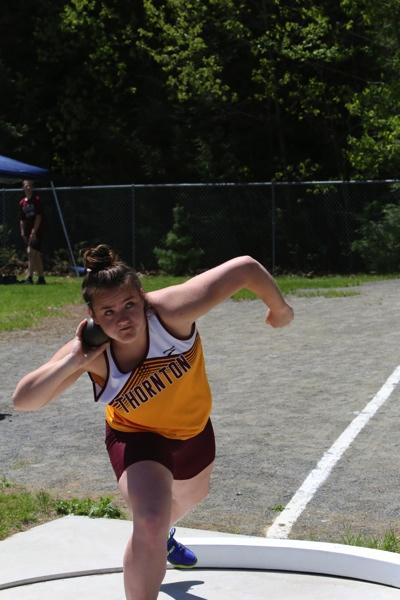 In the throws, TA is looking to do remarkably well. TA is seeded first in each throwing event, and has multiple throwers seeded to score in the shot put and discus. Curran of TA is likely looking to extend her excellent performing this year and seize the number one spot in both the shot put and discus, and Elena Grace of TA is seeded first in the javelin. In the vault, Edie Christian of Scarborough has a half foot lead with her number one seed of 10 feet. She's followed by her teammate Anna Gardner with a seed of 9-06, and teammate Kirsten Dennen with a seed of 9 feet even.