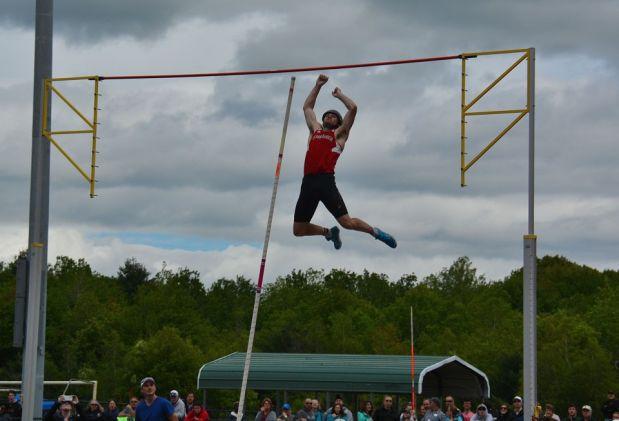 Scarborough opened the State Class A Men's Championship meet with a win in the 4 x 800 relay and closed it with a win in the 4 x 400 bookending their mid-day, record breaking win in the 4 x 100; the Red Storm's time of 42.99 eclipsed the mark of 43.32 set by Cheverus in 2014.
With 30 points from the relays Scarborough was well on its way to the 103 points it earned on the day to more than double runner-up Thornton Academy (50). The Trojans were followed closely by Messalonskee with 49, and Westbrook with 47. For Scarborough it was the second straight year taking the team title as they took it last year at Hampden.
As in the relays it was a team effort. Scarborough scored in twelve events, but there were some heavy hitters for the Red Storm. Senior Sam Rusak defended his title in the pole vault tying the 16-0 mark set by Brunswick's David Slovenski in 2008; he also hit the 6-0 mark in the high jump to match his winning jump from the 2016 championship. He shared the 6-foot mark with Edward Little's Zion Gurney and Brunswick's Sam Cenescar. Gurney claimed the 2017 title on jumps while Cenescar was third.

A pair of Johnny Rosario wins led Thornton Academy. Rosario clocked an 11.01 to win the 100 and ran a 22.48 to take the 200. In addition, Travis Snyder's vault of 15-06 got him the runner-up spot in the pole vault where he collected a new personal best. Longhau Chen claimed the long jump title and ten more points for the Trojans with a jump of 21-09.25. This added more than a foot and half to his prior best jump.
Brewer's Austin Lufkin also took two titles, defending his own 2016 crown in the discus with a throw of 175-02 and claiming the shot put title with a new personal long heave of 59-04.5.
Pre-race favorite Tanner Burton collected the title in the 110-meter hurdles for Messalonskee with a time of 14.91. After finishing 7th in the 110, Michael O'Clair of Bonny Eagle claimed the 300-meter hurdles title cracking the 40 second mark with a personal best of 39.79. Westbrook's Shammah Gahomera was runner-up in both the 110MH and the 300MH.

Packs characterized the distance events. The top three spots in the 1600 came in at 4:28.57, 4:28.79, and 4:29.86 with Westbrook's Josh Lombardo taking the title for the Blue Blazes followed ever so closely followed by Caleb Pendleton of Bonny Eagle and Shamus Malia from Scarborough. Lombardo also collected the 5th spot in the 800.
The 3200 looked to be much the same for a long period of time with a pack consisting of eventual winner Paul Casavant of Hampden Academy, Jeremiah Sands of Falmouth, Ben Breton of Windham, Yahya Nure from Deering and Mt. Ararat's Cameron Meier running together. Casavant and Sands began to pull away in the second half of the race and had a little breathing room for the last 800. Casavant's winning time of 9:27.76 was a new best. 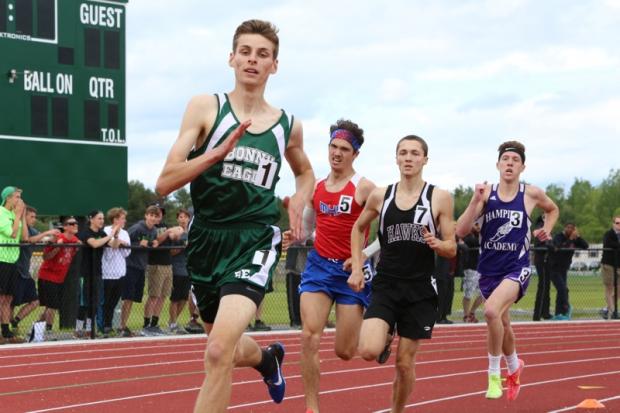 Ben Steeves of Bonny Eagle led a speedy 800 that saw the top four runners--Steeves, Wyatt Lord of Hampden, Zach Hoyle from Messalonskee and Gorham's Ethan Orach---break two minutes. Steeves time of 1:55.97 was his second fastest of the season, but for Lord and Orach the sub-two was a first. It was Hoyle's second time below the two-minute mark as he'd broken the barrier once before at the 2016 New England meet.
Steven Smith of South Portland, the runner up last year, took the men's 1600 race-walk in a time of 7:02.21.

Oxford Hills has dominion over the javelin as Dawson Stevens joined women's winner Jadah Adams in claiming to top spot in the event for the Vikings. Stevens's throw of 177-01 marked a personal best and gave him a near 20-foot margin on runner up Abbot Joy of Sanford. Stevens also earned a 6th place medal in the 100-meter run.
Alex Wilkins of Windham won the triple with a mark of 43-09.25 and also took 3rd in the long jump.
Scoring from the slow heat.
When the last heat toes the line everyone believes that that they're looking at the top finishers, folks that will end up on the podium----it's just a question of what order they'll all be in.
Most of the time.
Once in a while someone breaks out of the slow heat and snatches a spot on the podium. In the men's meet Lewiston's Abshir Abukar, Sanford's Mason Scully, and Benjamin Sivik of South Portland made the most of their lower seeds and took home hardware.
Abukar took 6th in the 300-meter hurdles with 42.11, while Scully and Sivik took 5th and 6th in the 200. Scully, running in the second of four heats, by-passed an entire heat to snatch the 5th spot in the 200 with a run of 23.27. Sivik ran a 23.44. All three performances represented personal bests.