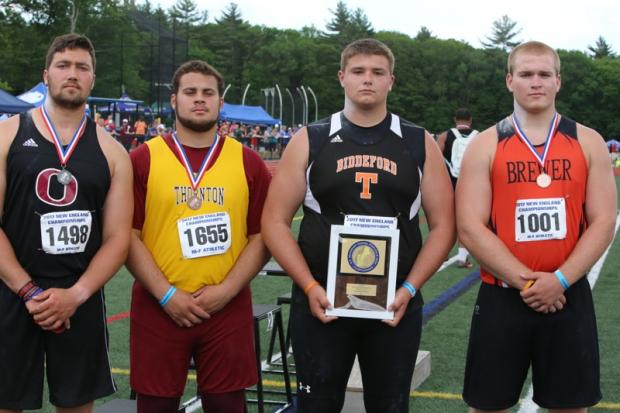 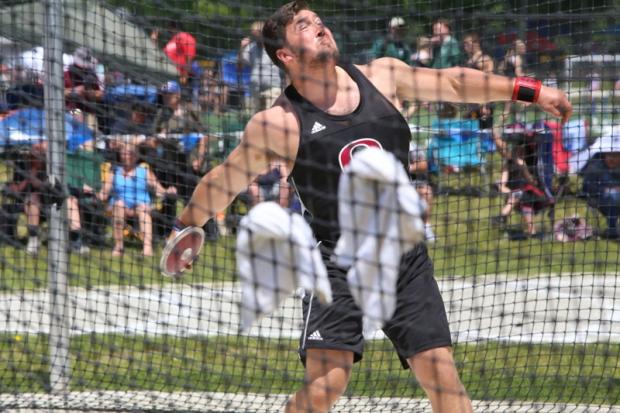 Senior Jake Koffman of Orono won the discus title leading a 1-2-3 finish for Maine throwers. Koffman's winning effort was 190-1. This was Koffman's second straight New England title, a year ago he threw 174-10. Brewer senior Austin lufkin placed second with a throw of 183-8, while teammate Jacob McCluskey finished third with a personal best effort of 174-5.  Koffman ranks number 1 in state history, with Lufkin ranked second best all-time, while the sophomore McCluskey moved up to 5th best in state history. Matt Brady of Biddeford notched 6th place with his throw off 154-3. 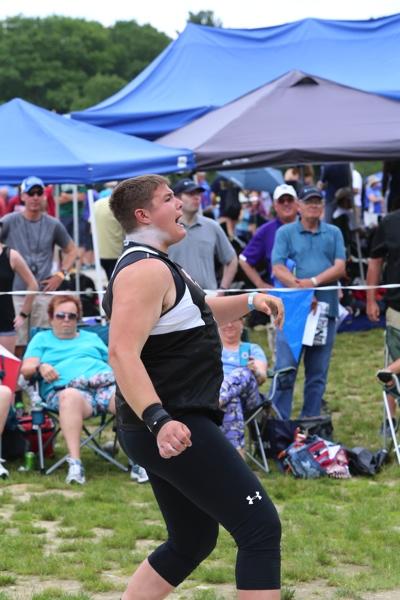 Senior Matt Brady of Biddeford had a huge day in the shot put circle as he tossed a new personal best of 64'3 3/4 to break the New England meet record of 64-2 1/4 of Daniel Guiliani of South Portland set in 2015. The mark surpassed his previous best of 62-1 thrown earlier this season, it also cements him as the #2 thrower in state history.  Orono's Jake Koffman had a personal best effort of 59'0 to earn second place. Defending champion Austin Lufkin finished 3rd with a toss of 57-5 3/4. Thornton Academy sophomore Jason Montano earned All-New England honors with a throw of 53-9 3/4. 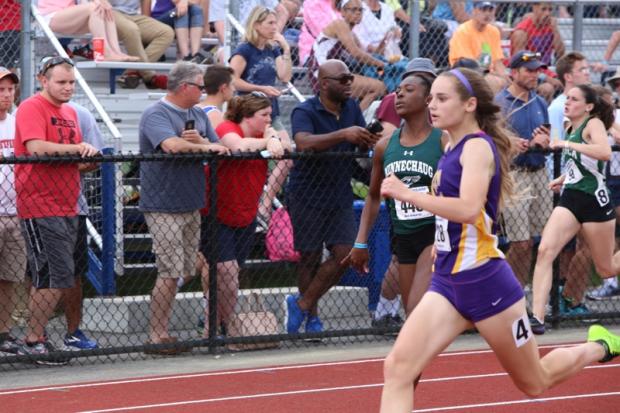 In the girls' 200m dash Emma Gallant a freshman from Cheverus surprised the field as she clocked a huge personal best of 24.81. Gallant entered the meet with a best of 25.33. Her time shattered her own freshman state all-time best and moves her to #2 on the Maine all-time best list, only behind the great Kate Hall (23.69) 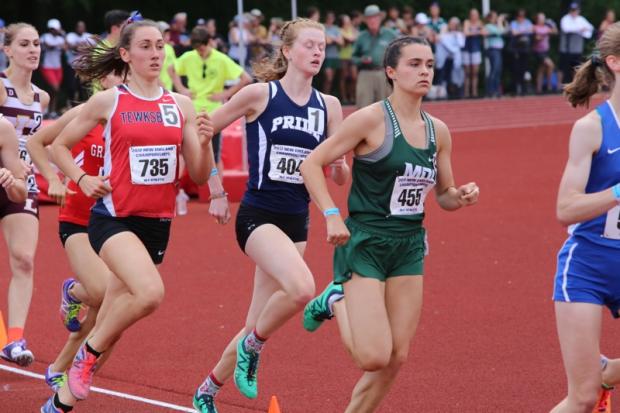 In the 800m Tia Tardy of Mt Desert Island had the race of her life as she shattered the Maine all-time best of 2:11.31 of Aleta Looker with her fourth place effort of 2:09.64. Tardy was elated with her time, and when she saw the clock was in disbelief. 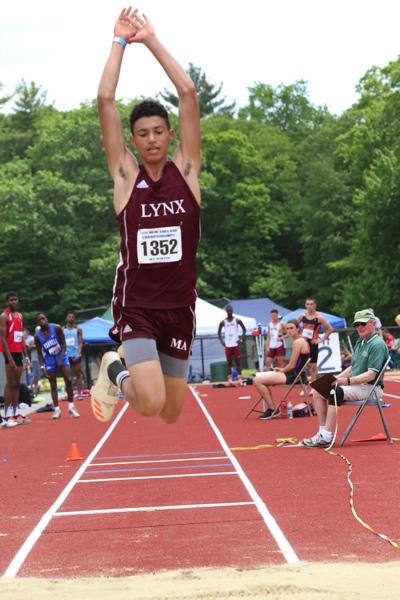 Tardy's cousin Cayden Spencer-Thompson had a big day as well, the sophomore placed 3rd in the long jump and then went on to finish as the runner-up in the triple jump. In the triple jump his mark of 47-8 1/2 broke his own state best of 47-6 3/4 set earlier this spring. His mark of 23-0 3/4 in the long jump puts Spencer-Thompson into a special group of jumpers in state history. 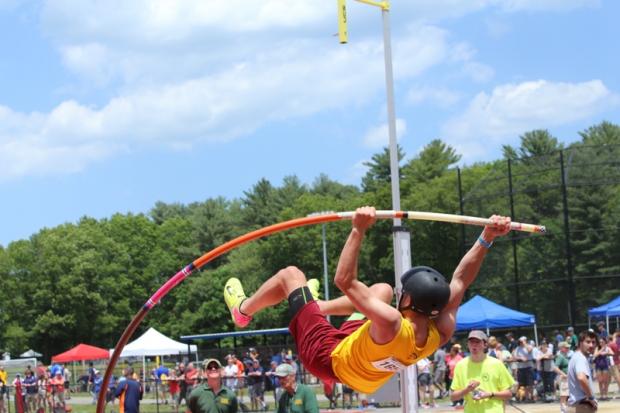 Thornton Academy sophomore Travis Snyder was the runner-up in the pole vault with a 15-3 clearance. Snyder who was the Class A runner-up a week ago earned his first All-New England honors with the second best clearance in his career. 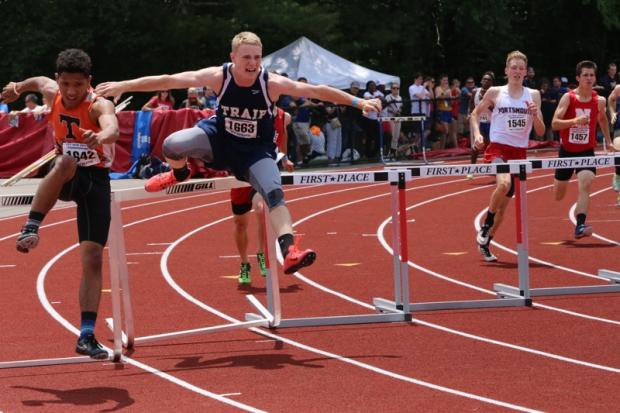 Traip Academy senior Evan Porter came up big in the 300m hurdles as he won section three in a personal best 38.41 to finish fourth overall. A year ago Porter was the New England runner-up with his 39.20 effort, he also placed 6th as a sophomore in the event 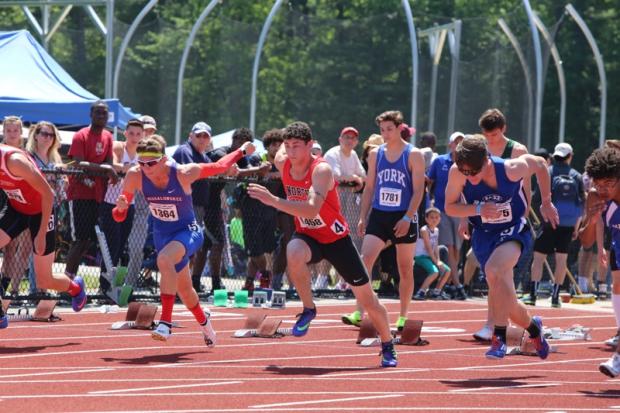 Messalonskee senior Tanner Burton ran the second fastest time of his career as he clocked 14.81 to finish third in the New England Championship 110m hurdles. Burton the Class A champion matched his third place effort from the indoor season in the 55m hurdles. 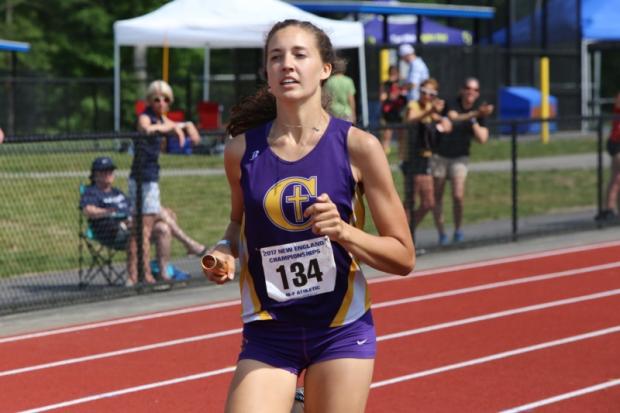 The Cheverus 4x400m relay of Emma White, Katelyn Gendron, Emily Turner & Emily Gallant ran the second fastest time in Maine history as they won section 2 in a time of 3:58.96. Freshman Emma Gallant anchored the Stags to the win in the section with a 56.5 split. 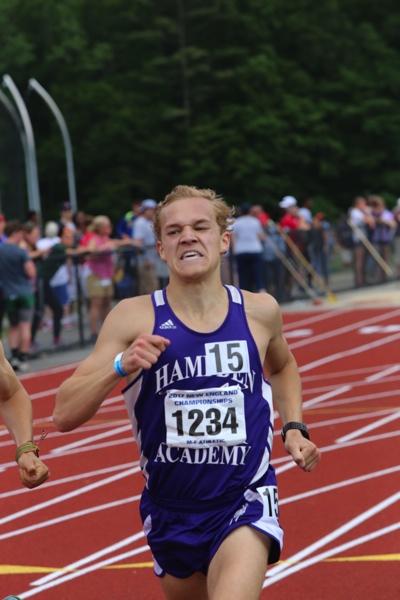 Samantha Curran of Thornton Academy threw 39-9 to finish 5th in the shot put to earn All-New England honors, a week ago she was the class A state runner-up. 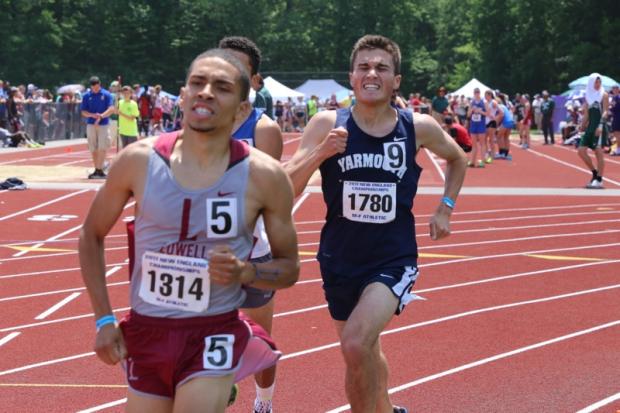 Yarmouth junior Luke Laverdiere ran a personal best 4:17.18 to finish 6th place in the 1600m. Laverdiere who completed the distance sweep a week ago at the Class B state meet, ran even pace through the 1200 before the pace quickened over the last lap.

Yarmouth's Tahj Garvey won section 3 with a new personal best of 49.88, the time would hold up as Garvey earned All-New England honors with his 6th place finish.

Falmouth senior Adelaide Cooke threw a seasonal best 130-0 to finish in third place in the discus. Cooke who won the Class A title last week with a throw of 115-5, regained the form that saw her finish second a year ago in New Englands.