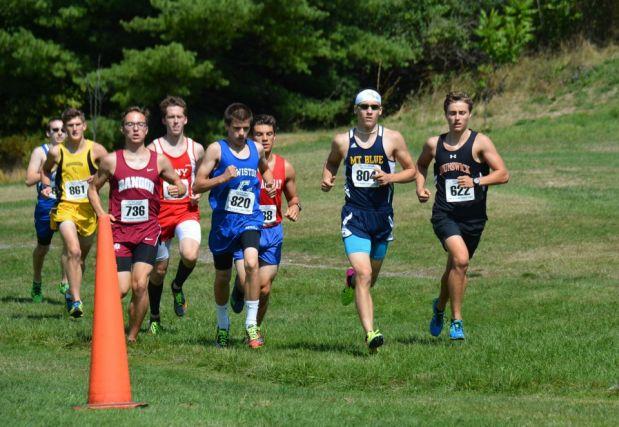 Imagine you're the number 1 or number 2 runner on your cross country team. You're probably going to finish in the top five all season long, you'll win some races, you expect a top ten finish at regionals, and you're striving for a top ten finish at the state meet. You've established a goal for your end-of-season PR.
But you come to the Quabacook Relays and there is a real shot you will finish last in your race. On the flip side, the number seven runner has a real chance to finish first in their race.
Eleven schools participated in the second running of the Quabacook relays, with ten teams able to enter full squads for team scoring. Seven separate races pitted the varsity runners against each other according to their ranking within their team. The number seven seeds run against one another, followed by the six seeds and so on until the marquee match-up when the ten number one seeds toed the line. In the varsity races the boys and girls run together, Quabacook also features a jayvee race for each gender.
Team scoring is calculated by adding the places of each runner within their heat. So the lowest possible team score is seven.
In the girls team race, Mt. Ararat took the first spot in the first five races and added a fourth, and second place finish in the final two races to close the day out with just 11 points. Mt. Ararat was without their expected number one runner, Katherine Leckbee, but her absence allowed the rest of the team to slide up a spot. The Eagle's tremendous depth was on display as they were able to take seven of the top ten spots in the jayvee race as well.
A solid Marancook team took the second team spot with 20 points in spite of not winning a single race. The Black Bears took four second spots and no Maranacook runner finished lower than fifth. Brunswick finished third for the girls competition.
In the boys team competition, Mt. Ararat, Brunswick, and Bangor were tied with 12 points a piece after the first five races had been run. The number two race set up a showdown in the final race with Bangor unable to pick up two points necessary to catch Mt. Ararat. The Eagles took the plaque with 17 points followed by Bangor at 20, with Brunswick finishing third with 25 points.
The course itself is a two loop circuit over a modified figure eight that features two substantial hills, each of which is climbed twice. The 2017 version which modified the start by taking it off the track, measures 2.54 miles. One hill climbs a root filled wooded dirt trail whose primary redeeming quality is the shade. The second hill-the "big" hill-is man made, the result of leveling two distinct areas for playing fields. The climb is abrupt and rises about thirty feet at about a thirty degree incline. The runners climb it, circle a ball field and then head straight down the incline, before traversing about one hundred meters on the level before heading up the woods hill. A circuit around another practice field brings runners back to the start. At the end of the second circuit the race heads on to the McCann Field track for the final 200 meters to the finish line
Race recaps.
Girls 7. In the girls number 7 race Mt. Ararat's Jackie Brochu took over in the final third of the race after outlasting Brunswick Freshman Maggie Johnson, and Marancook's Maura Taylor. The trio climbed the big hill together during the second loop but Brochu collected the distance she need to win on the plateau and came back down the hill with a decent lead which she had stretched to 9 second by the time the race was over. 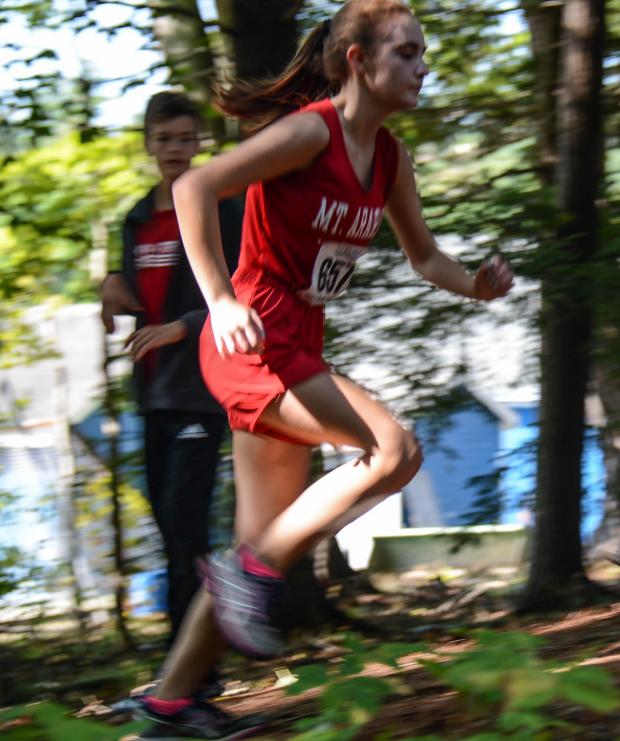 Girls 6. In the second race featuring the 6th seeded girls, Mt. Ararat's Fay O'Donnell looked solid finishing with a 20 second margin over Hannah Richardson of Cony. The pair were shoulder to shoulder for much of the earlier part of the race but post race when asked when she started to feel confident about winning O'Donnell answered, "the second time up the big hill." O'Donnell was alone on the track and had time to look behind her in the final straight away. 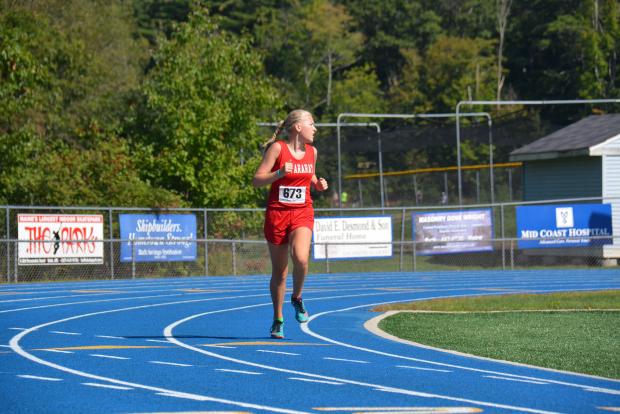 Girls 5. The fifth seeded girls sent out five runners who early-on looked to have a chance to win. The home team's Emma Gould, a long and triple jump specialist who this time of year is ordinarily found on a soccer field helped the Morse Shipbuilders round out their roster. Gould was joined in the lead pack by Cony's Jillian Brown, Brunswick's Kathleen Koval, Madelyn Dwyer from Maranacook, and the race winner Katie Lynch of Mt. Ararat. The loose five person pack made for some early lead changes, and plenty of opportunity for shifting positions among the followers but Lynch had pinned down the top spot by mid-race and was all alone on the blue of the McCann Field track. Cony's Brown is a sophomore running her first cross country season so expect her to put pressure on the rest of the Rams' squad as the season progresses. 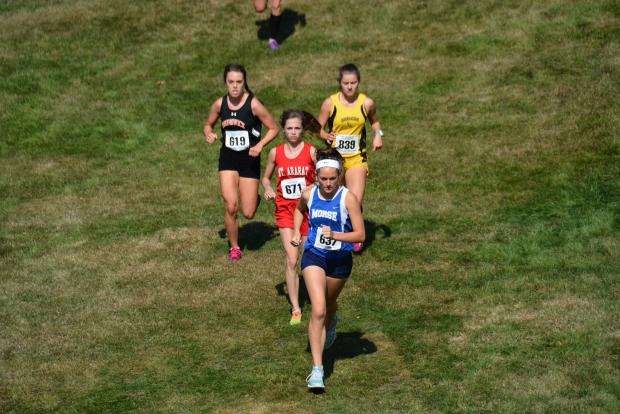 Girls 4. In the fourth race Lawrence's Selam Heinrich, the only Bulldog entered in the girls' races, looked determined to run the race for the enter team. Heinrich took an early lead in a three runner pack with Maranacook's Lilly Welch and eventual winner Sara York of Mt. Ararat. As in first three races, by the time York hit the track she was alone in front and ended with a 21 second cushion over Welch. Cony's Zina Gregor finished third.
Heinrich's chances were hurt by the big hill, but not going up it. She took a spectacular fall coming down the hill and was lucky to land on her hip with her legs elevated so she could slide and minimized the chance for serious injury. She recovered quickly but lost some ground and finished fourth. The fall represented the real danger of running downhill at speed on such a steep incline. There was heavy rain on Friday night and the grass was very wet at the beginning of the race. This steep incline never really dried out and was showing muddy streaks from the pounding it took by the middle of the day. 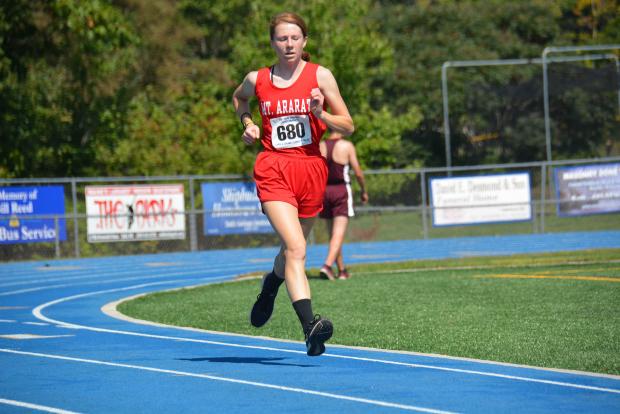 Girls 3. In the third race, there was really no drama. Mt. Ararat's Karlie Leighton, the sixth place finisher at the Laliberte Invitational, ran a 16:58 and put nearly a minute and a half between herself and the closest girls. She finished ahead of some of the third seeded boys; Leighton's. time was good enough for third overall in the girls competition, just off the 16:54 teammate Camila Ciembroniewicz put up to take second in the girls' number one race. 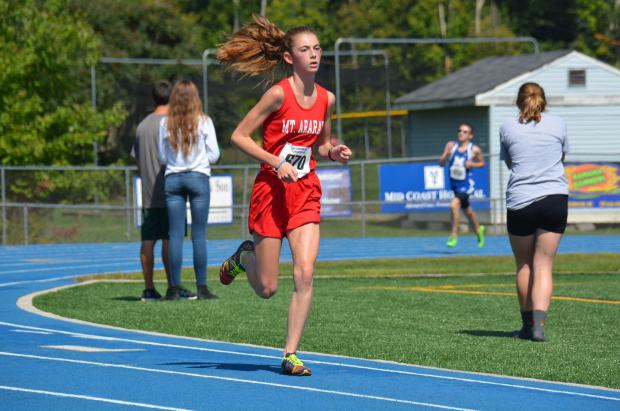 Girls 2. By contrast the girls' number two race was competitive through-out and wasn't determined until the final 400 meters. Early-on the race was led by Cony's Tessa Jorgensen followed by Bangor's Erin McCarthy and Mt. Ararat's Anna Pederson, an exchange student from Denmark. The first time up the hill offered McCarthy the chance to grab the lead and by the time they had circled the ball field at the top of the hill Pederson was running a strong second.
Coming into the hill the Brunswick Dragon's Isabella Pols was seventh. When the runners started the second loop Pols had moved up to fifth and would work her way to third for the second run up the big hill with Pedersen and McCarthy still running in tandem for the top two spots. It wasn't until the wooded hill that Pols made her move emerging from the roots and shade just on Pedersen's heels. With about 600 meters on flat grass and track remaining  the kick was on and Pols ended up on the blue of the track alone to finish with an 18 second lead over runner-up McCarthy of Bangor. Jorgensen, the early leader, also put on a strong push to overtake Pedersen on the track and claim the third spot for Cony. 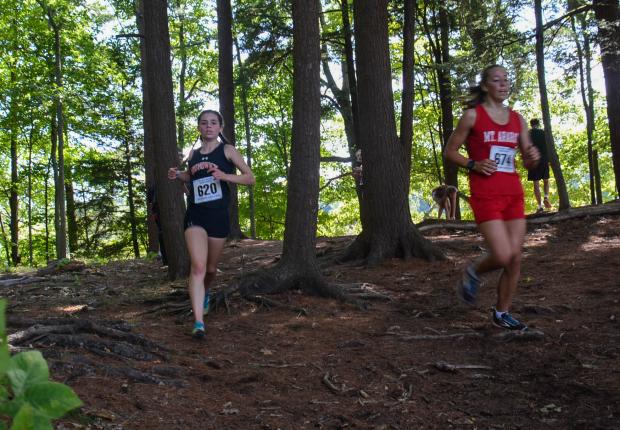 Girls 1. Edward Little's Jillian Richardson ran away with the title in the girls' number one race clocking in at 16:17, thirty-seven seconds ahead of the runner-up Camila Ciembroniewicz of Mt. Ararat. Richardson's time bested the 2016 winning time of 16:30 posted by Cony's Anne Guadupi. The number one runner from EL topped her own 5th place finish time from 2016 by a minute and nine seconds. 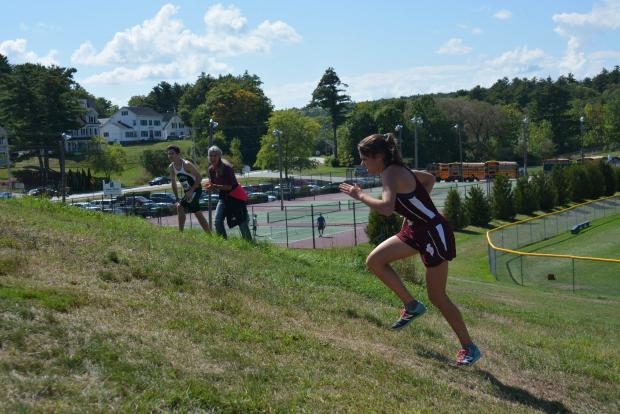 The weather was clear and sunny with start time temperature a moderate 64 degrees; the temperature remained mild as it just reached 70 by final races. By contrast 2016 was hot and humid.
Boys 7. Gabriel Escobar of Lewiston took the Blue Devils lone win running in the seventh race. Escobar's 16:35, just edged Brunswick's Kyle Hanson, a senior running his first season of cross country, who put up a mark of 16:36. At the finish it was the closest race of the day for either gender. The pair were shoulder to shoulder the whole way and set a tone that kept Brunswick in the mix for the team championship through the first five races. 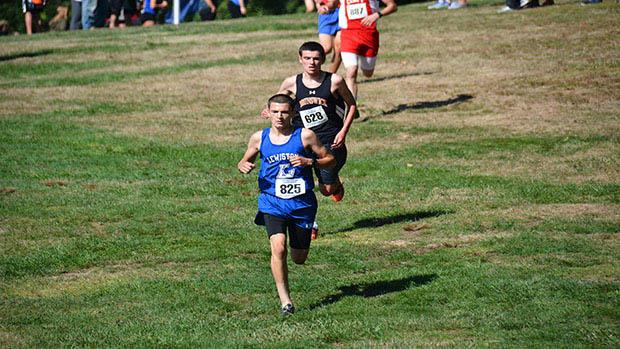 Boys 6. Aiden Simmons took Brunswick out to a good lead in the sixth race before succumbing to Bangor's Henry Westrich the second time up the big hill. 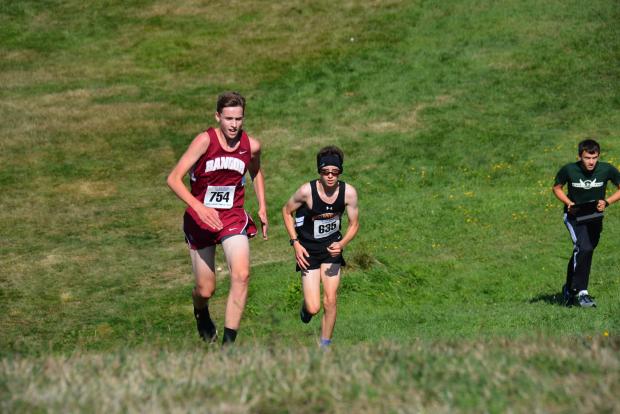 Boys 5. The fifth race featured another Bangor win with Gordon Doore taking the top spot at 15:28. Mt. Ararat's Josiah Langworthy was second as the Eagles crept into team contention having taken 4th in the 7th race and 3rd in the sixth race. Brunswick maintained pace as Ryan Olson, another senior in his first cross country season, placed 3rd. 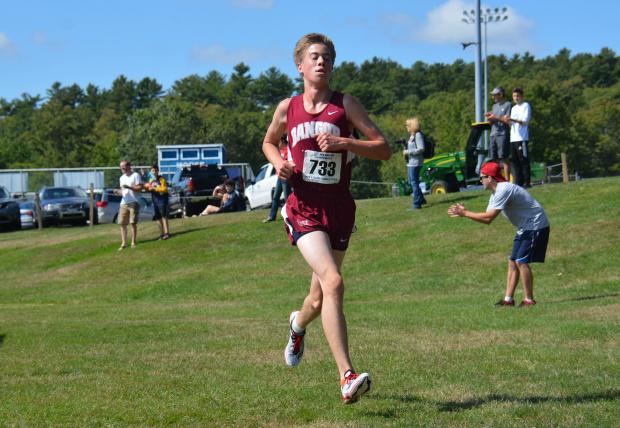 Boys 4. Nate Cohen took the first medal for the Eagles winning the number four race with a time of 15:17, an eighteen second lead over runner-up Daniel Lyons of Brunswick. Cohen looked very strong over the last 600 meters. 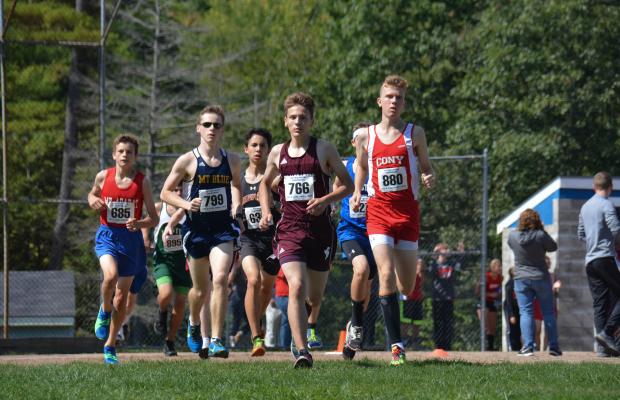 Boys 3. The Rams bounced right back in the number three race with Bangor's Patrick Fraser taking the first spot at 14:46. There was tight race for the runner top position as Mt. Ararat's Devin Hoskins finished at 15:05 followed by Brunswick's Cam Ashby whose 15:07 just edged Mt. Blue's Sam Stinson at the line. The point Ashby gained at the line was crucial at the time as it left the Dragons with 12 total team points putting them in a dead-heat with Mt. Ararat and Bangor. 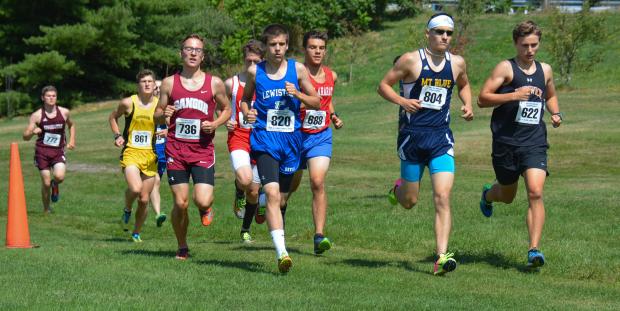 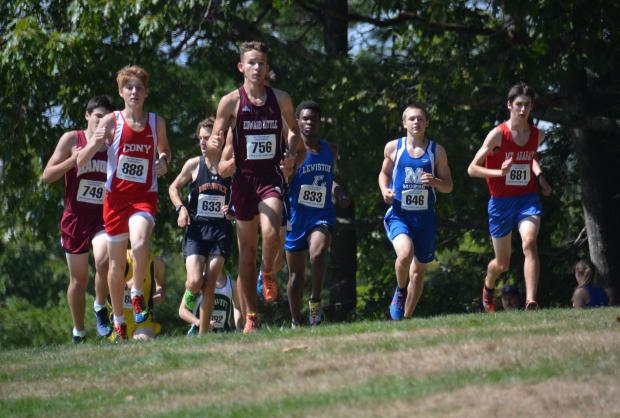 Boys 1. Coming into the final race. Mt. Ararat led Bangor 16-18. The Rams's Gabe Coffey who came into the weekend with the fastest 5K time so far this season faced off against Mt. Ararat's Lisandro Berry-Gaviria. Coffey had taken first in a 5K last weekend at Bangor that featured Hampden and Camden. At the same time Berry-Givaria had followed his stellar Laliberte Invitational win by putting up a 17:17 5K time on Mt. Blue's historically tough course.
For Bangor to win Coffey needed to beat Berry-Gaviria, but also needed help from a third team.   For a while it seemed possible as Brunswick's Andrew Chingos led the pack to the bottom of the first hill. Even following the the hill as Mt. Ararat and Bangor established the one and two spots, Lewiston's Abbas Muktar stayed just off the lead until the second climb up the steep hill, but for the final 800 meters it was a two man race between Coffey and Berry-Gaviria. The Eagle's runner finally able to break way in the final 250 meters to finish at 13:47 beating Coffey by five seconds and giving Mt. Ararat what it needed to sweep the team titles. 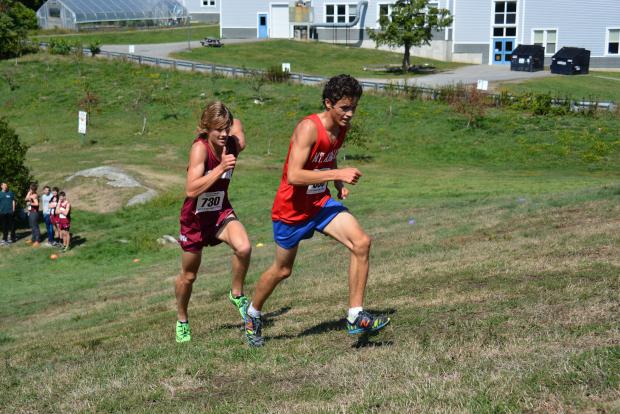 Quabacook is an Abenaki name for Merrymeeting Bay, the body of water where the Androscoggin and Kennebec Rivers meet that defines the communities served by Mt. Ararat, Morse and Brunswick. The race, hosted by Morse, is a joint effort of the three schools.