Miranda Dunton of Camden Hills felt comfortable enough from her position among the early leaders in the 5K at Cony Friday September 22nd to mug for the camera. She was running third just behind teammate Grace Iltis, Edward Little's Jillian Richardson, and a shade ahead of Molly McGrail of Maranacook when this photo was taken. 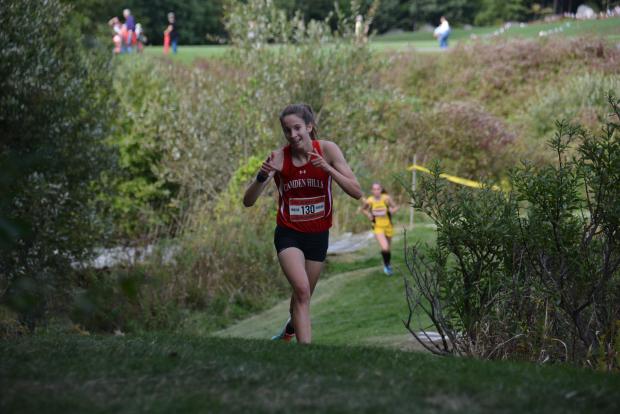 At the time she didn't know she was going to run a 6K. Just around the next corner the leaders would plunge down into the Augusta Nature Education Center and should have shortly thereafter begun the steep ascent up the "mountain." Unfortunately some runners awaiting the boys race misdirected the four leaders onto a second turn around the "jayvee loop" rather than across a bridge and up the mountain. Although they finished the course, the leaders had lost too much ground to figure in team scoring.
The course itself begins on a practice field behind the high school and winds its way through a field surrounding retention ponds before plunging into a wooded conservation area, the Augusta Nature Education Center, maintained by the City of Augusta. If the course is followed correctly it should make one loop around the "jayvee loop" and then ascend "the Mountain" a long and steep hill with (if Garmin is accurate) a total elevation gain of 106 feet. The paths are well maintained walking paths with a dirt surface supplemented by wood chips in areas susceptible to erosion. After the mountain, the course winds its way through a bucolic retired granite quarry and concludes with a series of three gullies with abrupt climbs and drops of fifteen feet or so before depositing runners back into the open on the Cony fields.
It's a challenging course and most spectators, if they see any of the wooded portion at all, catch just the final rolling gullies. It's a well marked and maintained course and the staff at Cony is always prepared to handle a big meet. They've hosted the KVAC meet for several years; the Laliberte Invitational is a huge meet every August. But it is difficult to control what comes out of spectators' mouths in the woods. This is one reason the pre-race course walk is so important.
Just off the lead pack were Maranacook's Laura Parent and Cony's Tessa Jorgensen who ran through the spectators to get the race back on track; the pair ended up finishing 1st and 2nd. In some respects, the snafu served notice on the rest of the KVAC that Camden and Maranacook have very solid and deep girls' cross country teams. With Grace Iltis and Miranda Duncan finishing but not figuring in the scoring, and Augusta Stockman not running, Camden still took the team win in the nine team field. Maranacook---with Molly McGrail not scoring---still took second.
The Windjammers scored 51 points on the finishes of Phoebe Root (5th), Claire Wyman (6th), Rose O'Brien (7th), Alli Wells (11th) and Lauren Rothwell (24th). 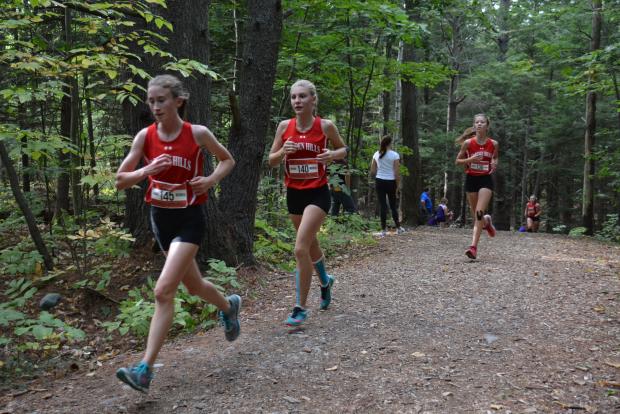 Meanwhile Maranacook took second with 61 points. Led by Laura Parent's 1st place finish (22:17), the Black Bears also got points from Sophie O'Clair (4th), Lily Welch (15th), Madelyn Dwyer (16th) and Caroline Welch (28th).
Rounding out the team scoring were Cony (79), Messalonskee (82), Hampden (99), Belfast (129) and Edward Little (180). Waterville and Gardiner competed but did not enter the necessary five runners to be included in team scorings.
The top ten finishers included Cony's Tessa Jorgensen (2nd), Ava Dowling of Hampden (3rd), Tara Jorgensen of Cony (8th), Waterville's Gwinna Remillard (9th), and from Messalonskee Charlotte Wentworth (10th).
There was much less drama in the boys race as Wyatt Lord of Hampden took an early lead and held it for a first place finish in 17:52.98. Teammate Grahme Sokoloski was second with a time of 18:27.21, Jason Mathies (6th), Lucas Hale (16th) and Zachary Steigert ((27th) rounded out the 52 points Hampden collected for the team win. 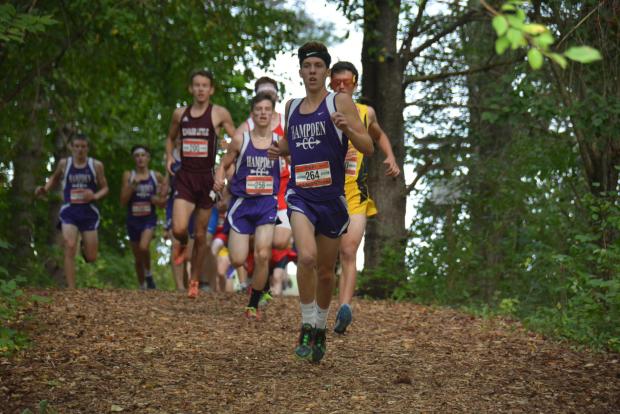