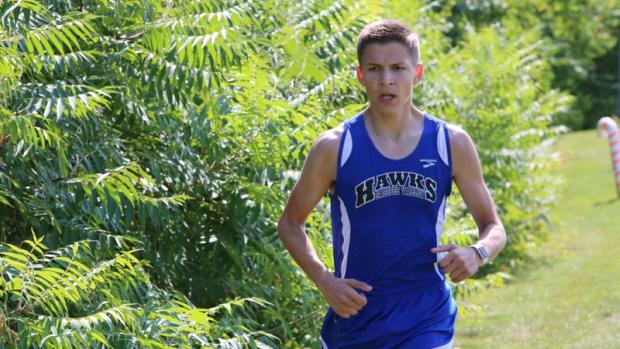 Troy Hendricks of Sacopee Valley comes in as the favorite in Class C South. Hendricks has had a fantastic 2017 season, and comes into Saturday with a season-best of 16:19 for 5k, which is the fastest time in Class C. Hendricks finished 11th in this race a year and has posted four wins in 2017. He recently finished second in D2 at the WMC Championships, running 17:33. While Hendricks is the favorite, there are a handful of athletes looking to challenge the senior. Henry Spritz of Waynflete is a likely candidate to be in pursuit of Henricks. He's one of three runners in Class B South to go under 17:00 this season after he ran a personal-best of 16:43.16 at Freeport High School back in late September. He recently finished fourth in D2 at WMCs running 17:46. Spritz finished sixth in the Regional last year.
The other runner who has broken 17:00 this season is Nick Neveu of Maine Coast Waldorf. Neveu ran a personal-best of 16:52.41 at Festival of Champions finishing 39th overall, and recently finished fifth at WMCs running 17:47. He's broken 17:20 for 5k twice this season, and ran to a fourth pace finish at last year's regional. Neveu's brother, Matanicus, has a chance for a high finish on Saturday. The freshman has had a solid first season on the trails and ran a season-best of 17:35.46 at Festival of Champions to finish sixth in the frosh race.
Blake Erhard of Boothbay could emerge from that chase pack on Saturday. Erhard has won five races in 2017 and comes in having run 17:44.90, which he ran back on September 13. He recently won the MVC Conference Championships last weekend, covering the notoriously difficult UMaine-Augusta course in 18:11.30. He finished 10th last season. Luke Bartol of Maranacook is another runner to watch. He's run 17:12.33 this season, which ranks fourth in the region, and is coming off a sixth place finish at the KVAC Championships where he ran 18:25.80. Bartol was 29th in Class B a year ago. Other runners to watch on Saturday include Gaelan Boyle-Wight of Telstar, Kyle Ames of Boothbay and Chris Hamblett of North Yarmouth.
After edging Waynflete by two points at last year's regional, Maine Coast Waldorf comes into Saturday as the heavy favorite to defend its title. Led by Nick Neveu, who's expected to challenge for a top three finish, Maine Coast has three of the top eight 5ks in the region this season. Neveu's brother, Matanicus, is in his first year of cross country and has been their consistent second runner. He's run 17:35 for 5k. Finn Dierks-Brown has been solid as their third runner. He's gone under 18:00 this season, and if you have three runners capable of sub-18 times in this region, you have a great chance. Aiden Kusche and Eli Gunderson round out their top five. They both have run under 18:30 this season. Maranacook, which made the move to Class C this season, is looking to take home some hardware. Luke Bartol has been their clear-cut top runner this season, and will look to contend for a top five finish. Robbie McKee and Tate Mendall both have season-bests of 18:31 in 2017, and have been reliable second and third runners for the Golden Bears. The key for them getting a high finish on Saturday is getting good performances for its fourth and fifth runners, Spencer Dyer and Gabe Fein.
Boothbay and Waynflete are evenly matched, and should have a great battle for third place. Boothbay has two runners in Blake Erhard and Kyle Ames who will contend for top 10 finishes. They fall off considerably after that though, and will need great performances from its entire top five to get a high finish. Waynflete has a runner in Henry Spritz who will contend for the individual title. His low stick will be very important for the Flyers. Levi Lilienthal has consistently been their second runner and has run 18:00.57 this season. If he can nab a top 20 finish, it would be huge for Waynflete. The Flyers, however, fall off a bit after that. John Veroneau has been steady as its third runner but if Waynflete hopes to fall into the top three for the second consecutive season, they are going to need big performances from its fourth and fifth runners. Other teams with top five aspirations on Saturday include North Yarmouth Academy, St. Dominic and Monmouth.
Tweets by MaineTrackXC