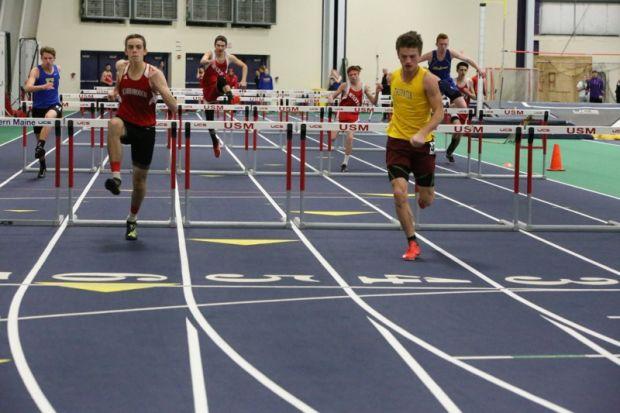 USM Relays: Closing Out 2017 With a Bang

The 19th USM Relays closed out the 2017 racing calendar, and did so in a big way.

Thornton Academy junior Travis Snyder won the pentathlon earlier in the day, then hit the runway for the pole vault later in the afternoon. Opening at 14ft after all other competitors had exited his first attempt miss had some wondering whether he would be able to fight off the fatigue from his previous five events.

Snyder had things under control with his second attempt make at 14ft, he would then raise the bar to 15-1, which was a new meet record, and would give his Trojan teammates the win in the pole vault relay. With a strong plant Snyder rose up and cleared the bar with ease giving him the new meet record, breaking the year old mark of Scarborough's Sam Rusak. The mark was also a new Thornton Academy school record breaking Snyder's previous best of 15-0 from a year ago. 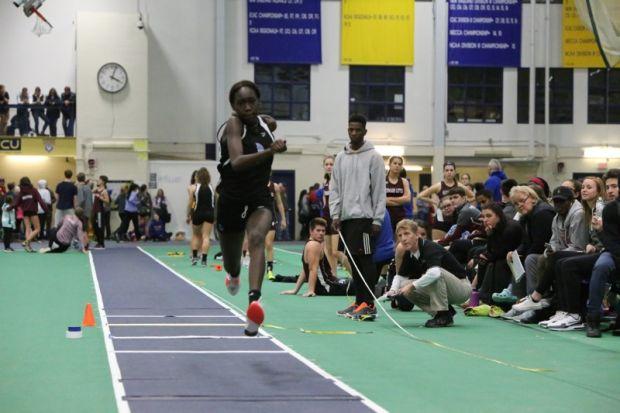 Westbrook's Nyagoa Bayak put together a strong day as the junior equalled the meet record in the high jump of 5-6 held by Yarmouth's Emma Egan. Bayak added a win in the triple jump with a leap of 36-1 and took the long jump as well with a mark of 15-11 1/2. 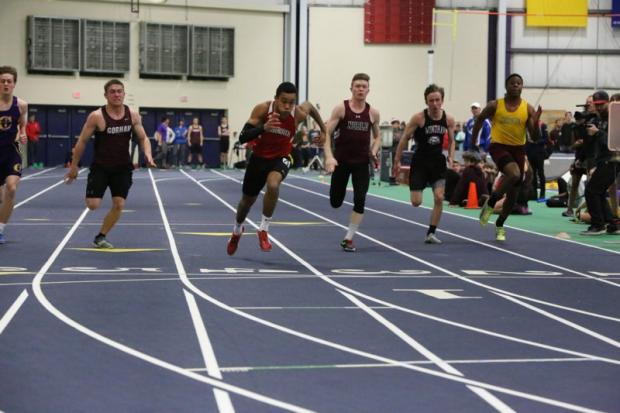 Scarborough sophomore Jarett Flaker had an outstanding day with a pair of individual wins in the 55m & 55m hurdles. Flaker started off with a state leading effort in the hurdles as he held off a strong challenge from Westbrook's Dominic Creenan. The winning time of 7.86 was a new personal best for Flaker while Creenan's 7.94 was a seasonal best.

In the 55m dash the state leader at 6.60, Flaker clocked 6.62 in the trials to lead the field into the final. In the final the defending Class A champion clocked a new personal best of 6.59 to easily take the victory. The mark moves him into a tie for the sophomore state best, and the fourth best mark in state history.

Junior Molly Murnane of Scarborough running the 55m dash for the first time has the fastest qualifying time of 7.53, in the finals she showed another gear turning back a strong field in a state leading 7.38. 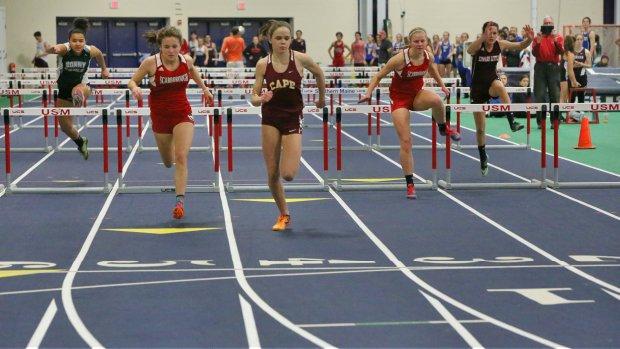 Darcy Cochran a sophomore of Cape Elizabeth the defending Class B hurdle champion showed she's in mid season form with a time of 8.67 in the trials, then a 8.58 to win the final. The 8.58 mark is the eight fastest hurdle time in state history and a new state leading mark

Luke Laverdiere of Yarmouth dominated the mile winning by 17 seconds. Laverdiere's winning time was a new state leading mark of 4:22.16, a two seconds faster than his winning mark from a year ago.

In the girls mile South Portland senior Juliana Selser used her strong kick to pull away for a three second victory. Selser's winning mark was a state leading effort of 5:12.63,  about a second faster than her winning effort from a year ago. Gorham's Anna Slager had a strong effort for second with her 5:15.60 while Bonny Eagle's Kayla Raymond turned in a new personal best with a 5:18.02.

In the shot put Jason Montano of Thornton Academy threw a Class A leading mark of 51-5 3/4 to easily take the victory.

Edward Little's Lauren Berube cleared a state leading 10-0 in the pole vault to win the event.