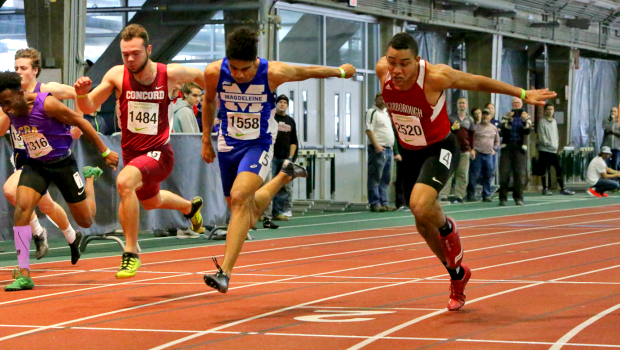 With the temperatures well below zero outside inside the Leverone Field House at Dartmouth College athletes from Maine were setting the track and field on fire with their top notch performances. On the day Maine athletes won five events on the track and two more in the field.

Scarborough lead the Maine contingent on the boys side with a six place finish as the Red Storm tallied 26 points, Thornton Academy was 7th with 22 points. On the girls side Cheverus was the top Maine team with a four place effort, the Stags scored 34 points. Scarborough was 8th with 23, while Westbrook placed 10th with 20 points.

Leading the way was Scarborough sophomore sprinter Jarett Flaker who won both the 55m & 300m. In the 300m, Flaker broke the Maine all-time best of 35.50 with his winning effort of 35.23. He led from the gun and pulled away from the field in the last 100m for a convincing win with a .72. Before the 300m Flaker posted personal best efforts in the prelims and semis of the 55m dash with times of 6.58, and 6.55 respectively. After the 300m he lined up about an hour later for the 55m dash final, after a shaky start, he was able to come back with a strong lean to edge out the runner-up Joakim Genereux of De La Magdele, QC by .01. The winning time was 6.52, moving Flaker into the #2 Maine all-time mark in state history.

Westbrook's Nyagoa Bayak won the high jump with a personal best and Maine state record tying effort of 5-9. Bayak won the competition with his first attempt clearance at 5-8, which was a new personal best. With the bar raised to 5-9, the junior missed on her first attempt before clearing the bar on her second attempt. She took three solid attempts at 5-10 just knocking the bar off each time. Her winning mark of 5-9 currently ranks her US #2.

Bayak would also add a second win in the triple jump with a leap of 37-3 1/4. The distance was a new personal best, improved on her own state leading mark and moves her to the 7th best performer in state history 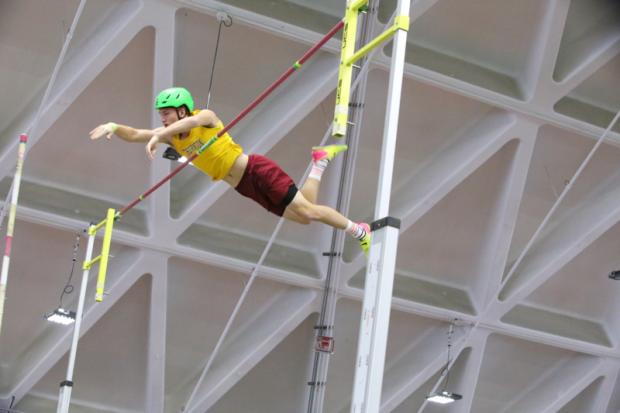 Travis Snyder of Thornton Academy came into the meet as the top seed with a 15-1 best to his name this winter. Snyder has struggled at Dartmouth Relays before including a no height a year ago. Snyder entered the competition at 14-0, and after making that height the pressure was off. He would go on to clear 14-6, and 15-0. He took three attempts at a height of 15-4 but was unable to clear. 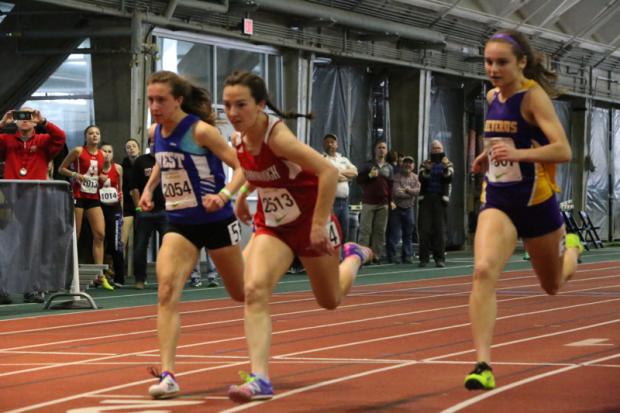 Scarborough junior Molly Murnane who ran the 55m dash for the first time at the USM Relays a week ago, showed speed trumps experience as the speedster ran times of 7.43 in the prelims, 7.41 in the semis before winning the final in a time of 7.39. In the final she had to hold of a strong challenge from Cheverus sophomore Emma Gallant who posted a personal best 7.44 to finish second.

Gallant of Cheverus had previously run the 300m where she clocked a personal best 41.24 to win the event by .77 seconds. The time is the 4th best effort in state history at the event. Freshman Victoria Bossong of Cheverus running in heat #3 ran 42.04 to finish in third place. The two would combine later in the meet on the runner-up 4x400m relay that ran just off the state record with a very strong effort of 4:09.76. 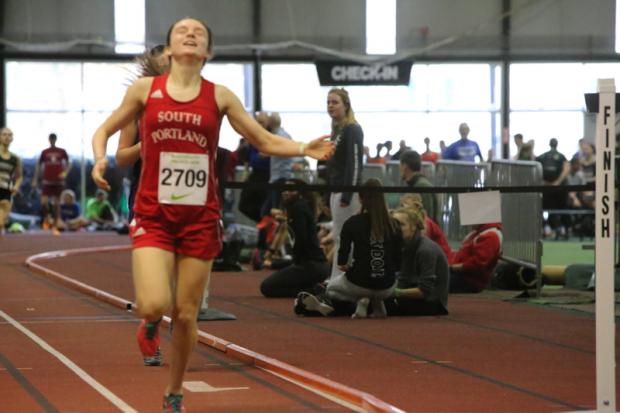 In the 800m South Portland senior Juliana Selser showed her regular patience running style letting the pace go out fast and holding back until she unleashed a strong kick on the final lap to win the event in a time of 2:17.04. She edged out her future Umass Lowell teammate Izzy Gesing of Oxbow, VT. Selser who won the Class A title a year ago has been battling injuries but was ready to go on Saturday. 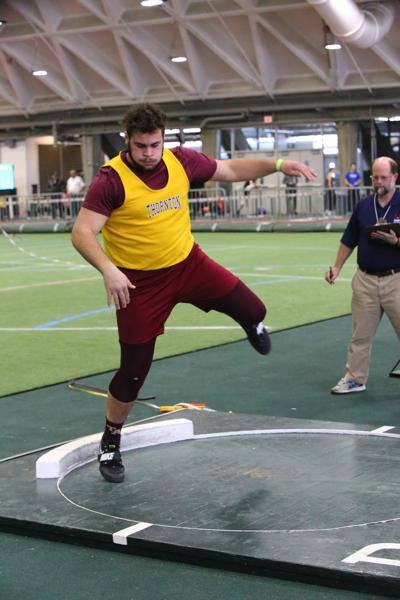 In the boys shot put junior Jason Montano of Thornton Academy set an indoor personal best with a throw of 52-7 3/4 to place second overall. The mark moves Montano to the top of the Maine leaderboard. 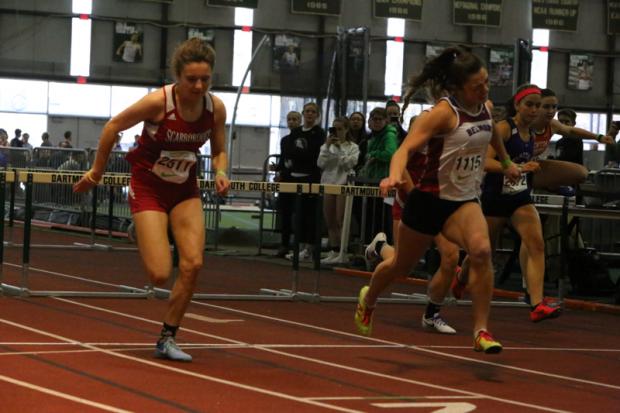 In the girls 55m hurdles the Scarborough duo of Emily Labbe & Madison Marinko placed second and fourth in the hurdle final. Labbe clocked a new sophomore state record with her 8.51 runner-up finish, the mark places her 8th best in state history, and moves her to the top of the state leaderboard. Teammate Marinko ran a personal best of 8.80, that mark is Class A #2, and State #3. Nina Tasker of Noble finished 7th in the final running 9.06.

Sarah Cox of Waterville of threw a huge personal best of 38-8 3/4 to finish third in the shot put, that effort improves of her previous state leader.

Mahamed Sharif of Westbrook won section #2 in a personal best 53.29, that mark was good enough for a third place effort. He currently ranks Class A #3 performance. His teammate Dominic Creenan jumped 20-11 in the long jump to finish 4th, his mark is Class A #2.

Luke Laverdiere of Yarmouth set the pace in the boy mile for 1400 meters before the kickers took off. Laverdiere would hold on for a fourth place finish with a 4:23.92 effort.

Anthony Clavette of Scarborough jumped 6-2 to place 4th in the high jump, while Drew Gardner nabbed a 5th in the pole vault with a personal best 13-0 clearance, that mark is Class A #2.

Emma White of Cheverus jumped a state leading 16-8 1/4 to place 5th in the long jump. Scarborough's Anna Gardner cleared 9-0 in the vault to finish 6th. The Gorham girls placed 5th in the sprint medley with a time of 4:37.61. While Anna Slager of Gorham ran to a 6th place effort in the seeded mile clocking a time of 5:18.55. Morgan Griffin of Noble scored a 6th place finish in the 800m in a time of 2:30.33.