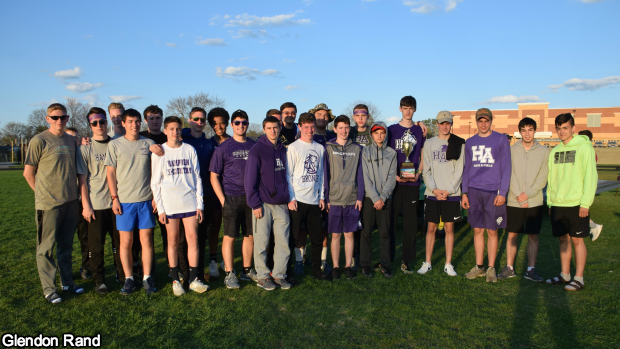 The middle of the season generally provides track and field coaches with a great barometer of where their teams stand.

With victories at the Brewer Invitational Relay Carnival - or "BIRC" - on Saturday, the Hampden boys and Brewer girls established themselves as PVC contenders.

The Witches lapped the field in the girls' meet, piling up 124 points, an impressive output for a relay meet, while Hampden and Old Town each tabulated 88.

Rounding out the top five were Orono (65) and Belfast (43) in a meet that drew a dozen schools to Brewer.

While the Witches were victorious in only three relays on the track - the 3x60-meter shuttle hurdles, the 1600-meter freshmen medley and the 1600-meter sprint medley, Brewer more than made up for that in the field events.

The Witches claimed top honors in the triple jump, pole vault and discus relays, in which the top three jumpers and throwers combine to make up a total distance, and were second in the javelin, high jump and long jump relays.

Morgan Honey was Brewer's top triple jumper, with a mark of 34 feet, 5.25 inches while Kaitlyn Helfen cleared 9-6 in the pole vault and Cassie Hillman threw 85-1 in the discus.

The field events featured some other impressive mid-season marks, including Lauren Melanson of Orono heaving the discus 104-7, MCI's Christa Carr throwing 36-0.50 in the shot put and Christie Woodside of Hampden posting a mark of 34-7 in the triple jump.

The boys' team competition was far closer, with Hampden eking out an 82-75 win over Brewer while Orono' 65 points was good for third.

Rounding out the top five were Belfast (60) and George Stevens (49).

The Broncos were a bit more dominant on the track, going on to win four running relays, with Hampden topping the field in the distance medley (1200-400-800-1600), the freshmen sprint medley, the 3x800-meter race walk and the 1600-meter sprint medley.

That was good enough to counter the Witches' throwing event dominance, as Brewer posted wins in the shot put and discus relays, with Jacob McCluskey leading the way in the discus with a throw of 141-1.

Hampden's prowess in the distance events was on full display, as the Broncos' Wyatt Lord, Parker Harriman, Grahame Sokoloski and Jason Mathies posted a solid 11:29.52 in the distance medley.

The Broncos also went 1-3 in the sprint medley. 