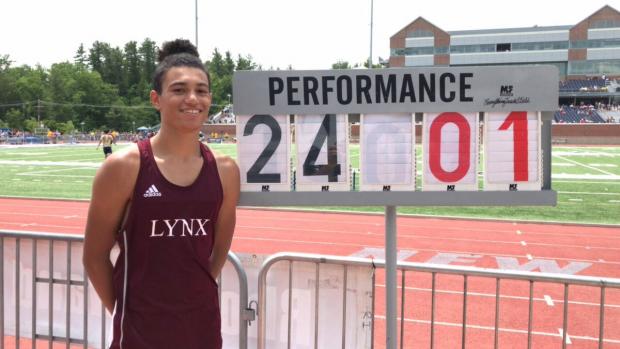 Cayden Spencer-Thompson once again shined under the bright lights as the junior from Mattanawcook Academy won a pair of New England titles on Saturday afternoon at the University of New Hampshire.

First up was the long jump where the Class C record holder got out to new personal best of 24-1 3/4 on first attempt of the preliminaries with his wind legal mark. That mark vaulted the All-American triple jumper into the lead, and broke the Maine all-time best of 23-5 1/2 set back in 1990 by Kennebunk's David Eagleson.It currently ranks him 29th in the country in the event.

On his second attempt with a 3.1 wind behind him he went 24-1 1/4 the second best jump in state history.

Spencer-Thompson's specialty the triple jump was up next, and the New England runner-up from a year ago found himself in an unfamiliar spot with one jump remaining in the preliminaries, he hadn't punched his ticket to finals after  jumping 43-7 3/4 on his first and fouling his second attempt. The junior focused mentally and secured his spot in the final with a wind legal 46-10 1/2 mark that moved him into second place overall heading into the finals.

In the finals he wasted no time in getting a big jump, on his first attempt he hit the board perfectly for the first time all day and with a 3.5 meter per second wind at his back leaped a new Maine all-time best 48-3 3/4. That moved him into first and would secure his second title of the day.

Bayak opened at 5-3, and preceded to clear the bar as it raised two inches on her first attempt each time. This clean record put her in the lead, one she would never relinquish throughout the competition.

With the only clearance in the field at 5-11, Bayak equaled her personal best and Maine all-time best.

She took three attempts at a new personal best but came up short.

"6ft is like 5-8 was for me, once I clear it will become consistent, it's not something I'm worried about" the champion said after winning.

She'll be off to Greensboro, NC for the New Balance Outdoor Nationals this coming week, this will be her first time competing in the event. She enters as the 6th ranked jumper in the country.

Bayak won't be heading down for the experience, she has one thing on her mind.

"I want to win" she said emphatically.

Thornton Academy junior Jason Montano dominated the competition in Maine all spring, and he continued his dominate on Saturday as he took the title with a personal best and Maine #6 all-time performance with his 59-2 1/2 effort.

Montano who won the Class A title a week ago came out firing on his first attempt as he secured a berth in the finals with his 57-3 1/2 heave.  He secured the title on his second throw with a 57-11 1/4 bomb, the second best throw of his career.

He also won the indoor new England title in March.

In the discus Montano added another All-New England honor with his 155-11 effort to finish in sixth place. 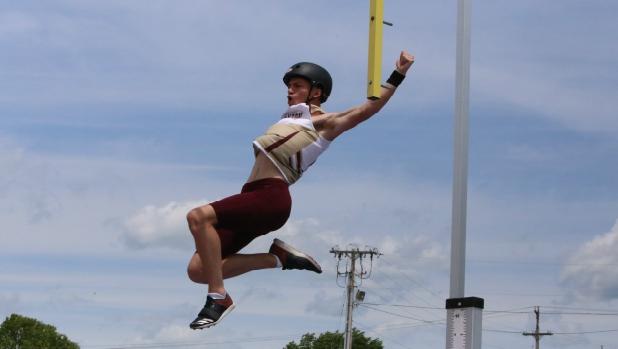 Travis Snyder of Thornton Academy joined his teammate on top of the podium as the junior bested the pole vault field with a personal best 15-9 clearance. 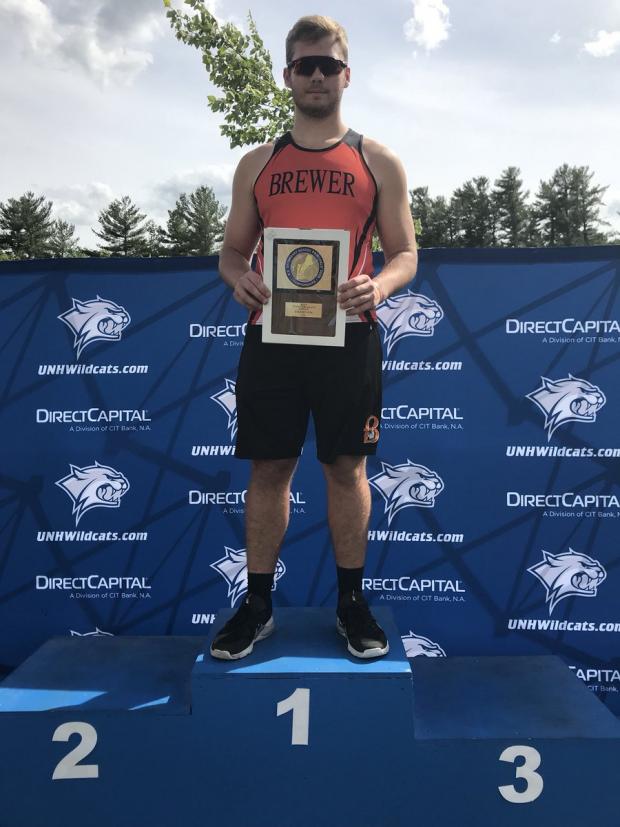 Brewer's Jacob McCluskey won the New England title in the discus on his final throw with a 168-01 effort. The junior who had shoulder surgery this winter, improved on his third place finish from a year ago.

McCluskey who won the Class B title a week ago started off with a solid 161-9 effort that put him into the lead after one throw.

He slipped back to 4th with one throw to go before he unleashed his winning throw. 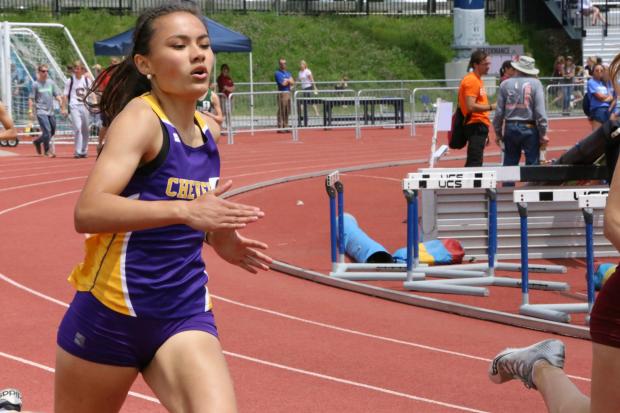 Cheverus freshman Victoria Bossong set a new Maine all-time best in the 400m as she clocked 56.27 to finish just .02 off the title.

Bossong's mark erased the two year old 56.57 mark of Emily Turner. With that mark she also added school, and class records to her impressive resume. The mark is the 25th best freshman mark in the country this spring.

She would later lead off the 4x400 for the Stags as they recorded a state leading 4:01.61 to win section three. That mark would hold up as they finished 6th overall to earn All-New England honors. Also running where Emma White, Helena Bolduc , Emma Gallant, the team is made up of all under classmen. It is also the 5th fastest 4x400 in Maine history.

Gallant added more All-New England honors with her four place effort in the 400m. Running in section three the sophomore clocked 57.41 to win.

Behind them Marshwood ran 4:03.67 in section to win, that was good for 8th place overall. The time moves the Hawks to 8th best in state history.

Cape Elizabeth's Darcy Cochran had an impressive day in the hurdles as the sophomore placed third in both events to earn All-New England honors for the first time.

Cochran started the day off qualifying for the final in the 100m hurdles winning section three in a time of 15.26 into a -3.5 wind, which was the second fastest qualifying time on the day.

In the 300m hurdles Cochran ran in section three, and after two hurdles had a clear lead, a lead she wouldn't relinquish as she crossed the line in a 45.39. She would watch section four closely, and her time stood up as she had the third best effort on the day and a second All-New England honor.

Westman did just that as he went for in section three, leading coming into the homestretch he never let off the accelerator crossing the line in 39.22, a new York school record. The mark would hold up for third.

"I did everything I came here to do." Westman commented after his race.

Brewer's Garrett Graham earned All-New England honor in the shot put with his 4th place 55-0 1/4 effort on his final throw.

Graham who won the Class B shot title improved on his 6th place effort indoors at the New Englands to earn his second All-New England of his career.