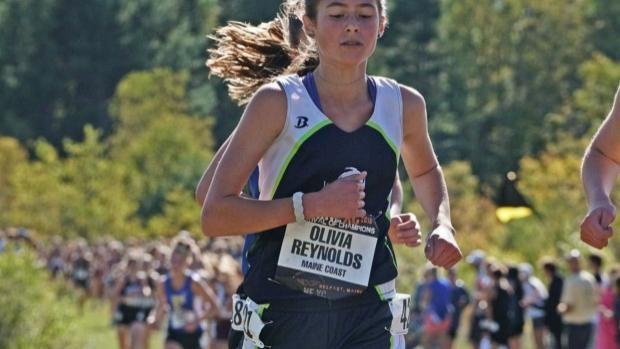 Defending champion Olivia Reynolds of Maine Coast Waldorf is the favorite to repeat as Class C girls state cross-country champion. Reynolds has improved considerably this fall taking her personal best for 5k from a low 20 minute effort into the 18 minute range. In fact the sophomore ran her best time on the course at the Troy Howard Middle School at the Festival of Champions, there she ran 18:47.11 finishing 5th against some of the top harriers in the state.

Reynolds who always runs with a smile on her face, easily won the Southern Maine Regional title at Twin Brook last Saturday, breaking away from the pack after the first 800m, and extending her lead to a minute by the finish.

She has run 57 seconds faster for 5k than any other athlete in the field on Saturday.

While Reynolds figures to be out front a pair of teammates who have battled each other all season long figure to be going at it once again. Orono's Camille Kohtala, 2017 state meet hero, and her teammate Erin Gerbi have races each other eight times during the 2018 season. The Red Riots duo has split 4-4 on the season, with Kohtala winning last weekend's Northern Maine Regional title by four seconds.

A year ago the multi-talented Kohtala use her speed and outleaned Eliza Broughton of George Stevens Academy at the line at the state meet for a runner-up finish, the .16 edge over third place proved to be one the deciding factor in Orono winning the Class C state team title. If she would have finished third, Orono would have been tied with Maranacook and lost the title on sixth runner tie breaker. Gerbi a freshman a season ago was fourth.

With the two lows sticks expected from Kohtala and Gerbi, the Red Riots are in a great position to repeat as team champions.

Maranacook's Molly McGrail placed 6th a year ago, and the junior has herself in position to move up on Saturday. McGrail has been running strong recently with a win in the Class B KVAC race, and a runner-up finish in the Southern Maine Regional Championship a week ago.

Orono is the team favorite, they have won four out of the last five Class C team titles, and barring a collapse look to be ready to bring home more hardware in 2018. Maranacook last year's runner-up bested Maine Coast Waldorf by 4 points to win the Southern Maine Regional Championships, these two figure too battling for the runner-up plaque on Saturday.