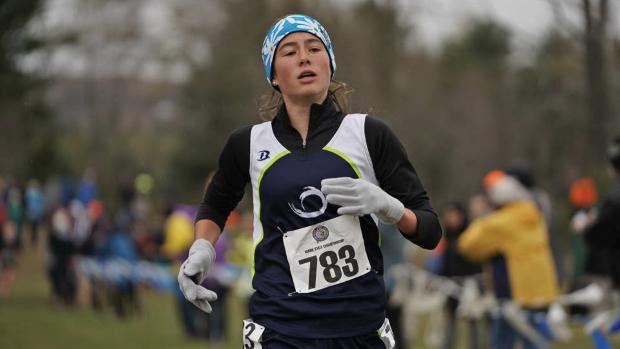 Five times in six years. That qualifies as a dynasty. Last season it took some finish line heroics as Orono's Camille Kohtala had to lean at the line to edge George Stevens' Eliza Broughton for second place. The extra point Kohtala picked up allowed the Red Riot to slip by Maranacook and take the team title. This year Kohtala, finishing fourth, ran nearly alone as she had a comfortable gap on the fifth runner, but was herself fairly far behind the lead trio, which included her teammate Erin Gerbi, Maranacook's Molly McGrail, and eventual winner Olivia Reynolds of Maine Coast Waldorf.

But with three runners in the top ten, and the remaining scorers coming in 15th and 16th, Orono had plenty of margin over second place Maranacook. Orono ended with 41 points, Maranacook 66, Maine Coast Waldorf (81), Waynflete (141), and Monmouth (146). In addition to Gerbi and Kohtala at 3rd and 4th, sophomore Julia White finished 7th, Amneh Wise 15th, and Nora White 16th. Gerbi's 19:17.32 was a new personal best, Wise took a minute off last week's time at regionals on the same course, and Nora White also collected a new personal best mark.

While Orono impressed on a team basis, the top three finishers also impressed. Running to the first mile Reynolds, McGrail, Gerbi and Kohtala were packed together with just paces separating them. After winning Reynolds told Milesplt that she prefers to run in a pack to be pushed. At no time during the race did she feel her position at the front was secure.

The second mile was tough on Kothala as she dropped back a bit but Reynolds, McGrail and Gerbi remained tight, pushing each other, and coming through the two mile mark with Reynolds only steps ahead.

In the end Olivia Reynolds won at 19:05.87. McGrail followed at 19:15 .47, while Gerbi took 3rd at 19:17.42. Kohtala finished 4th and was followed by Kiara Audette of Traip, Sophie O'Clair from Maranacook in 6th, next was Orono's Juila White, Kaitlyn Hunt from Monmouth was 8th, Jenifer Clifford gave Traip two in the top ten, and the final spot went to Dolcie Tanguay of Maine School of Science and Math (MSSM).

Once the champions of each class are determined the entire meet is rescored and the three remaining fastest teams also qualify for New Englands; qualifying on points are Camden Hills, Falmouth, and Mt Ararat. These teams join Orono and other class winners Bonny Eagle and Ellsworth. In addition, the individual champion of each class qualify even if their team did not along with the twenty-two fast times of the merged race.

When the girls races were merged Reynolds time was good for 6th overall, while McGrail also made the top ten at 9th.