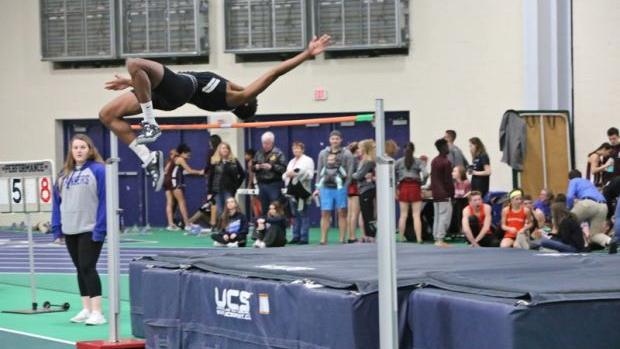 Brunswick junior Sammy Cenescar matched a career indoor best with a 6-6 at Bowdoin on Saturday morning. Cenescar's clearance is equal to US #10 in early season track action nationally. The standout junior also added a win in the 55m hurdles, and the long jump to lead the Dragons.

Edward Little distance star Jillian Richardson won the mile in 5:29.71, then clocked a 11:37.83 for 2 miles to earn the victory in each race.

The shot put was the event to watch on the girls side as Class B state champion Sarah Cox led the way throwing a state leading 36-2 1/2 holding off a strong effort from Christa Carr of MCI 35-1 1/2. the competition included three others who were over 31-8 1/2.

Messalonskee distance runner Peyton Arbour was a standout winning the mile 5:56.70 then doubling back in 12:32.86 to take the two mile.

On the boys side Waterville's Ethan Nurick got out to 41-10 on the triple jump to win the event, that mark is Class B #1 and statewide #2.