Her performance a week ago on her home course set the expectation that a sub 18 clocking should happen on the flatter terrain in Gorham. She broke Emily Durgin's course record at Falmouth by 34 seconds a week ago.

Matson told us early this fall that one of the things she was going to focus on in races this fall was to push out of her comfort zone.

She did just that on Saturday.

"I definitely did, I was feeling super great at the beginning, but I worked through it."

Matson cruised through the mile in 5:21opening up a large gap on the field, she continued the hot pace coming through 2 miles in 11:04, a (5:43 second mile).

The time of 17:29.36 is the third fastest 5k ever recorded by a Maine high school female, only behind the 1985 Kinney Cross Country Championship (Now Footlocker) of Susannah Beck from Waynflete who finished 5th in 17:20.60 , and the 1994 Footlocker National run of 17:25.90 from Gladys Ganiel of Narragaugus who finished 6th.

A 2018 Footlocker finalist her season expects to run into early December so there is plenty of time for the junior to improve on her fitness, and most likely in the process smash a lot of course records. After today she is three for three on the 2019 season.

The next big race will be the Festival of Champions, and a course record there would move her up amongst the all-time best xc runners in state history. Nationally Matson was in the "watching" section of the MileSplit 50 National ranking last week, with her limited nationally exposure she may continue to fly under the radar.

Behind Matson her junior teammate Karly Piers out together a fantastic run as she dipped under Matson's 2018 course record as well with her runner-up finish of 18:13.51. Piers laid back at the start opting not to follow Matson and Gorham senior Kate Tugman who set off on a fast early pace. The strategy turned out to be a good one as she ran solid throughout notching a personal best time in the process and ordering to the results in the MileSplit database the 14th best 5k performer in state history.

Tugman of Gorham who was the winner of the junior/senior race a season ago came across third this year in a fine time of 19:03.90. While her time wasn't as fast a year ago, Tugman wasn't afraid of the challenge of running with Matson and went out with the fast early pace, which likely was a contributing factor to the slower time which was 5th best overall in the field.

Two time Class C state champion Olivia Reynolds of Maine Coast Waldorf once again showed up in a big way in a big race as the junior finished 4th in the J/S race and sixth overall with her 19:15.42 effort. She was followed to line by Marin Provencher of Greely in 19:21.29 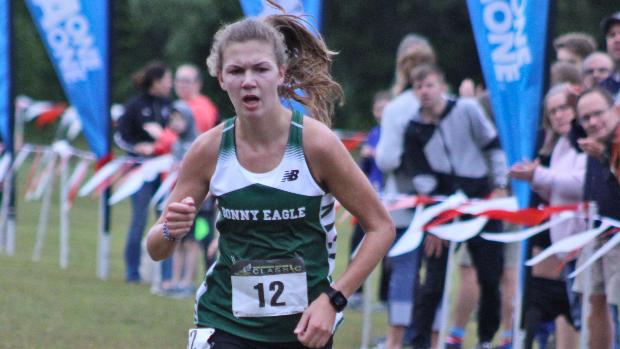 In the freshman/sophomore girls race Delaney Hesler of Bonny Eagle the runner-up in 2018 pushed the pace in hopes of eclipsing her personal best of 18:39 from a year ago.

"I really wanted to run a fast time, so I just tried to go out fast and maintain the pace." Hesler told MileSplit

She did just that as she crossed the finish line in 18:32 this year, seven seconds better. Good for third best overall time on the day.

Behind her Scarborough sophomore Kayla Werner had a career day with her first sub 19 effort of 18:50.82 to finish second, and fourth overall.

Megan Randall another Red Storm runner finished third running 19:30.72, she was followed by Bonny Eagle sophomore Emmaline Pendleton in 19:42.34, with Kristen Werner 19:42.66 just behind in 5th.

As expected the top ranked Bonny Eagle Scots had the top team as they tallied 87 points to finish 42 points in front of the runner-up Scarborough. Gorham (137) was next followed by Portland (158) & Falmouth (159) to round out the top five teams.