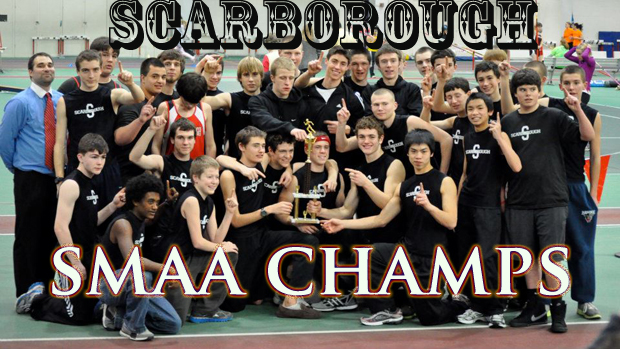 The Scarborough boys successfully defended the SMAA Southwesterns indoor track title on Saturday behind a strong effort across the board from their junior, senior & open divsion athletes. The Red Storm tallied 156 points throughout the day, with runner-up Gorham scoring 122. The meet was very close until the jr boys 200m, where Scarborough's Austin Doody who entered the race as the 6th seed with a 25.06, sprinted his way to a runner-up finish running a personal best of 24.67. After that race the Scarborough boys hit the accelerator and never looked back using a 1-2 finish in the 2 mile from Robby Hall & Jack Sullivan to widen the margin even further. Scarborough won 3 events (Mike Pino-Jr Shot Put, Alec James-Pole Vault & Robby Hall 2 Mile) on the day but had great depth across several events to aid in their title defense.

There were several outstanding performances on the day, including 11 new league records. In the junior division Andrew Smith of Thornton Academy had a stellar day, taking the 55m in 6.96 (ran a 6.94 in the trials which was a league record), Smith also won the long jump with a juge leap of 19-5, then he added his 3rd win on the day with a come from behind win in the 200m (24.54), his 2nd league record of the day, he finished off his day with a runner-up finish in the 4x200m relay. For his effort Andrew was named the outstanding junior division performer of the meet.

Another standout in the junior division was Travis Grant of Gorham, Grant shattered his own league record in the 55m hurdles running 8.06. Grant followed that up with a win in jr triple jump leaping a personal best 38-11 1/2 on his final attempt, he also ran on the record breaking and winning jr 4x200m relay to close out the meet, & earned a runner-up finish in the long jump 18-7 1/4.

Other juniors that stood out where Mike Pino (Scarborough) who broke his league record by over 4ft, throwing a huge personal best 47-7 3/4. Jon Day of Gorham took the jr. 800m title breaking the league with his 2:08.68

In the senior division Deering's Anthony Miller had a strong meet, Miller took the 55m in record breaking fashion with his 6.72, just edging out Ethan Beaulier 6.74. The surprise of the meet for Miller came in the long jump an event he hadn't competed in all winter, the results proved the Deering coaching staff made a wise move, when Miller took first with a leap of 20-1 3/4. To close out his day Miller anchored the Deering 4x200m relay team to a 4th place finish. For his outstanding performances Miller was named outstanding senior division performer.

In the open events Scarborough's Robert Hall had a strong day running anchor of the runner-up 4x800 team who ran the state #2 time of 8:31.69, he followed that up with a 2nd place in the Mile,
& closed out his day with his best performance as he won the 2 Mile in a personal best 10:05.26 with a furious last lap kick. Hall was selected as the outstanding open division performer of the meet for his races

The boys 600yd lived up to its billing as Brandon Cushman (Gorham) & James Campbell (Cheverus) had a great duel with Cushman holding on for the win in an impressive 1:16.33, Campbell ran 1:16.63