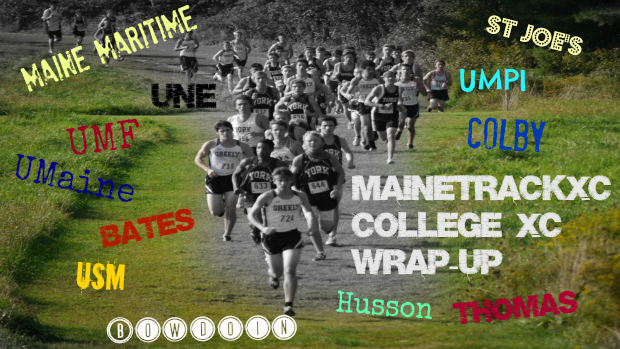 The Paul Short Run is one of the nation's largest cross country meets featuring more than 5,000 runners and over 400 teams.  USM competed in the College Women's Brown race.

Carl covered the 6,000-meter course in a time of 22 minutes, 27 seconds to place 16th overall, and sixth among NCAA Division III runners.

Gazzelloni covered the race distance in a time of 26 minutes, 2.0 seconds to place third overall.  Antoine Gisore, running unattached, won the event with his time of 25:45.2.  Colton Ham of Franklin Pierce University was second in 26:00.2.

WENHAM, Mass. — The No. 4 nationally ranked Bates men’s cross country team showcased its depth on Saturday at the Pop Crowell Invitational at Gordon College. With all of the team’s top finishers from past races this season sitting out this race, Bates still placed first among 25 teams. The Bobcats scored 61 points, nine ahead of runner-up Westfield State.

WATERVILLE, Maine --- Husson University's Alecia Palmer was the first collegiate runner across the finish line and the Colby College women's cross country team won their own invitational by taking places four to 10 on Saturday.

The Mules won the event with a score of 20 and were followed by Husson (59), Maine-Farmington (81), Southern Maine (87), Maine Maritime Academy (155), and Thomas College (174). Unity and Maine-Augusta also competed, as did the Nordic skiers for Colby.

Jeff Tucker of the Colby Nordic ski team won the five-mile race in 29 minutes, 39.86 seconds. Letourneau crossed first for the Mules in 29:52.22.

Colby finished with a winning score of 21 points and was followed by Maine Maritime Academy (66), Thomas College (77), Maine-Farmington (82), and Husson University (124). Unity College and University of Maine at Augusta also competed in the meet.

In only her second week of collegiate cross country, Theberge posted a 26:26.48.  Unattached runner, Olga Golovkina won the race in 20:22.24, followed by Husson's Alecia Palmer at 20:33.23. Palmer led Husson to a second-place finish, while Colby, with seven runners in the top 10, won its own meet.

Mariners Second at Colby; Kataria and Roy Finish in Top 15

Kataria ran the five-mile course in 31:30.91 for a 13th place finish in the field of 62. An individual entrant, Jeff Tucker, won the race in 29:39.86. Four consecutive Colby runners followed Tucker across the line, leading the charge to the championship at the Mules' event.

In the men’s 8000m event, junior Jackson Fortin (Jefferson, Maine/Erskine Academy) ran to a seventh place individual finish with a time of 30:21.43, as the UMF men’s cross country team finished fourth out of five teams.