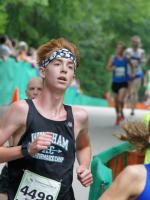 Salute to Seniors: Ben Breton (Windham High School)...
In the coming weeks many of our seniors will head out to start their college careers both athletically and academically. We wanted to salute them one more time in this special feature and say thank yo...

XC 2016: Top 100 Fastest Returning 5K Boys...
We are kick starting our fall xc coverage with the top 100 returning 5k times from our 2016 returners. We will continue our fall xc previews throughout the next couple of weeks as we prepare for the s...

XC Watchlist: Ben Breton - Windham HS...
As part of our 2015 XC preview we will spotlight each of the fastest returners based on 5k times from a year ago as part of our "Watch list"....