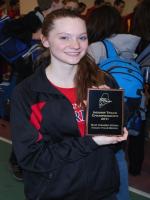 Tomaszewski has lofty goal...
Denzel Tomaszewski could look at the outdoor track season as a new beginning after a year of surgery and rehab. Instead, the Wells junior is treating spring track as a continuation of his record-setti...

Peterson chooses Wheaton...
New Gloucester, Maine – Amanda Peterson (Gray – New Gloucester High School) will be a Wheaton Lyon in 2012.  Her decision to choose Wheaton College was made after a lengthy recruiting process. ...

WMC Girls Indoor Track All-Stars...
The WMC has announced its Girls All-Star teams for the 2011-2012 Indoor season, check out who excelled....

WMC Championship Preview...
The WMC championship action will get underway at 4:30pm with the field events from the Costello Athletic Complex on the campus of the University of Southern Maine. Check out some of the top athletes i...
Peterson sprints way to state leaders at 100m & 200m @ ...
The Gray New Gloucester Boys took their home today, while in the girls meet the visiitng Greyhounds of Lisbon were victorious. There were several top performances, highlighted by Amanda Peterson (GNG)...
Amanda Peterson sprints to state leader 100m @ York | J...
Amanda Peterson (GNG) sprinted her way to the top of the state leaderboard during the WMC meet @ York today. Peterson blitzed the 100m in 12.5h, & 200m in 26.2h, the 100m time is a new state leader, w...
Big throws highlight Tom Foley Invitational...
The Tom Foley Invitational opened up the new track & filed facility at Falmouth HS. The new track facility produced some big marks in the throws as well as some fast times on the track. Highlights inc...