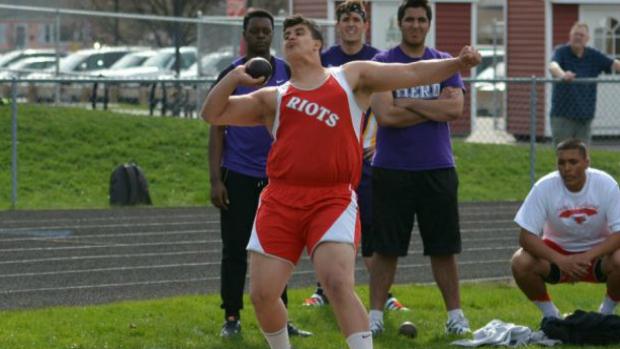 Another record breaking throw for Guiliani

In the same circle that he won the Class A state championship last June, Guiliani put on a display never before seen in the state of Maine. His opening effort of 65-9 1/4 broke his previous best and state all-time best of 65-6 set back on April 22nd in his home circle. The second attempt was a strong 64-10 effort, followed by another state record throw of 66-4 1/4 on his third attempt. The burly junior saved his best for last as the 12lb shot exploded out to another record throw of 66-5.

How impressive was Dan's series of throws? No one in the state has ever thrown further than 61-1 1/2 before this season, and all 4 of his efforts were over 4ft better than the old record. Last spring his winning state meet effort was 53-6 and his runner-up finish in the New England meet was 54-10. A less than a year ago his personal best stood at 48-3.

Dan will get his next shot to extend his best at the Cumberland County Championship meet held on his home circle at South Portland HS. The New England record of 67-10 3/4 by Jeff Chakouian is well within reach with the championship meets right around the corner.

"I've been working hard at accelerating more at the end and slowing down more at the start." Guiliani said about his improving technique.

Is the magical 70ft barrier in his future? "I truly believe I can do it by the end of the year, I never thought I'd be even be discussing 70ft".