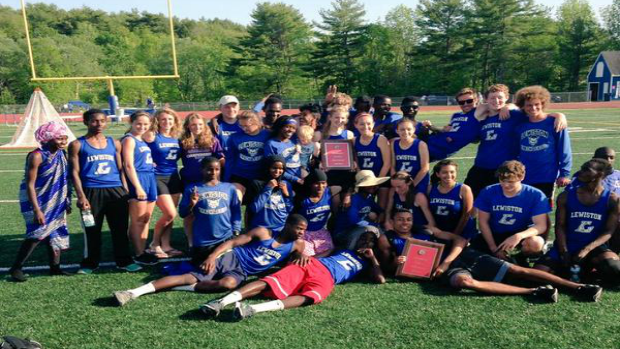 The Lewiston Blue Devil girls were 30 points better than runner-up Edward Little as they tallied 125 points to capture the KVAC Class A title.

Senior sprinter Heather Kendall did the heavy lifting for Lewiston as she took the 100m dash in a time of 12.76, she added another victory in the 200m as she clocked a speedy 26.39. She also ran a key leg on the 4x100m relay which lowered its state leading time to 50.54 with their victory.

Lawrence's Abigial Weigang set a new state leading mark in the 300m hurdles as she was under 46 seconds with her 45.99 effort, she also finished as the runner in the 100m hurdles with a strong 16.05 performance.

Skowhegan's Maddy Price won the triple jump with a seasonal best 35-5 3/4. Price was also the runner-up in the 100m

The Lewiston boys had to overcome adversity to win the KVAC Class A title on Saturday at Morse HS. The Blue Devils top sprinter Hassan “Speedy" Mohamed went down in the 400m with cramps and was unable to finish the meet. That didn't stop the rest of Lewiston squad for stepping up to the challenge as they pulled away from rival Edward Little to win the title by 14.5 points.

Senior Isaiah Harris did his part as he provided a scintillating anchor leg to bring home the Blue Devils in first place in the 4x800, as they clocked state #2 8:13.95. In his speciality the 800m Harris broke Will Geoghegan's 5 year old league record with his state leading 1:54.37. Harris wasn't done as he came back to run a personal best 22.65 to win the 200m. He closed out his day anchoring the Blue Devils 4x400m relay to a state leading 3:30.69

In one of the best race of the day junior Osman Dorrow of Lewiston held off a fast closing Aaron Willingham in the 3200m. Doorow took the win in a state leading and personal best 9:38.07, just .02 ahead of Willingham.

Mt Ararat's Andrew McCracken won the pole vault with a 13-0 clearance. While Brunswick's Keenan Welzel won the 400m in 50.87, with teammate Chris Tanner right behind with a 51.20. Welzel and Tanner returned to finish 2-3 in the 800m.

Triple jumper Nate Pratt-Holt the defending Class A Champion jumped out to 43-6, a new seasonal best and moving him to #4 in Class A. Pratt-Holt added a second win with a 20-5 effort in the long jump.

Edward Little's Brandon Henry won the javelin with a chuck of 155-2, while teammate Spencer Dunn provided another 10 points with his 7:02.36 effort in the 1600m race walk, the time is state #2.