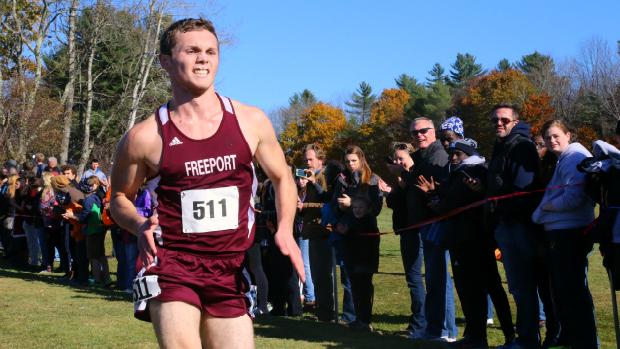 Freeport's Chandler Vincent finished as the state runner-up a year ago, and returned in 2015 as the favorite based on those results.

Vincent got his 2015 season off to a strong start with a pair of wins, and running under 17 minutes 3 times.

Then came an injury to his foot that kept him out of racing action for close to three weeks, Vincent returned at the WMC Championship running to a runner-up finish, the same day he received a cortisone injection in his foot.

Fast forward to Saturday, Vincent found himself in the lead pack along with Yarmouth's Luke Laverdiere, teammate Henry Jaques, & Ryan Morrison of Greely. When Jaques made his move to front, Vincent & Morrison where the only to go with him.

Over the final mile, the rugged Vincent was able to summon the strength to pull away.

"I went in with the mindset that I was going give it my best shot to go for the win, I'm glad it worked out." Vincent said after the race.

Chandler came down the home stretch alone as he crossed the line in 16:34.72, 7 seconds clear of his teammate Henry Jaques, giving the defending champions, Freeport, two low sticks.

Behind the 1-2 finish of Vincent & Jaques, Freeport repeated as Class B team champions as they scored 52 to hold off a strong effort from York who was 10 points back with 62.

Freeport got another great effort from senior Eric Brobst who finished 6th in 17:16.70. Freshman Alex Les finished 19th, while sophomore Thomas Doyle in 30th rounded out the scoring 5 for the Falcons.