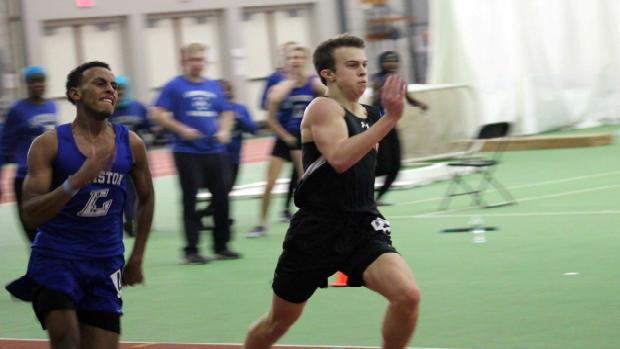 Senior Keenan Welzel of Brunswick used his superior kick to win the Class A 800m state title. Welzel's kick was unmatched as he won his first individual state title, a year after finishing a the runner-up. We caught up with him to ask about his preparations, the trust in his kick, & his goals for outdoors.

What were your preparations leading up to the state meet?
Preparing for the State Meet really began when I decided which event I wanted to focus on and really compete in. I had contemplated running either the 200m or the 400m, but decided to stick with the 800m. From there my training was a combination of track and soccer practices throughout the week. During my track practices, I focused on 400s in order to be able to handle the pace of the race if the first 400m ended up being sub 60. Besides that, my everyday routine wasn't changed.
How did you deal with the pressure and emotions that come along with competing in a state meet?

Dealing with the pressure of the meet wasn't really something that bothered me. I knew I had done everything I could've to prepare for the race, and I had the support of my family and loved ones there to watch and cheer me on. But something that really geared me up to run that day was when I read a quote from my Aunt Jane who passed away from Pancreatic Cancer in August of 2014. She was a 5-time Olympic marathon qualifier runner and even was the first female American finisher in the 1992 Boston Marathon (10th overall). The message read, "Your brain will give up on you before your body does. If you can convince your brain that you can do it, I think you'll surprise yourself! It's all about keeping a positive mental state while you race,". After reading that, I knew whatever happened out there I was going to take with a positive approach. Even through the race being restarted and having been almost in last at one point, I always tried to keep positive and keep my emotions in check and just run my race.

You finished 2nd a year ago in the 800m, and were able to win the race this year. Did the race play out how your figured it would?When did you know you had secured the win?
Being able to end my indoor track career as a state champion was the icing on the cake for this season. Last year was tough, and just narrowly being defeated by my teammate was a hard pill to swallow. With both of us training to outdo the other at every practice and at every race, finishing behind him was tough to deal with. However, I knew that this year I had the chance to go out on top. Before the meet had started I had talked to my Coaches about what my best plan of attack would be in order to win. We had chalked up the idea that which ever runner makes their move when the other runners aren't expecting it, then they would go on and win the race. When I began my kick on the final lap, it took a lot of my competitors by surprise. Just as we had drawn it up, the kick at the end is what caught everybody off guard, and nobody expected me to pass that many people within the last 100m. Once I passed Osman, even then I didn't think I had secured the victory. Those last 50 meters felt like eternity, and I was only consumed with the notion that I had won when I had completely crossed the line. Even then, I still couldn't believe it, so made sure I was about 10m passed the finish line so I could know for sure.
Coming into the season what were your goals and did you achieve them?
Coming into the season I didn't have a set event for myself and so my only goal was to do the best in whatever I competed in. Whether it was the 200m or the 400m, which is what I ran the majority of the season, I prided myself in going out and giving it everything I had. I only had run the 800m once prior to the State Meet, so going into the race being only my second time running it for the year my only goal was to try to get sub-2 and do better than my seed. Unfortunately I still haven't crept under the sub-2 mark in an open 800, but I was more than happy with accomplishing what I desperately desired to achieve the year before in the 800m.
How do you think winning an individual state title will effect you heading into outdoors?
For outdoor, my guess is that I will try to focus on the 400m and the 800m. However, I can see myself still trying to compete in the 200m and maybe even the mile. I'm really excited to see what I can accomplish once I get outdoors and I'm hoping that in whatever event I decide to focus on I will do nothing less than my absolute best.