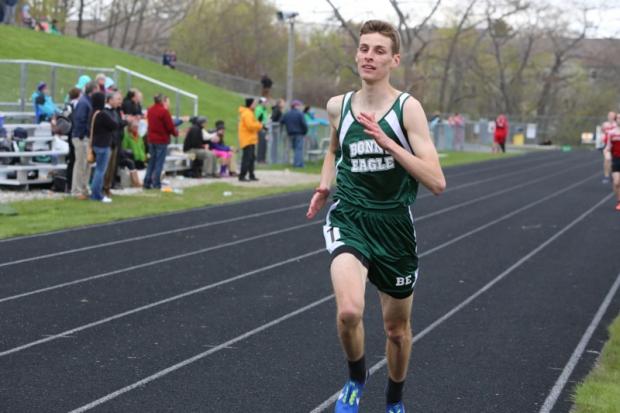 Ben Steeves came onto everybody's radar this year when he first went sub two in the 800, clocking a 1:59.99 back in January. Following that, Ben contended for a chance at winning the indoor 800, and came up second with a 1:57.08 in what was one of the fastest Maine Indoor States 800 races in recent history. By breaking two, and then nearly breaking 1:57 in the same season, Ben proved he was ready to compete at an elite caliber this year. I had the chance to catch up with Ben on Wednesday, and we discussed goals for this season, what he attributes his success to, and his hopes regarding collegiate track.

Hardly losing the 800 with such a fast time at the indoor state meet has left Ben hungry. He's started off the season flying, there's no denying that. Last week he clocked a whopping 1:55.31, making him the fastest 800 runner in the state this year. Ben said it feels great, and he's hoping that "the next four Saturdays will lead to some very fast times". Ben followed that blazing fast 800 last week with some speed work this week, running a 51.58 in the 400, ranking him fourth in the state and third in Class A. He can run a fast 1600 too, having ran a 4:32.51 earlier this season. Having faced no injuries this year, and experiencing amazing success, he's looking to do big things when it comes to be championship season.

Often times competitors will focus on either time or placement in championship season, but Ben's reaching to do great in both. Bonny Eagle's currently seeded second in the state meet, leading Ben to "want to do his part scoring points". He then added, "I also do want to get the times down, and I'm in the back of my head thinking 1:53 would be really sweet". Ben also said "there are some weird options going on for states", regarding event lineups, and didn't want to delve into details. The showdown this June however, could possibly be a matchup between Messalonske's Owen Concough & Zachariah Hoyle and Ben in the 800. With his 1:55.31, Ben will prove to be a formidable opponent.

Ben attributed his outstanding success on the track this year to his coaches, and to his teammate Caleb Pendleton. Ben had never done outdoor in the past, and claimed that his new coach Mike Burlson inspired him to try it and run fast. Ben added that, "Just seeing the times get quicker and quicker is just giving me a motivation of my own", indicating that Ben's individual drive is becoming all the more powerful as a result of this. Having always played lacrosse in the past, it was tough to give up, but "worth it to take track to the next level". Caleb Pendleton also used to play lacrosse, so he and Ben encouraged one another that outdoor track would be worth it in order to prepare themselves for collegiate track.

Beyond states, Ben is looking forward to attempting to possibly score at New Englands in the 800. There he said he hopes he can possibly qualify to compete at Nationals. Next year Ben is attending Worcester Polytechnic Institute where he will compete collegiately as a mid distance runner. Regarding this, Ben said "I'm going to keep focusing on the 800, and I know a few guys there and think I'll fit in on the team pretty well". If anything, his sudden breakout as a talented athlete shows that Ben's potential has just barely been tapped into. His speed, ranging all the way up to the mile portrays his versatility and gifted ability to compete on the track. Ben Steeves is going to do big things this outdoor season, and by the looks of things, he's just getting started.