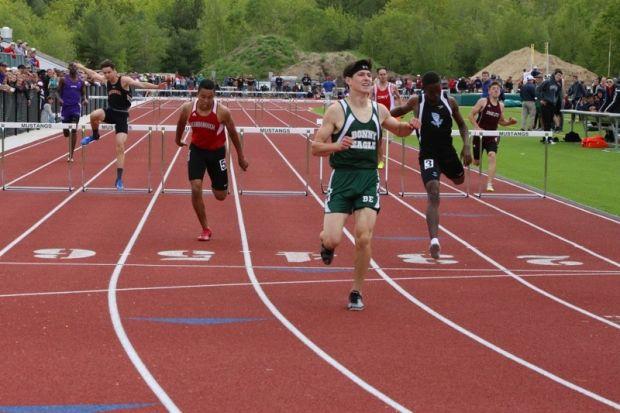 My most memorable race would have to be without a doubt winning my first and only state title at states this past outdoor season for 300mH. Not only because it was first/only title and a huge PR, but also because it was at Massabesic where I have had NJROTC classes for four years and some of the cadets from my unit were there to direct traffic and see me run.

Over the past four years, my biggest competition is Shammah Gahomera. At the beginning of Junior year, I saw Shammah as an inspiration and goal of what I want to be as a runner. And I put in a lot of work to try and get to his level. By the time senior year hit, I was finally at his level and he has helped push me in many races to big PRs. He has also just been a phenomenal athlete to run with.

My greatest accomplishment is definitely becoming State Champion in the 300 meter hurdles. It was a something I had dreamed of since 6th grade and I never thought it would be possible until the middle of my senior season. That feeling of accomplishment when I hit that finish line is like nothing I had ever felt. 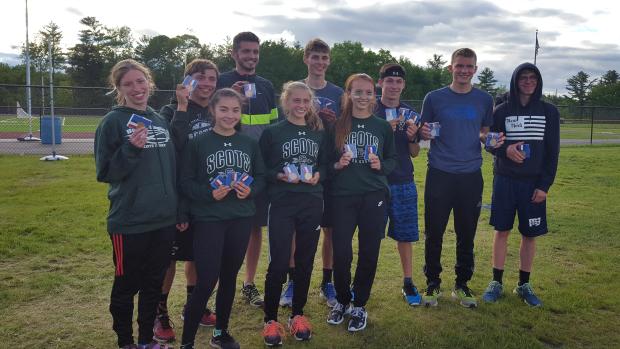 Remembering the relay baton for the 4×200 in last years indoor southwesterns. My team still has not let me forget it AND the baton!

(This isn't as running-related, but it's more. How running has helped me overcome it.)  My biggest obstacle has been overcoming high functioning Autism. It use to hinder my learning skills and especially social skills severely. Over time with a lot of types of therapy I wasn't affected as much academically but still struggled socially. Running in cross country and track became a place for me to make friends in an extremely friendly community where great sportsmanship is the standard. Running and being on the team has helped me have friends and learn to be more social. I am still pretty awkward (and proud of it!) but I have come a long way, thanks to track.

Though Cross Country was my least favorite of the three tracks I did all year, I will miss the most going on Cross Country long runs with my teammates through the woods at Johnson Field for pre-season. 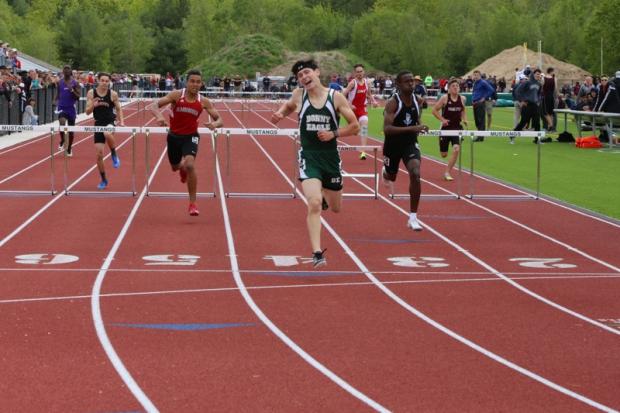 My biggest advice would be that the athletes you compete against are not your enemies! Your only enemies are the clock and your old pr! Also eat a lot of cucumbers!

Over the years, the Bonny Eagle boys' team has not had good consistency with coaches. But I believe that I've received good traits from each coach and have been influenced by them all. From my first coach, Greg Wilkinson, he was the one to get me into 300mH and he showed me the value of following through with your choices and actions. If it wasn't for him, I would have quit track my freshman year. From my second coach, Chris Strout, he taught me the value of perfecting my craft and making sacrifice for the sport. It was with him I started to see my value in track and realize my potential. And with my third coach, Mike Burleson, he taught me that confidence in my performance is what can make all the difference.

Starting in the fall of 2017, I will be running indoor and outdoor track and field at the University of Maine in Orono while studying Exercise Science.

I would like to thank my three coaches I've had for high school, Greg Wilkinson, Chris Strout, and Mike Burleson for getting me to where I am today. I also would like to thank my whole team for helping motivate me with their efforts in their events to want me to also do my very best. Lastly I'd like to thank those I have competed with for the past four years consistently. If it wasn't for them pushing me, I wouldn't have the motivation to get to this level.

To all athletes reading this: Don't forget the baton, eat cucumbers and send it! #inheadbandswetrust