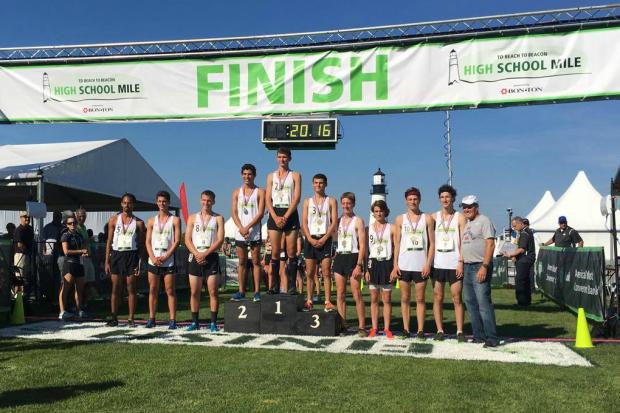 The TD Beach to Beacon 10K, Maine's premier running event, draws talent from around the world and induces Maine's top runners to return year after year to compete for prize money and glory. The lottery for non-professional entrants is competitive in itself. Serious amateurs from around the state set up their laptops early on registration morning in hopes of securing a coveted bib.

In 2016 organizers added a special event, the B2B High School Mile, on the eve of the 10K itself. Its aim is to provide a showcase for Maine's talented high school athletes, to celebrate their achievements, to provide a festive prelude to the next day's big race, and to offer a glimpse of Maine's developing talent.

The race itself is a two-loop course beginning near the Portland Head Light and ending across the official TD Beach to Beacon finish line in Fort Williams. The 2016 inaugural race drew ten male entrants and eleven females along with more than 400 enthusiastic spectators. The winners were 2017 graduates Tia Tardy and John Hassett, both multi-time state champions in Maine.

"We couldn't have asked for a more exciting first event in 2016 and we're looking forward to expanding on that success this year," said Joan Benoit Samuelson, the Maine native and Olympic gold medalist who founded the TD Beach to Beacon 10K. "Our aim with the B2B High School Mile is to celebrate the achievements of dedicated and passionate high school track and cross country athletes from throughout Maine. We hope to attract the best and then bring out their best."


The second running of the B2B High School Mile certainly looks to live up to Samuelson's expectations.  The field has grown and become more competitive. The girls race will include 17 runners while 15 boys will run. Each field includes multi-time state champions, conference champions, and team leaders. Mainers come from as far as Lincoln, Caribou, and Presque Isle, and as near as hometown Cape Elizabeth. The girls' field includes one international entrant.