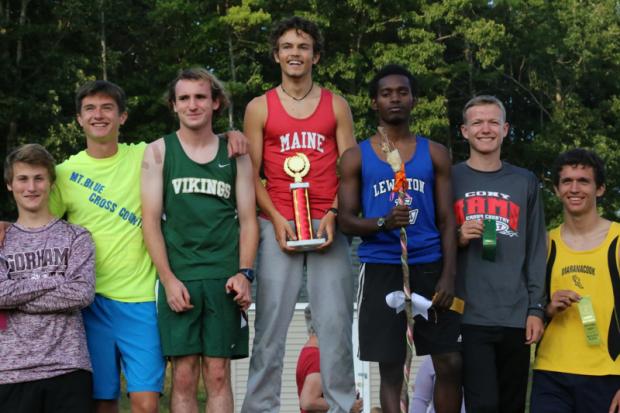 Mt. Ararat loudly re-introduced itself to the rest of the KVAC at the annual Scott Laliberte Invitational Cross Country meet hosted by Cony High School in Augusta. Lisanadro Berry-Gaviria, a sophomore, took command of the boys race early to claim first in the boys' race for the Eagles while senior Katherine Leckbee was the first girl to cross the finish line. Leckbee overtook Edward Little's Jillian Richardson in the open within a few hundred meters of the finish line. Richardson had established a fast pace early running with the top ten boys for much of the race.
The Mt. Ararat boys took the team title while the girls were edged for first place by the Gorham Rams.
The Laliberte is unusual as the varsity boys and girls run the race together. So while Leckbee was the first girl across the line she was nineteenth overall and so scored nineteen points for the girls team rather than one.
Scott Laliberte, the race's namesake, was an outstanding cross country runner at Cony who perished in a motor vehicle accident in 2000. Cony Coach Shawn Totman noted before the race that the meet benefits a scholarship fund in Laliberte's name that last year was able to give two one-thousand dollar scholarships to Cony runners headed to college. The Laliberte family was on-hand to address the crowd and assist in presenting the post race awards.
In addition to recent KVAC powers Cony, Mt. Blue, Brunswick and Maranacook, the meet featured down state power Gorham which gave the meet an air of the state meet. Will Rossignol of Gorham notched a top ten finish for boys at 6th, Meanwhile the girls from Gorham put three runners, Iris Kitchen (4th), Anna Slager (5th), and Kate Tugman (8th), in the top ten. With this bunching the Rams may have served notice that there will be a battle for the Southern Maine title in 2017. For Gorham, the girls totaled 377 points to the 414 notched by second place Mt. Ararat.
In the boys' race Mt. Ararat posted 82 points and were followed by Mt. Blue with 96. Like the Gorham girls, Mt. Ararat put three boys in the top ten as Berry-Gaviria was joined by 9th place finisher Deven Hoskins and 10th place finisher Lucas Bergeron.
Noticeably moderate temperatures made the race a lot faster than last season's edition of the Laliberte which was run in heat and humidity. Berry-Gaviria's 13:45 eclipsed his 2016 mark by 24 seconds. Senior Katherine Leckbee has run this race four times during her high school career finishing top ten three times. Her first place time of 15:34 bested her 2016 time of 17:02 by nearly a minute and a half. She'd run a good race in 2016, finishing 3rd, but the race time temperature was 88 degrees.
Dominic Sclafani of Oxford Hills finished the boys' race 2nd at 14.04 to claim his third consecutive top ten finish. Sclafani bested lasted year's mark by 41 seconds. Third went to Lewiston's Abbas Muktar (14:33), Zeke Robinson of Mt. Blue was 4th (14:35), and Caleb Richardson of the host team Cony rounded out the top five (14:41).
For the girls following Leckbee and Richardson (15:44) was Maranacook's Molly McGrail (16:25) in 3rd with Kitchen (16:35) and Slager (16:48) rounding out the top five.
The course itself is a 3900 meter (2.4 miles) version of the 5K course used when Cony hosts the KVAC meet. In begins on a practice field behind the high school and winds its way through a field surrounding retention ponds before plunging into a wooded conservation area, the Augusta Nature Education Center, maintained by the City of Augusta. It then ascends "the Mountain" a long and steep hill with (if Garmin is accurate) a total elevation gain of 106 feet. The paths are well maintained walking paths with a dirt surface supplemented by wood chips in areas susceptible to erosion. After the mountain the course winds its way through a bucolic retired granite quarry and concludes with a series of three gullies with abrupt climbs and drops of fifteen feet or so before depositing runners back into the open on the Cony fields.
It's a challenging course and most spectators, if they see any of the wooded portion at all, catch just the final rolling gullies.
The Laliberte is an early season race with many runners still out at summer activities but Mt. Ararat figures to contend for the KVAC girls' title this season. While Leckbee is the reigning KVAC and Northern Maine Regional Champion at the 5K and took third in the 2016 State A meet she has most often been far ahead of the next Mt. Ararat girls' finisher. But she was joined in the top ten at the Laliberte by freshman Karli Leighton who clocked a 16:46 for a 6th place finish. Put this together with the improvements by junior Sara York (16th) sophomore Katie Lynch (23rd) and senior Hope Langworthy (25th) and the Eagles will be in the hunt for a team championship this season.