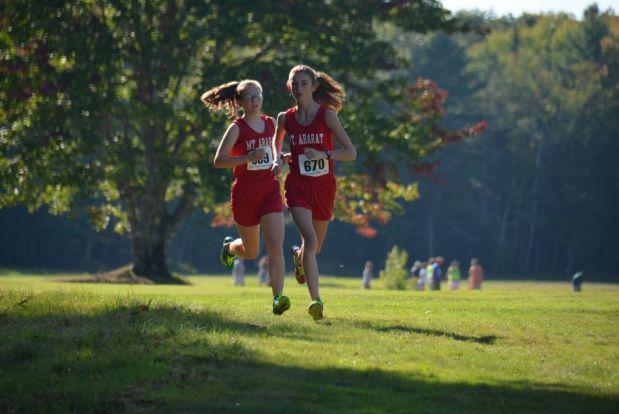 Just four days after the Quabacook Relays Mt. Ararat and Morse visited Brunswick for a conventional 5k race at the Mere Creek Golf Club at Brunswick Landing. The girls teams were joined by Maine Central Institute of Pittsfield.
Mt. Ararat took the team wins in both the boys and girls races sweeping the top three spots in each race. The Morse girls squeaked by Brunswick by a single point to grab the second spot. MCI had four runners so did not figure in the team competition.
On the boys side the Dragons managed to claim the second spot by a comfortable margin over the Shipbuilders.
Katherine Leckbee led the girls race from wire to wire finishing in 19:25, she was followed across the finish line by a duo of Eagles' first years, Camila Ciembroniewicz (20:01) and Karlie Leighton (20:10). Brunswick's Micaela Ashby (20:56) and Morse's Jenny Wilbraham (21:20) rounded out the top five.
Other scorers for Mt. Ararat were Anna Pederson (6th), and Sara York (9th).
Following Wilbraham for Morse were Syd McCarren (8th), Lorelie Pryor (11th), Micailah Albertson (14th), and Emma Gould (19th).
Brunswick scorers behind Ashby were Isabella Pols (7th), Kaitlyn Kelly (12th), first year Maggie Johnson (17th), and Kathleen Koval (21st).
Edith Tierney was the lead finisher for MCI. 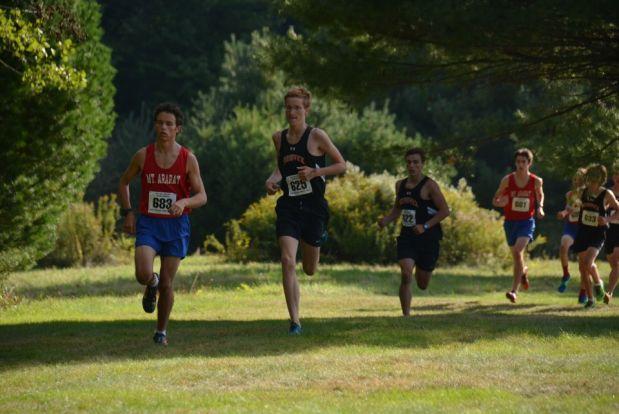 On the boys side Lisandro Berry-Gaviria ran a 16:35 for the top spot leaving teammates Lucas Bergeron and Devin Hoskins to battle for the second spot. Bergeron prevailed by the thinnest of margins. Bergeron ran a 17:43.49, while Hoskins clocked in at 17:43.76. Rounding out the top five were Brunswick's Cam Ashby (17:54), and Andrew Chingos (18:00).
Morse's top finisher was Connor Freeman who crossed the line 8th at 18:34.
Other scorers for Mt. Ararat were first years Nate Cohen (7th), and Andrew Chamberland (10th).
Brunswick's other scorers were first years Aiden Simmons (6th) and Tyler Patterson (9th), along with senior Ryan Olson (11th).
For Morse Ben Brewer (14th), Caleb Avery (17th), Liam Scanlon (18th), and Brady Leavitt 20th) joined Freeman as a scorer.
The Mere Creek golf course is part of Brunswick Landing, land that was once part of the Brunswick Naval Air Station which closed in 2011. Brunswick is using this course as its home course for the second year. The course itself follows the tree line of several fairways adjacent the Kate Furbish Preserve, conservation land conveyed to the the town of Brunswick following the Navy's departure. It should be a relatively fast course as the surface is mainly mowed grass. There are three rolling gullies, two of which take the runners temporarily over golf cart tracks of loose scrabble and wooden bridges traversing wetlands. The runners have three brief road crossings. Race time temperature was 80 degrees and the course was dry.
In addition to taking the two top spots, Mt. Ararat provided two very close races for second and third. In addition to the razor thin margin between Bergeron and Hoskins for second in the boys race, first years Camila Ciembroniewicz and Karlie Leighton ran a competitive race for the second spot behind Leckbee; they left a fair amount of space between themselves and the rest of the girls chase pack. The Bergeron Hoskins match-up looks like it might run on all season. The pair finished 4th and 5th at Mt. Blue earlier this season with only a second between them and both posted new personal bests in this race.
The Morse girls are also benefiting from some internal competition as Jenny Wilbraham's 21:20 represents a new PR ----by almost a minute and a half----which suggests she'll be pushing Morse's customary leader Syd McCarren.
Likewise, the Brunswick boys will be continuing to push each other. First year Aiden Simmons briefly overtook sophomore Andrew Chingos, who ran in the first seeds race for Brunswick last week at Quabacook before following Chingos over the finish line. Junior Cam Ashby is returning to racing form after missing the early part of the season, but expect the top seven positions to remain in flux as the 1-5 split in this race was just 55 seconds.
The three squads will get together again next Thursday the 21st at Lawrence High School where they'll be joined by Skowhegan.