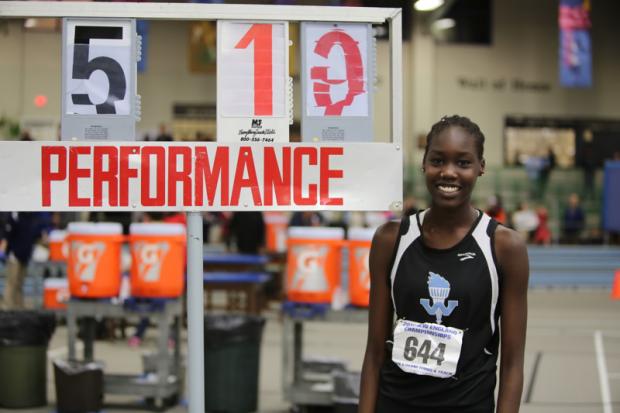 Nyagoa Bayak of Westbrook broke the Maine all-time best in the high jump with a 5-10 clearance to win the New England Championship for the second time in three years. Bayak had some really good attempts at the New England record on 5-11.

Jason Montano a junior from Thornton Academy won the shot put New England title with a throw of 55-10. Brewer's Garrett Graham the Class B champion was 6th with a throw of 52-0 3/4. Montano entered the competition as the top seed, but sat third with one throw remaining before pulling out the victory with his final throw. 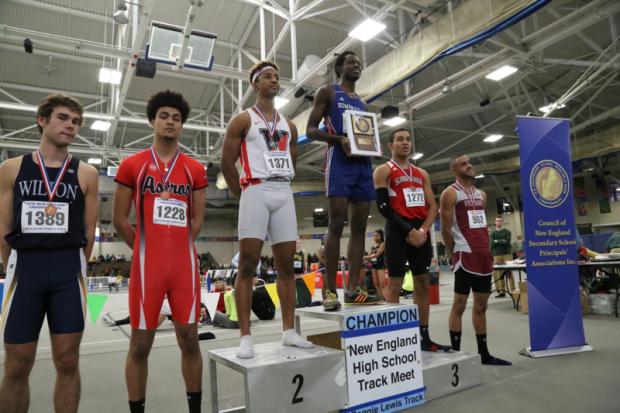 Sprints
Jarett Flaker a sophomore from Scarborough broke his own state meet record in the 300m as he broke 35 seconds with his 34.92 third place finish. Flaker also qualified for the 55m dash final with a time of 6.61, in the final he ran 6.57 to finish 7th just of the podium. 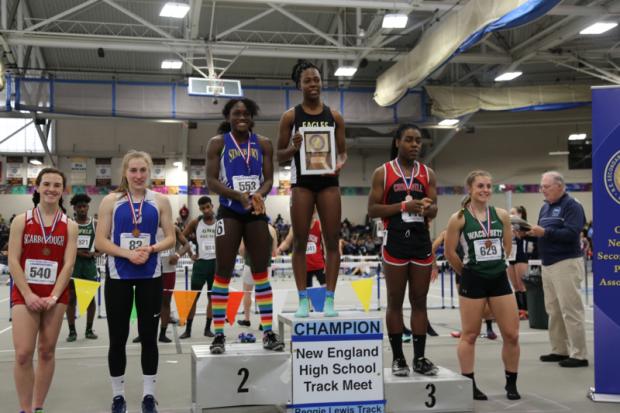 Molly Murnane of Scarborough qualified for the 55m dash final in a time of 7.36, and in the final she ran even faster to nab a 6th place finish to earn All-New England honors with her 7.30 effort. 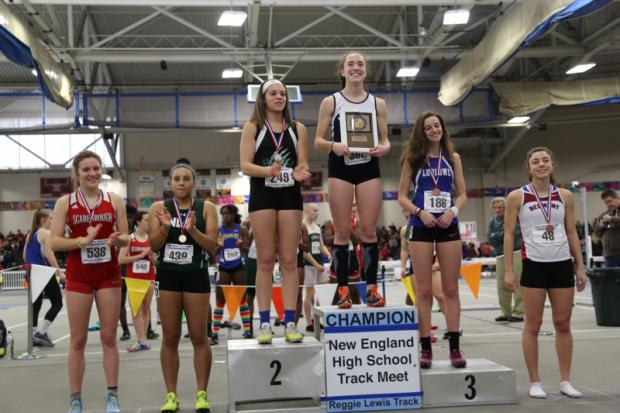 Emily Labbe of Scarborough qualifies for the 55m hurdle final with a time of 8.66, in the final she moved up to the podium with her 6th place finish in a time of 8.58.

On the boys side Class B champion Zachary Beaton of Hermon was 9th as he broke 8 with his 7.98, while Class A champion Dominic Creenan of Westbrook was 10th in 8.0 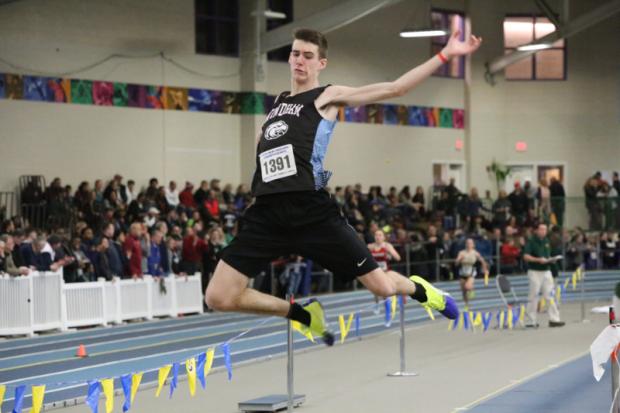 Alex Wilkins of Windham with a new Maine state leader 22-3 in the long jump, he advances to the final with the 5th best indoor jump in state history

Sammy Cenescar of Brunswick was the top boys high jumper with a 6-3 clearance, he was 11th.

On the girls side Orono's Camille Kohtala jumped 17-7 1/2 to place 4th in the long jump. While Class A champion Christie Woodside of Hampden Academy just missed the final with 17-1 1/4 9th place effort.

The Scarborough girls ran the the third best 4x200m relay in state history 1:47.06 to finish just off the podium in 7th place. In the 4x800, the Gorham girls ran a new state leading 9:40.45 to place 10th overall. The time lowered their previous state leading effort.

In the girls mile Malaika Pasch of Falmouth won section 1 in a time of 5:14.65, her time was good for 10th overall.

In the 2 mile Bonny Eagle junior Ami Beaumier lowered her state leading time to 11:17.28 as she won section 1, and finished 10th overall.

On the boys side Class A champion sophomore Lisandro Berry-Gaviria of Mt Ararat battled his way to a sixth place finish in the mile with a time of 4:24.23, right behind him was junior Alec Troxell of Deering who set a new personal best of 4:25.04 good for 7th place.

In the boys 1k Landon Heidrich a junior from Thornton Academy clocked 2:38.18 good for 13th to lead the Maine contingent. While in the 2 mile Yarmouth senior Luke Laverdiere went out hard in the 2 mile and held on to finish 8th in a time of 9:30.30